meta Oil is thicker than Milk :: The Bullvine - The Dairy Information You Want To Know When You Need It

Oil is thicker than Milk

Here is a quick science lesson for everyone.  It isn’t going to be like those boring chemistry classes in high school, where you were more excited about getting to use the Bunsen burner than actually learning something.  This is a political science lesson about international politics.  When it comes to world trade, Oil is far greater and more important to most countries than milk production is.

Understandably Canadian dairy producers are very uneasy with this proposition.  They have enjoyed a stable production environment where they could go to bed without having to worry about what the milk price would be the next day, next week or next month.  But all this is about to change.  As the Canadian government seeks to open world markets through international trade, Canada’s supply management is a constant sticking point.  (Read more: Why the Future of the North American Dairy Industry Depends On Supply And Demand)

Interestingly, and probably funded by those who seek to benefit the most, recent reports from the Conference Board of Canada suggest that the cost of ending milk quota is far less than expected.  (Read more: Cost of Ending Quota Much Smaller than Expected).  According to the study, the Canadian Government could buy out producers who hold quota, about 12,500 dairy farms, for as little as $3.6 Billion to $4.7 Billion.

Armed with this study over the past month, there has been significant media hype in the major publications about how this is “Good for Farmers.”  The news flash is that the Canadian economy would gain $1.2-billion a year and as many as 8,000 new dairy jobs, if the industry were freed to pursue rapidly expanding dairy markets in Asia and Africa.  The story angle is that Canada is losing ground by doing nothing.  The study estimates that Canadian dairy farmers are sacrificing $1-billion a year in lost revenue as milk is being displaced by cheaper imported dairy ingredients and substitutions by oil-based products in everything from ice cream to yogurt.  (Read more:  Canadian dairy producers can grow without monopoly and Dairy supply management costs consumers and farmers) 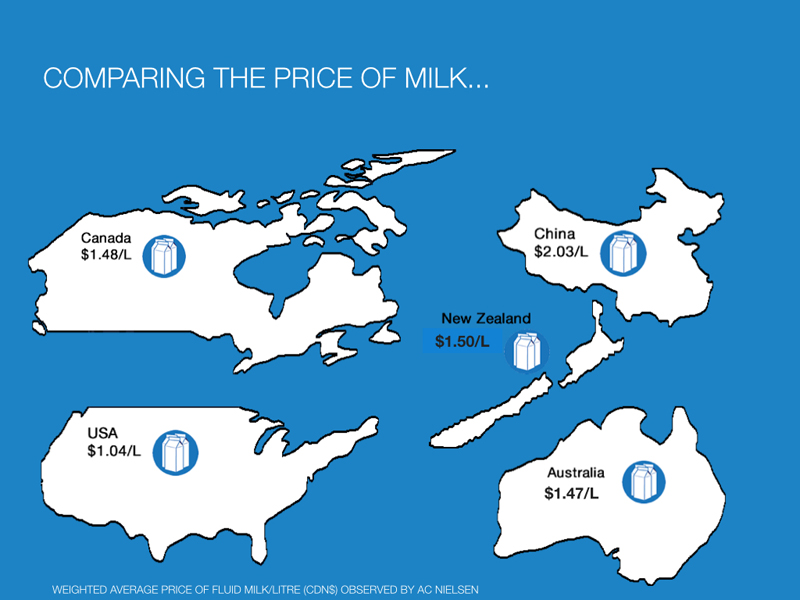 First let’s get real.  Most Canadian dairy producers are not in the position to compete with world markets.  This is e true if you remove quota and don’t replace it with the other forms of unacknowledged subsidies that other dairy producing countries maintain.  As a result of operating under the safe and secure quota system, many Canadian producers have not been forced to become as efficient as those in other markets such as the Western US, Australia and New Zealand.  In 1980, Canada produced 14 per cent more milk per capita than the U.S.  In 2011, Canada produced 21 per cent less.  The average Canadian dairy farm has about 76 cows while the average herd in the US is 187.  (Read more: Where have all the dairy farmers gone? In Depth Analysis of the 2013 U.S. and Canadian National Dairy Herd Statistics).  In order to compete, Canadian dairy farms would not only have to grow but they also would have to manage their operations differently.

But the real issue here is not about what effect this will have on dairy farmers.  It is about what market it opens up for other industries, specifically Oil and Pulp and Paper.  Due to the massive investments in the Oil/Tar Sands in Northern Alberta, Canada has become a significant player in the world oil market.  The potential revenues from these developments make the cost of removing the Canadian Supply Management System look like a drop in the bucket.

The amount of money, especially political funding and taxes, that this Oil movement has behind it is far greater that any backlash that would result from removing supply management from the Dairy industry.  For the average producer, there is no question that the removal of Supply Management is a BAD thing.  There is no question that it will force many 50+ year old producers into early retirement.  Now that could be something that would cause strains on the Health Care system because a displaced dairy farmer does not do well mentally or physically.  It will also force any new young producers to be very afraid to enter the market.  You see, faced with a volatile sales price, milk production will become an uncertain career choice.  So let’s not kid ourselves.  The question of removing supply management from the Canadian dairy industry has nothing to do with what’s “best for the producers”. Removing supply management is totally about what’s best for the Canadian economy as a whole and significant industries such as Oil in particular.  For all Canadian milk producers who have the deluded notion that their concerns are enough to stop the Canadian government, never forget that “Oil is thicker than Milk.”

Why 84% of Dairy Breeders Will Soon Be Using Genomic Sires!
Show Heifer Ages - About as accurate as my horoscope
Germany - Football and Dairy World Champions?