meta Taking a chance on dairy farming in Franklin County :: The Bullvine - The Dairy Information You Want To Know When You Need It

Taking a chance on dairy farming in Franklin County 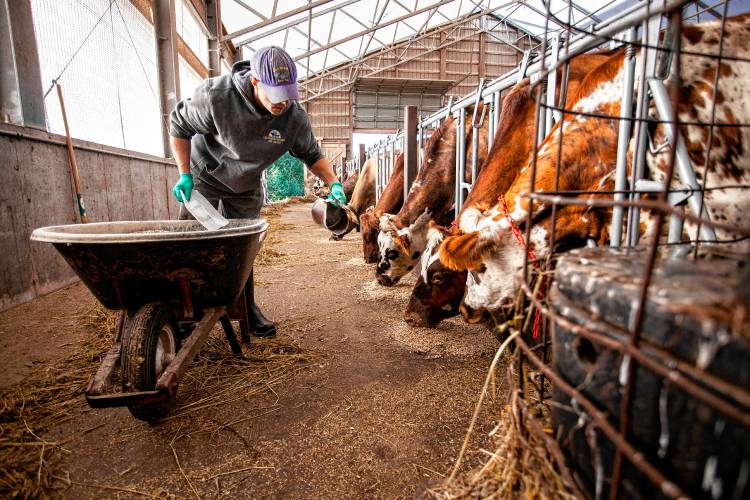 Gus Tafel of Sidehill Farm in Hawley carefully measured grain from a trough for his cattle’s breakfast — a specific amount based on each cow’s milk production. In their stalls, the cows strained at the scent of food, swinging their heads from side to side in excited anticipation.

Outside the milking parlor, the morning air was crisp. Birds sang on overhead wires. Long shadows slanted across the farm’s 225 rolling acres. Across a field, amber tones tinged the green canopy of a distant treeline.

It’s not just the seasons that are changing on Sidehill Farm. Before the end of the year, Gus Tafel, 34, and his wife, Kyra Tafel, 36, intend to purchase the operation from farmers Amy Klippenstein and Paul Lacinski, who started Sidehill Farm in 2001. While signing is a cumulative step in both their respective careers in agriculture, it’s also a transition into murky economic territory.

“The dairy industry is in a pretty poor state. It’s a huge risk,” Tafel said about their plans.

Over the last 20 years or so, the number of dairy farms in Franklin County has thinned from around 75 to about 30. Nationally, the picture is no better — the United States Department of Agriculture reported recently that dairy operations nationwide had decreased by more than 2,700 farms in the last year, a drop of more than 6 percent.

Despite these sobering statistics, Gus Tafel said investing in agriculture in today’s world is a worthwhile endeavor — perhaps more important than ever.

“There’s a disconnect, now. People don’t (always) realize where their food is coming from,” he said. “It’s our passion. It’s what we think is important, so we have to try.”

With the current decline in the national dairy industry, the economic machine of today’s agriculture industry in Franklin County is evolving yet again. It’s not the first time this has happened and it won’t be the last. During the second half of the 20th century, Claire Morenon, communications manager with South Deerfield-based Community Involved in Sustaining Agriculture (CISA), said the farming industry changed drastically because of federal policies and increased globalization, among other stressors.

As a result, Franklin County farmers bowed under “the loss of regional wholesale markets and increased price competition,” Morenon said. Those changes drove farmers to diversify into direct sales markets. They built farm stands, founded CSAs and forged other revenue streams such as corn mazes or by producing value-added products like jams, vegetable pasta and beverages.

“When CISA was founded 26 years ago, it was because farmers and advocates for farmers were looking for local solutions to the challenges that farmers were dealing with as a result of those changes,” Morenon said.

Decades on, area farmers are facing another challenge: legacy continuity, as an older generation gives way to a younger one. Acold cording to 2012 Census of Agriculture data compiled by the American Farmland Trust, 92 percent of New England’s 10,369 senior farmers (representing 35 percent of total farms) don’t have a manager under 45 working with them. These senior farmers own a collective $6.45 billion in agricultural assets and steward 1.15 million acres of farmland. Over the next few decades, a 2016 report by the American Farmland Trust noted that “30 percent of New England’s farmers are likely to exit farming.” The land and assets they hold will change hands one way or another. This transition has already forced some farmers to shutter their barns altogether, according to Jason Silverman of Conway, a Massachusetts agent for Land For Good, an advocacy organization.

But there are also success stories, like that at Sidehill Farm.

Klippenstein and Lacinski broke into the agricultural business as first-generation farmers nearly two decades ago. They founded the farm as a vegetable operation, leasing land from more than a dozen different landowners before buying land in 2012 and starting the yogurt business. The brand grew “much faster than we ever expected,” Klippenstein said, noting they rode the “buy local” initiative that was pushed by CISA in response to Franklin County’s changing agricultural economy.

“People were really excited about it and grabbed onto the idea of local dairy. We went through a couple of years of enormous growth,” Klippenstein said.

These days, Sidehill Farm Yogurt is a regional mainstay. It’s identifiable purple and green containers can be found in supermarkets throughout Western Massachusetts. Now at a precipice of that growth, Klippenstein said they want to shift their attention from managing the land to making more yogurt.

“About a year ago, we decided that working 100 hours a week and two full-time jobs is not what we want for the long -term. We (want) to stick to the yogurt making,” Klippenstein said.

To that end, they began searching for younger farmers looking to purchase land last September. They posted an advertisement on their website and connected earlier this summer with Gus and Kyra Tafel, who were searching for their next business endeavor after managing bovines on a number of farms in upstate New York. Most importantly, according to Klippenstein, they shared their vision of organic farming.

As part of a transition agreement, the Tafels began working on the farm in June as employees to “learn the systems” and to ensure a good match, Lacinski said. Their working relationship so far “is feeling like validation.”

Pinned to an office wall behind Lacinski was a map outlining their property. In a room next door, two Sidehill Farm Yogurt employees, Shahid Jalil and Chris Ryan, added maple syrup to a 900-gallon vat of plain yogurt. Outside, more than 100 grass-fed Normande and Jersey cows ranged as far as the eye could see, producing enough milk to make thousands of gallons of yogurt each week.

The Tafels intended to purchase the Hawley farm using a Food Safety and Drug Administration farming loan. While they were applying for it, however, Klippenstein said they ran into a problem because they didn’t have the 30 percent down-payment required to qualify. To circumvent the fiscal conundrum, Klippenstein said they connected with Dirt Capital Partners, a mission-driven investment firm and technical partner for farmers around land access, transition and conservation, according to Benneth Phelps of Sunderland, director of farmer services at the national firm.

The investment “allowed them to buy a $1 million-plus dairy farm,” Klippenstein said.

According to Phelps, “Gus and Kyra Tafel are skilled young farmers who had lost their milk market in N.Y., and we’re fortunate that due to the (Pioneer) Valley’s business and market opportunities, they have joined us here in the region,” she said. “When we sat down to discuss finding successors for the farm, Paul Lacinski and Amy Klippenstein had a vision grounded in reality about creating an opportunity for young farmers, and they were realistic about the timing and factors involved. Passing on the farm is an emotional step for all farmers.”

In this case, Phelps noted that Dirt Capital is providing transaction due diligence, facilitation and flexible financing for the Hawley farmers. It’s not the first time she’s helped facilitate such a transition.

“Retiring farmers face decisions about how to sell their farm or transfer their business. Viability plays a key role,” she said. To that end, “Dirt Capital (works) with farms approaching a family or non-family transition if there is a transition agreement in place; the business is viable and will still be viable after the transition.”

Moving forward and once the documents are signed, Kyra and Gus Tafel will run the day-to-day operations on the farm and will sell their milk to Lacinski and Klippenstein — continuing a symbiotic relationship that is the farm’s “financial engine,” Klippenstein said. Without it, Kyra Tafel said the business move might not have made sense.

“This is a really unique situation, here — the sale of Sidehill, the combination of the business and the farm and the two relying on each other,” she said. “It’s everything we were already doing, plus a contract for our milk, which was what we needed.”

In their decade or so of farming together in New York, first working on organic farms and then starting their own, Kyra Tafel, who grew up in a non-farming family in Connecticut and studied agriculture at the University of Massachusetts Amherst, said they’ve experienced just how fragile the dairy industry can be. Gus Tafel grew up on a dairy farm in upstate New York and studied carpentry before following in his parents’ footsteps.

“We started our farm with a goal of starting small … and gradually building up over time. We couldn’t just jump into buying a farm, especially with no guarantee of a market,” Kyra Tafel said.

Previously, Gus Tafel said they owned about 40 acres of land and ran a dairy operation through a three-year milk contract with a New York buyer, selling organic milk at a premium.

In contrast to the unstable business plan within which they operated in New York, which was reliant on selling product outside of the region, “Being that Sidehill is right here in the market, the milk goes right from the farm to the creamery and it is marketed to locals,” Kyra Tafel said. “This is a local farm, and you can go and see it if you want. … That’s what’s behind the product, and we think that’s great. It’s more secure than other businesses in the dairy industry. We didn’t have that when we started our first farm. It was uncertainty.”

While they differ somewhat in their approaches to farming, Klippenstein said they share the same farming values — a commitment to organic farming practices and to managing the land in a sustainable way.

“We each have something to bring to this. This really is going to be a partnership,” Klippenstein said. “Maybe the details will change, but the principles will stay the same, and that’s what’s important.”

Now that they don’t have to worry about birthing calves, haying or daily milking anymore, Lacinski said they’ll spend more time experimenting with new yogurt flavors (perhaps using locally produced fruit) and pushing into new markets. The transition, once it’s solidified, will ensure that Sidehill Farm and its symbiotic yogurt business continues its legacy for the foreseeable future — even if the dairy industry is in a state of decline right now.

“People will hold up their 3-year-and say ‘This baby is 80-percent Sidehill Farm Yogurt,” Lacinski joked. “That feels pretty good.”