meta Waikato farmers earn top titles at NZ Dairy Industry Awards :: The Bullvine - The Dairy Information You Want To Know When You Need It 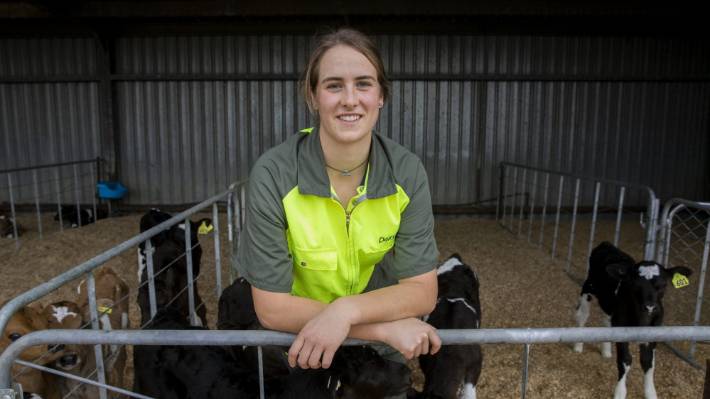 Judges expect Grace Gibberd to become a great ambassador and role model for New Zealand’s dairy industry. She is a farm assistant at DairyNZ’s 360-cow property in Hamilton.

Grace Gibberd has hardly had time to reflect on her major win at this year’s New Zealand Dairy Industry Awards.

The 21-year-old Hamilton woman was named New Zealand Dairy Trainee of the Year, beating nine other finalists from around the country, at this year’s Dairy Industry Awards announced on Saturday night.

On Sunday morning though, it was back to work as a farm assistant at DairyNZ’s 115ha research farm in Newstead, on the outskirts of Hamilton, where calving has begun.

“I watched the awards with some family and friends and was just really surprised to win. It’s all been done online this year so I haven’t had a chance to meet the other entrants,” Gibberd said.

Judges said Gibberd has a passion for animals and people. They expected her to become a “great ambassador and role model” for the industry in the years to come.

Gibberd studied agriculture at university before joining Dairy NZ in 2018. She now helps manage the Newstead farm’s benchmark herd, which is used to produce data for other farmers to use.

Winning the award would be an opportunity to “get my name out there” and look for future career options.

“I still have lots to learn here at DairyNZ, being a research farm it’s a bit different from a commercial dairy farm, but hopefully when I finish here I can go into a 2IC or manager role on another farm and progress from there.”

She said communication skills and practical experience had been the two major learning points during his time at DairyNZ.

“Communication skills is a big one because we have a large team and we need to communicate well with research technicians and scientists.

The awards were held via online and television broadcast on Saturday night, because of restrictions around Covid-19.

Waikato claimed two other top-three placings, including the Share Farmer of the Year and Farm Manager categories.

Farming for the future

Sharemilkers Aidan and Sarah Stevenson take a holistic approach to managing their dairy business, using the mission statement, “farming for the future”.

”It’s about farming for the next generation and encompassing all those things around best practice, farm sustainability and the environment,” Sarah said.

”It’s also about looking after our staff and helping to grow great people into the industry.”

It’s a vision which resonated with the judges and the couple, both 31, were named runners-up in the Share Farmer of the Year category.

Judges noted how much the couple cared for their team, how they used YouTube videos for training and had clear policies around contractor management.

The second-time award entrants say enduring the scrutiny of the judges helped propel their business in the right direction.

“The best thing is that you get people to evaluate your business, and get feedback, something which would normally cost tens of thousands of dollars to do,” Aidan said.

“It does look quite daunting but it has helped us understand our roles, look at every aspect of farming and to be better at what we do.”

It has also opened up other employment opportunities.

“We picked up another lease farm to run this year and that was a result of having that (awards finalist) on our CV,” Sarah said.

The couple have three children, Emily, 6; Jacob 4 and Jack 1 as well as two staff to look after.

An au pair is about to start work to free up Sarah to work on the farm this year.

Aidan entered the dairy industry in 2011 after enjoying a career as a builder.

He encouraged others to think about a career in dairy, especially with hundreds of jobs on offer at the moment.

”I grew up in a dairy community so knew a bit about it but people should give it a go, it’s a cool industry to be a part of and plenty of career paths if you’re prepared to work hard.”

Dairy her career for life

Winning third place in the Farm Manager category was a good way for Daisy Higgs to finish off her time at Gavin and Maree Haddon’s 91ha, 300-cow farm in Morrinsville.

Higgs started work there 3.5 years ago, straight out of university with no experience, but she is adamant dairy farming is now her career of choice for life.

“I didn’t come from a farming family but the sharemilker in Morrinsville, Aaron Price, took me on and I learnt pretty much everything from him, around pasture management to cow health.

“It’s all very well to learn the theory but it doesn’t really connect until you get out there and put it into practice.”

The judges described Higgs as an extremely engaging, driven and analytical person with excellent attention-to-detail and the ability to communicate to, and to reach, a wide audience.

Higgs, 24, left the Morrinsville property at the end of the 2019-20 season and on June 1 she started a new job as farm manager at a property in Roto-o-rangi, near Cambridge.

“It’s about 91ha and 180 cows so smaller than the farm I worked on in Morrinsville.

“But it’s just me and the farm owners and I’ll have a lot more responsibility, making all of the day-to-day decisions.”

Higgs and her family moved from England to New Zealand in 2004. They lived in Taranaki and Higgs went to university in Palmerston North before moving to the Waikato.

She also hopes more young Kiwis will look at the dairy industry as a career option, just like she did.

“Farmers love people who are willing to learn and give everything a go.

“It’s easy career progression and that’s important for people to see. You can go from farm assistant to farm manager, to contract milker and then share milker.”