meta TD Canadian 4-H Dairy Classic Returns in 2022 :: The Bullvine - The Dairy Information You Want To Know When You Need It 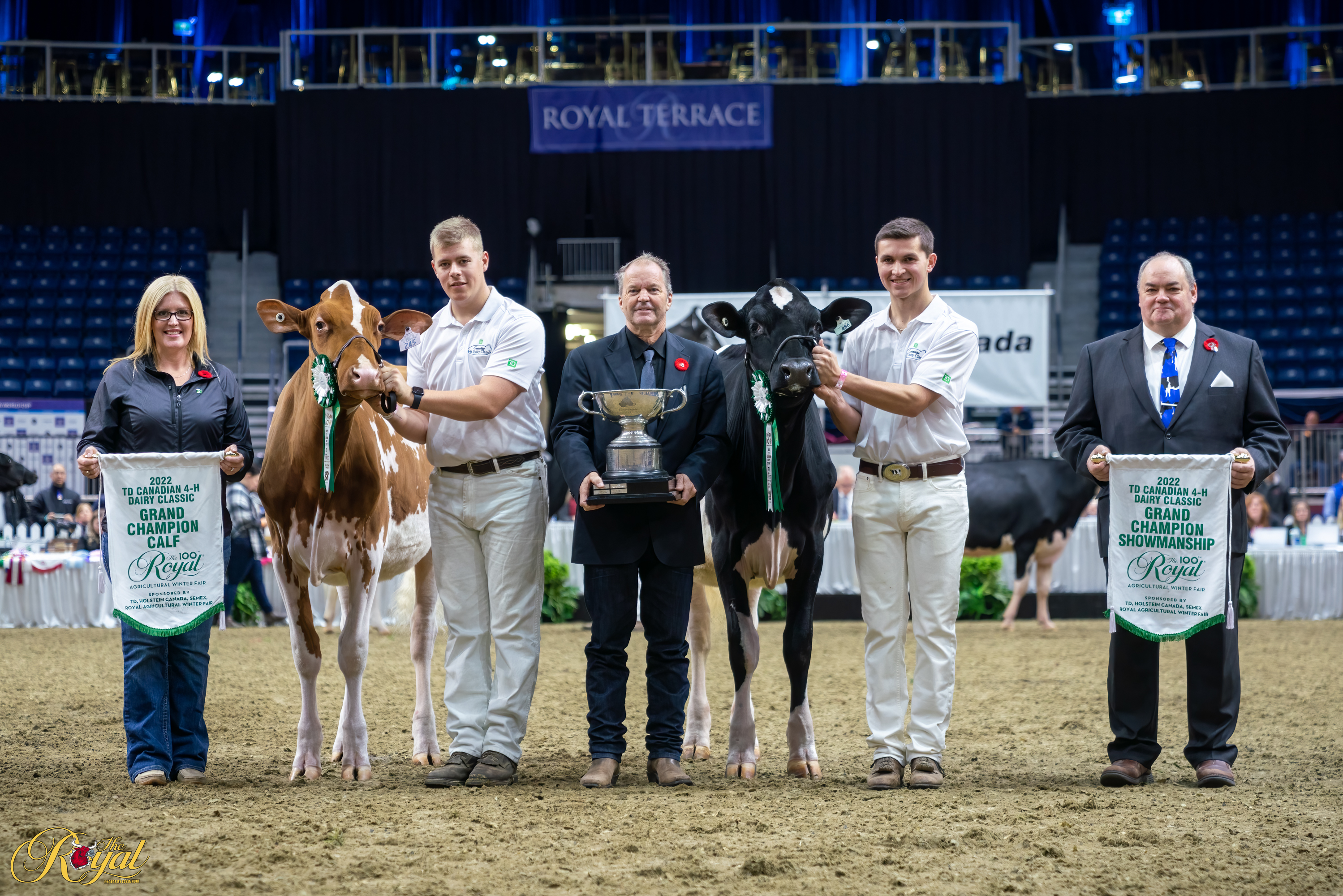 On November 7-8, 2022, following a two-year hiatus due to the COVID-19 pandemic, the TD Canadian 4-H Dairy Classic returned to the Royal Agricultural Winter Fair. During the 100th anniversary of the Royal Agricultural Winter Fair, competitors from five provinces came to compete and put all on the line when displaying their animals. The event was attended by 313 4-H members from Ontario, Quebec, Prince Edward Island, New Brunswick, and Nova Scotia. Early Sunday morning, teams began moving in to put up their exhibits and settle in their calves. During the famous competition, 4-H members competed individually in showmanship and confirmation and as teams for Best Exhibit, Best Group of Three Calves, and Champion County.

On November 7, representatives from each of the 49 competing teams, carrying signs bearing their team’s name and led by three Toronto Mounted Police on horseback, launched the performance. Maryn Hunter from Leeds County sang “O Canada,” and Troy Packett, Associate Vice President of Agricultural Services at TD Bank, began the performance. On Monday, Dominic Fortier of St-Christophe d’Arthabaska, Quebec and Kyle Rivington of Carp, Ontario were tasked with judging 4-H members’ showmanship talents in the Semex Ring of Excellence. Throughout the high-caliber competition, Fortier determined champions from each distinct group by selecting the best Junior, Intermediate, and Senior showpeople from multiple heats.

Winners in each group were as follows:

Monday night after 8 p.m., Tyler Canning was named Grand Champion Showperson, which was the main event in Showmanship. Keaton Phoenix was Honorable Mention and Ty Finley was Reserve. Holstein Canada Vice President Doug Peart gave Canning the President’s Cup on Monday evening. The President’s Cup is given to the Showmanship Champion every year.

On November 8, Emily Leblanc sang “O Canada” to start the show. Russell Gammon and Phyllis MacMaster were in charge of letting people know about the show, and then the conformation classes started. Conformation Judge Chad Ryan from Fond du Lac, Wisconsin, put the best 4-H Holsteins, Jerseys, Ayrshires, and other coloured breeds from all over the country in their heats and classes. He chose Nolan Allardyce of Brant County’s Fall Heifer, MS-Aol Realist-RED-ET, which won first place, as the Grand Champion Calf. Reserve went to Keaton Phoenix of Durham West, who showed the first-place Spring Yearling, Kentville Chief Bodacious. Honorable Mention was given to Bosdale Lambda Lusteria, the Summer Yearling that won first place and was shown by Rhett Terpstra of Perth County.

Here is where you can find all of the show’s results: https://www.assistexpo.ca/results/rawf/20/1

At the TD Canadian 4-H Dairy Classic, one of the most coveted titles is “Best Exhibit.” On Monday and Tuesday, the exhibits were judged on how clean they were, how well they interacted with the public, how well they had signs, and how well they were displayed overall. Several teams brought back old Classics by getting creative with old photos and memorabilia. This award went to Middlesex County, which also won it at the last show held in 2019. Jensen Halters has been a generous sponsor of this award every year since the show began. They gave each team member a trophy and money. This year’s Best Group of Three was shown by members of a team from Brant. Durham West from Premier County won the “Bill Edelstein Bowl.” They got the most points as a county for Showmanship, Conformation, and Best Exhibit. Eden Vis of Wentworth was the lucky person who got to take home the Classic showbox, which was made by Chairman Murray Reissner.

Fraeland Holsteins of Fergus, Ontario, was this year’s “Breeder of Distinction.” Steve Fraser and his father, Jack Fraser, were there to greet people and give away five Stanton Alligator embryos from Fraeland Emilio Blizzard EX-90, a fourth-generation Excellent from their world-famous Bonnie family. Taylor Vandermeulen from Northumberland County won the embryos this year.

During this year’s show, two awards were given out. On Tuesday morning, the Justin Parish Memorial Bursary was given out by the Parish family. Justin’s dream was to make it to the Royal, and this award, which is given to a first-time competitor at the Classic every year, keeps his dream alive. Rhett Terpstra from Perth County won this year. On Tuesday afternoon, the Bertram and Hazel Stewart 4-H Dairy Youth Education Award and Bursary was given out by the Stewart family and 4-H Ontario. This award and conditional bursary of $1,000 is given to a 4-H Ontario Dairy Club member who meets the requirements every year to help pay for their post-secondary education. Addison Dwyre of Frontenac was a worthy winner this year.

During this year’s Classic, there were a number of important people there. This year, Mary Poirier was the Guest of Honor. Since the mid-1990s, she has been an important part of the Classic committee, and her influence on the show is hard to measure. Troy Packett from TD Bank, Paul Larmer from Semex, and Doug Peart and Sylvie Mahannah from Holstein Canada were among the other well-known guests. The President of the Royal Winter Fair, Ms. Shelley Peterson, was also there to say hello and wish the competitors well. Rene VanAkker, Dean of OAC at the University of Guelph, was there to meet everyone and talk about how interested people are again in the university’s Agricultural programmes. The Hon. Lisa Thompson, the Provincial Minister of Agriculture and Rural Affairs, came to give an encouraging speech and praise 4-H and other youth programmes. At the end of the show, Clarissa McCallum of Frontenac and Savannah Crack of Quebec South East spoke on behalf of all 4-H members to thank sponsors, parents, chaperones, and the Classic committee. At the end of the show, Cassie MacIntosh from Glengarry County sang “O Canada.”

The Classic would not be possible without the generous donations from our major sponsors, TD Bank, Semex, and Holstein Canada, which show their commitment to youth. Thank you also to the many sponsors who helped make this happen. The people who helped set up the event and the 4-H members who came are very thankful. Without the help of local sponsors, parents, leaders, and other volunteers, many 4-H members would not be able to go to the TD Canadian 4-H Dairy Classic. They should also be thanked very much. The 41st TD Canadian 4-H Dairy Classic, which took place at the Royal’s 100th Anniversary Show, was a huge success, and we look forward to many more Classics in the future.

Thank you to everyone who helped with the Classic this year!