meta 500 cows killed in B.C. floodwaters, says dairy association :: The Bullvine - The Dairy Information You Want To Know When You Need It 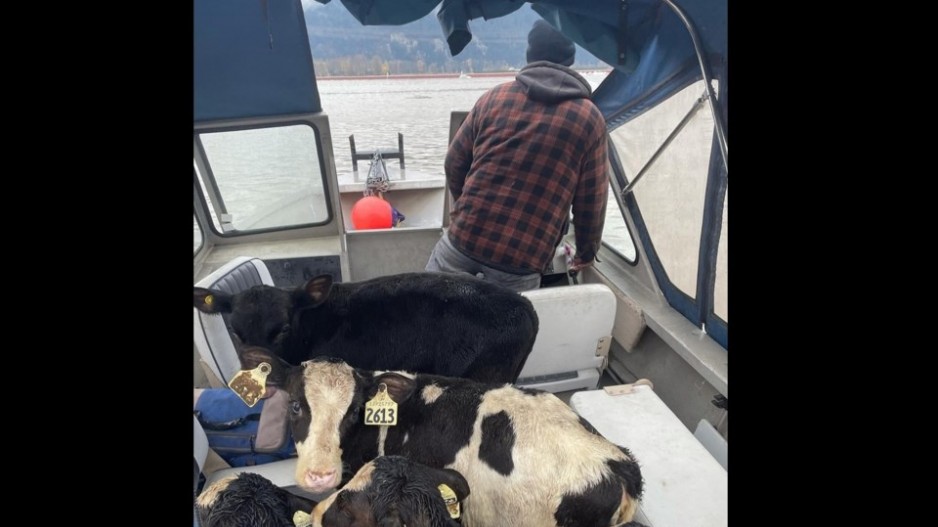 At least 500 cows were killed by floodwaters across southern B.C. last week after a powerful atmospheric river dumped record rainfall across much of the Fraser Valley, says the BC Dairy Association.

Of an estimated 23,000 cattle scattered across the Abbotsford, Chilliwack and Agassiz region, about 6,000 have been evacuated while another 16,000 remain on their farms.

“It is possible the number of deceased cattle may rise should more flooding occur or more animals need to be euthanized due to health problems caused by the flooding,” said the association in a statement Tuesday.

Over the past week, 62 farms across the Yarrow and Abbotsford region were under evacuation order.

Among them was Abbotsford dairy farmer Karl Meier, who says his 240 cows all made it through the floods alive after water rose up to their bellies.

His family was woken in the night last week when floodwaters floated firewood and a 100-year-old snooker table in the basement, knocking them against the walls.

The following days were spent in an endless cycle of evacuation and return, as the family checked in on the animals.

“They were just not feeling great. They were in standing water, in survival mode,” he says. “Now, they’re doing well. We put in fresh bedding. Animal health is up. They look good.”

Cleaning up the farm has been a monumental task. Meier was forced to throw out several bales of wet feed to avoid sickening the animals.

The BC Dairy Association says it’s working with the province and transport companies to make sure cattle are housed, fed and watered. “Significant amounts of grain and supplies” have been brought in to help farms hit by floods, says the association.

Last week, the association told farmers to dump their milk after floods cut off access to farms. On Tuesday, BC Dairy said 80 per cent of the milk produced in B.C. is being picked up for processing, enough to supply the province.

In B.C.’s Interior, milk is temporarily being trucked to Alberta for processing until reliable transportation can be restored to the Lower Mainland; in the eastern Fraser Valley, milk is being sent along Highway 7, a four- to five-hour detour.

While dairy is getting through, the transportation disruptions mean not all milk in the Fraser Valley is making it to market. That’s not likely to improve until a flooded section of the Trans-Canada Highway through Abbotsford reopens.

Sumas Prairie farms adjacent to the flooded stretch of highway — including the Meier farm — make up 14 per cent of the province’s milk volume.

The slow recovery effort has been made easier by a steady stream of volunteers, says Meier.

“Every day, at least twice a day, I get calls offering help,” says the farmer.

Meier says his friend Russ has been an “iron horse” over the last week, coming every day to help out. Surrey-based technology firm Western Robotics stopped by to help power wash the farm, a neighbour has offered to clean up plastic flotsam strewn across the property and Meier’s hoof trimmer came last week to wash all the barn clothes.

Some of the biggest help, says Meier, has come from the Abbotsford Rugby Club — they cleaned out the soggy firewood from Meier’s basement, gutted the insulation, drywall and subflooring, and shovelled out the entire barn.

Today, the club is helping a neighbouring farm.

“We’re busy. Someone wants to come and lend, we’ve got shovels. Come on down,” he says.

The only thing that worries Meier is the coming storm Environment Canada predicts could dump as much as 80 millimetres of rainfall across the region.