meta Dairy pride is making a big comeback in New Zealand :: The Bullvine - The Dairy Information You Want To Know When You Need It

Dairy pride is making a big comeback in New Zealand 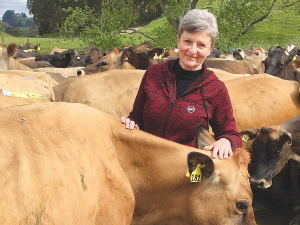 “We are starting to stand shoulder to shoulder and be a voice,” she told Dairy News.

“On a personal basis in my time in this role as chair I would like to see that pride grows to a place where dairy farmers are not afraid to say ‘I am a food producer. I feed the world and I am proud of it’.

“Adversity sometimes makes people come together and speak with a collective voice.

“I would like to see the agricultural sector do that because we are all food producers.  The world needs us, New Zealand needs us.”

Sometimes it is hard to tell our story because of the humble nature of New Zealanders, she says. That was evidenced in the way the All Blacks after their loss to England came out the next week to play with heart and passion, and to salute the crowd, in contrast to the behaviour of some other teams.

“New Zealanders are intrinsically wired to be quite humble but we need to step over that and realise we do have something worth celebrating in this country. It is worth being proud of every aspect of it and that includes the agri sector.

“All of New Zealand should be proud of the agri sector. We are one of the cleanest food producing countries in the world.”

Challenges around water and greenhouse gases need to be faced “but we can get there,” she says. “We can only get there by working together and taking time, not throwing one generation under the bus.”

Former chair Cathy Brown, living the empowerment values of DWN, stepped down from the role to allow Forlong the same opportunity to grow. Forlong says she has “some very big shoes to step into” but sees the role as similar to an orchestra conductor.

“I don’t really play an instrument. There are many components of DWN and my role is bringing all the great aspects of it together.”

The industry is in a state of great change and there is a lot of noise out there, she says.

A key DWN focus is acting as a supporter and enabler through this change. Delivering knowledge, sorting the noise and facts from each other and trying to soften the noise a little to members are important.

“We put a strong value on face to face connection where possible.  We have this wonderful group of regional leaders who work voluntarily and tirelessly alongside busy day jobs to bring events together at regional level for members and others to come together face to face. Regardless of the purpose there is nothing quite like being in the same room as other human beings.”

Nimbleness is a DWN strength particularly when there is a real need. The network has responded to issues in the past 12 months — like M. bovis, new labour and housing regulations — with workshops quickly put together for members.

“We got rid of the noise and put the facts to them in a face-to-face situation where they could share their successes and their challenges.”

Aside from expert facilitators they “had that wonderful thing called ‘gold’ in the room, with people on the ground who are actually living the real deal”.

“We can have all the great ideas written on paper but implementation is key.” Workshops aim to provide proven solutions that can be implemented immediately.

Forlong says one of her key strengths is she is an inclusive person.

“A priority at times like this is to be inclusive, to allow people a place to land in a safe and trusted place where they can ask the questions, share their challenges. We as a network are there to stand tall with them and walk through this whatever that might be.

“We are getting better and better at that, we are playing very strongly in the people space, delivering in that aspect, and also supporting the Dairying Tomorrow strategy.”

A key strength of DWN is that it is “pick and mix,” she says. Members can be involved as much or as little as time or inclination allows and in whichever aspect suits. That may include the annual conference, workshops, more structured involvement like business groups and social aspects to get off farm.

Karen Forlong has farmed with her husband Maurice on just over 200ha near Atiamuri in the Central Plateau for 25 years.

They milk 400 Jerseys which is not quite the norm on the Central Plateau where Friesian cross-breds predominate.

Prior to farm ownership, the Forlongs were sharemilking around Waikato, including a contract milking job for Tatua supply which included a Jersey herd.

They were offered the opportunity to buy the herd and go 50/50 share milking as a first step towards farm ownership and they have stuck with Jersey since.

Forlong says she could “talk the merits of Jersey until the cows come home”.

They produce about 100-105% of their liveweight in milk solids, they are very efficient and their lighter frame of 400-420kg does a great job of protecting the steeper contour of the property.

Forlong has been a member of DWN since 2000 when the first regional group for the Rotorua area was formed.

She has experienced various roles that included being a volunteer regional leader.