meta Dairy farmers don’t see hemp as their new cash cow :: The Bullvine - The Dairy Information You Want To Know When You Need It 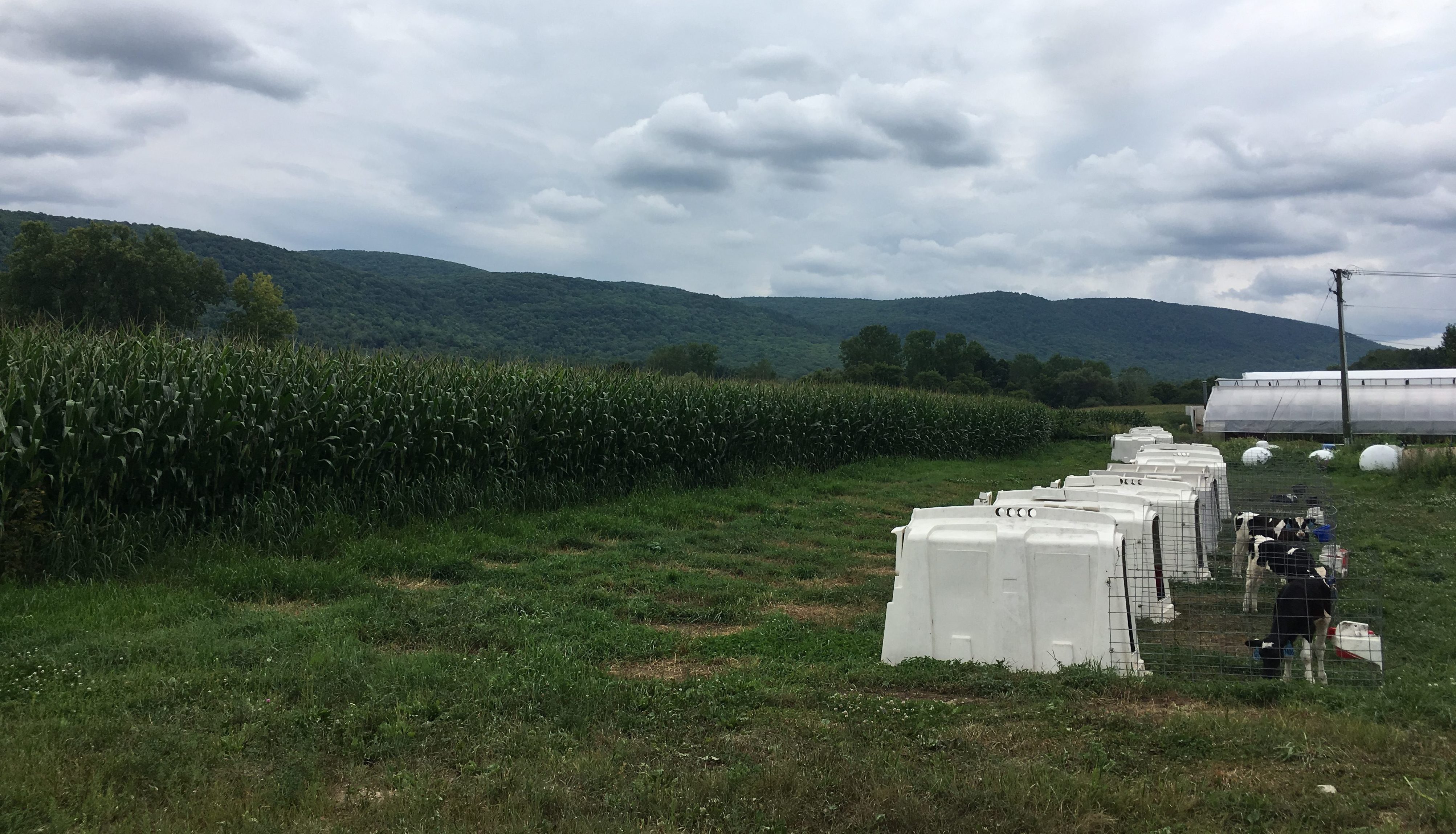 The rolling cornfields and sounds of cows chewing their cud at Freund Farm in East Canaan couldn’t be further removed in spirit from the paneled walls and political conversation at Connecticut’s Legislative Office Building in Hartford— but for dairy farmer Amanda Freund, the change of scenery was necessary.

Last week, Freund, a third-generation dairy farmer, along with five other legacy dairy farmers, made the drive to Hartford to meet with members of the state legislature’s Rural Caucus to discuss the ailing industry that has long been troubled by economic instability.

“It does not bring me pleasure to go to the State Capitol and to ask for a subsidy for us to be able to keep our business afloat,” Freund said. “It’s not how we want to run this business. We want to be able to at least cover our costs, but when the federal system doesn’t allow us to do that, we’re really looking for the state to recognize that.”

Connecticut’s dairy farmers say they have reached the limits of innovation, and attempts to diversify and employ new technology on their farms haven’t been enough to stave off the crippling effects of trade-war tariffs, low milk prices, high operating costs and dwindling state subsidies.

While some prominent lawmakers and some farmers see hemp as the next great hope, many of the state’s dairy farmers are saying that the odds of hemp becoming their cash cow are slim.

Since the state’s pilot program began in June, the Department of Agriculture has issued 71 licenses for prospective hemp growers —giving them the opportunity to tap into the still-fledgling industry that was estimated at $800 million last year.

“We could probably make more money with hemp, but we are here for a greater cause. We believe feeding people is more important.”

“Until hemp is an established industry, we’re not going to know what the funding stream is going to be. So, it’s not something that will help a five-year downturn that is happening right now,” said State Sen. Cathy Osten, D- Sprague, a member of the Rural Caucus. “I believe that hemp will help out many in the farming community. I’m not certain that it can help dairy right now.”

Many of the state’s dairy farmers share Osten’s concerns. Freund said the logistics alone eliminate hemp as a viable solution for dairy farmers.

“With respect to [hemp] being a guiding light for the dairy farms in the state, I would say it’s not likely that it is going to keep us afloat,” Freund said. “It requires resources beyond what we have, and we need to stay focused on growing the crops to feed our cows before we can consider growing additional crops.”

Seth Bahler, co-owner of Oakridge Dairy Farm in Ellington, said the dairy industry is not going to be saved by the hemp industry, and he’s not going to grow it.

“Hemp just doesn’t fit with our strategy or our values,” Bahler said. “We don’t live off of CBD oil. We need more food grown locally. We could probably make more money with hemp, but we are here for a greater cause. We believe feeding people is more important.” CBD oil, or cannabidiol, is a non-psychoactive strain of cannabis highly valued as a treatment for a number of health issues, especially seizure disorders.

Jim Smith, a fifth-generation farmer from Franklin, said that even if the infrastructure to manufacture CBD were in place, growing hemp is labor-intensive, and expensive at $1 a seed or $4 a plant.

“I plant 1,750 acres of corn. To convert that to hemp, that would mean I’d probably have to employ like 3,000 people to keep it cultivated,” Smith said. His farm currently employs 18 full time and four part-time people.

“I really don’t think anybody did that full budget on it. I think they saw it as an opportunity and on a small-scale, there probably is an opportunity there, but it’s nothing that we can turn on overnight,” Smith said.

As the dairy industry enters its fifth year of decline, dairy farmers like Freund and her family, have found ways to create value wherever they can. The Freunds launched Cow Pots in 2007. The biodegradable planters are made out of the farm’s second most valuable commodity: manure.

Both Freund and Smith, like many dairy farmers, have joined or started collectives made up of other local farmers to diversify their revenue. Freund is a member of the Cabot Creamery Farmer Co-op and Smith and five other families started The Farmer’s Cow— an agriculture advocacy group that also sells a popular line of dairy and food products.

In addition, many of the state’s dairy farmers have installed milking robots, solar panels, and cutting-edge systems that repurpose the methane extracted from their cow’s waste.

“Even when we invest in the best technology, and we optimize as many efficiency things as we can, we’re still left in a position where we’re asking the state to keep us keep us around,” Freund said.

The state’s dairy farmers have been bedeviled by years of low milk prices. Dairy prices were expected to rise last year, before the Trump administration imposed new tariffs on aluminum and steel from Mexico, China, and Canada, provoking those nations to retaliate with tariffs on U.S. goods.

Freund, whose family oversees about 500 acres of land and milks 300 cows, said most dairy farmers have invested thousands if not millions into their farms so that they can be competitive in a global market. Even though most of the state’s dairy farmers sell their product locally, the U.S. dairy industry as a whole shipped about 17 percent of its product overseas between 2015 and 2016, according to Freund. Mexico and China were the biggest importers of U.S. cheese and whey, respectively. But with exports down, a surplus of milk and other dairy products have flooded the U.S. market, driving prices down.

In 2018, the federal government rolled out a program to mitigate the market disruption caused by the trade war. The disruption was estimated to be in the millions and Connecticut farmers received $370,560, according to the Connecticut Farm Bureau.

“Not being able to export these dairy products that we had built a market for is proving to be very consequential for us and affects our bottom line,” Freund said.

Osten said the Agricultural Sustainability Account (Community Investment Act Dairy Fund), which was created to subsidize the state’s farmers during times of economic downturn, remained intact for the last two years despite historically being raided to bolster the general fund. Osten said the raids cut the payments to farmers by more than half.

Osten said although an additional $1.4 million has been secured in this year’s budget, it is not enough to sustain the dairy industry.

“In order for us to sustain dairy throughout this downturn, we’re going to have to set money aside to save 25 percent of a $4 billion-dollar agricultural industry,” she said. “We have plans to introduce legislation next year, but we have a problem between now and next year that we need to deal with.”

State Agriculture Commissioner Bryan Hurlburt said the state’s 99 remaining dairy farms still punch well above their weight economically, but there is more that the state could be doing to invest in its farmers.

“Many states looked to Connecticut,” Hurlburt said. “The Agricultural Sustainability account was the model for a number of years. Maine has just put in $14 million as a general fund allocation to support their dairy farmers. I think one of the most important things is that we continue to have these conversations… and look at what other states are doing.”

According to Hurlburt, Massachusetts will implement a study in the next year to quantify the environmental benefits of its dairy industry, and he said Connecticut may be able to do the same.

Eighty percent of the available farmland in the state is leased by dairy farmers. The land is not only a base for local food production, but contributes to open space and wildlife habitats.

Freund said she hopes both residents and lawmakers realize how integral dairy farms are to the state’s culture and well-being.

“If you really do care about the quality of your food and the effect that it has on the environment, then you should be demanding that we have farms here and that we have a local food system and that we’re protecting it,” Freund said.

James “Cricket” Jacquier, a third-generation farmer from Canaan, said he wants to continue to grow his business for the next generation.

“We didn’t get in this business to get rich or build our 401ks. We got into this business because we are passionate about farming and we know the work is important.”

Maya Moore Maya Moore is CT Mirror’s 2019 Emma Bowen Foundation Intern. She is a journalism and political science student at the University of Connecticut and has an interest in topics covering race and social justice. Moore began her undergraduate journalism career as a campus correspondent with UConn’s independent student-led paper, the Daily Campus, and has since interned for the Hartford Courant. Her work has also been published in the Willimantic Chronicle and the university’s premier publication, UConn Today. Moore is a New Britain native and currently resides in Mansfield, where she continues to write for UConn’s communications department.