meta Washington dairy fire has silver lining :: The Bullvine - The Dairy Information You Want To Know When You Need It 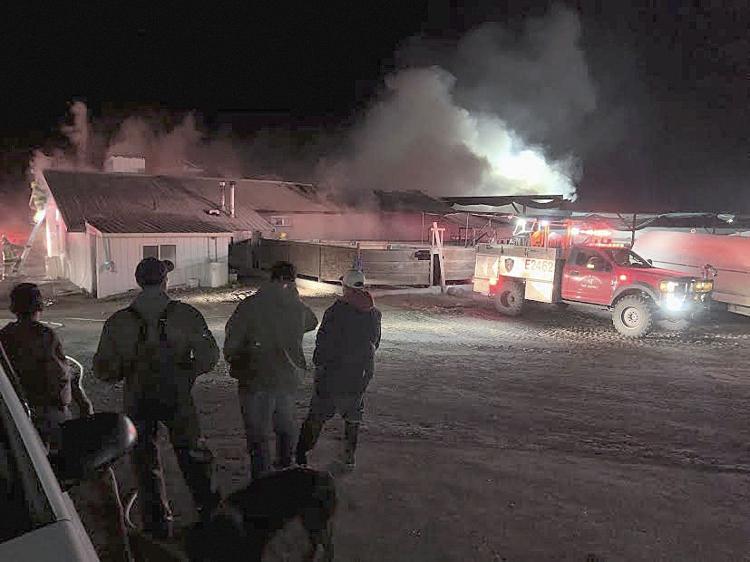 The owners of a dairy lost their milking parlor in a fire but are grateful for their good fortune in finding a vacant dairy 60 miles away.

They’re amazed that dozens of people helped them move 900 cows to that dairy, where they were milked within 24 hours, missing just one 12-hour cycle.

“I’m very humbled and grateful,” said Kevin DeGroot, 47, who operates the dairy with his father, Louie, 69. They are fourth- and third-generation dairymen, respectively.

DeGroot Dairy is seven miles south of Othello. Employees were milking cows when they noticed smoke shortly before 10 p.m. Sunday, April 14, and got the cows outside, Kevin DeGroot said.

“I was called within 10 minutes of the discovery. I live an eighth of a mile down the road. I got there and fire had spread to the attic,” he said.

Firefighters from several districts fought the fire for a couple of hours. They did an “excellent job” but equipment and 1,000 gallons of milk were lost and the future of the approximate 30-by-80-foot structure is very questionable, DeGroot said. He estimates the cost of replacing the structure and equipment at $200,000 to $500,000.

Fire officials said the cause is under investigation.

At 11 p.m., with the fire still burning, DeGroot was thinking of where to milk his cows for the sake of their health. They are normally milked in groups of 150 every 12 hours.

DeGroot called Joe Youngren, in Quincy, whom he knew had quit the dairy business four to five months earlier.

“His dairy was sitting empty but I didn’t know if he had sold off his equipment. He hadn’t,” DeGroot said. “He went out and worked all night to get it ready for my cows in the morning.”

“The whole community, not just dairymen, but ranchers and even hay farmers came to help. We had a convoy of 16 to 18 trucks going up Dodson Road, north to Quincy,” he said. “I would say probably 60 people were helping. It was unreal. Some came from at least an hour away.

“What’s funny is I have a neighbor I see only a couple of times a year and he was right there to help. Some ladies brought pizza and things for lunch and kept everyone fed. Moving took almost all day.

“As soon as they came off the trucks we were able to bring them in and milk them.”

DeGroot said Youngren made it a smooth transition and “his sons, Rodney and Jordan, who have other jobs, helped because they have dairy blood in them.”

DeGroot hopes to impose on the Youngrens for only a couple of months until he gets his milking parlor rebuilt. Meanwhile, he and his 10 employees will be split between milking duties at Youngren’s and feeding 1,600 replacement heifers and dry cows at his place.

“Given our situation,” he said. “It turned out very well.”