meta Not your grandparents’ dairy: Washington operation shows scale of modern milk production :: The Bullvine - The Dairy Information You Want To Know When You Need It

Case VanderMeulen’s oldest brother inherited his family’s 100-cow dairy in the Netherlands. So the younger brother came to America and built his own milking enterprise that never sleeps.

He has 68 full-time employees who milk his 6,800 Holstein cows three times a day in two huge milking parlors. The farm also grows some of its feed and operates its own water processing plant on the sprawling 3,300-acre Coulee Flats Dairy he purchased a decade ago outside of Mesa, Washington.

Built on an existing crop farm and expanded over time, Coulee Flats operates 24 hours a day, every day, and now grosses between $30 million and $50 million a year.

“I’ve got milk running through my veins,” VanderMeulen said. “I grew up in a dairy. It fascinated me.”

VanderMeulen’s fascination has led to a complex, science-based operation that takes byproducts left over from a variety of crops and mixes them with other feeds so that every cow has all the nutrition it needs to produce about 10 gallons of milk a day.

The milk from Mesa is trucked to 11 processing plants, including one in Spokane operated by Darigold, the marketing arm of the Northwest Dairy Association.

That co-operative of about 465 dairy producers in Washington, Oregon, Idaho and Montana then processes the raw milk into everything from jugs of 2 percent for the morning corn flakes to cheese, butter and powdered milk that is exported to 20 countries, including Morocco, Egypt, Japan and China. 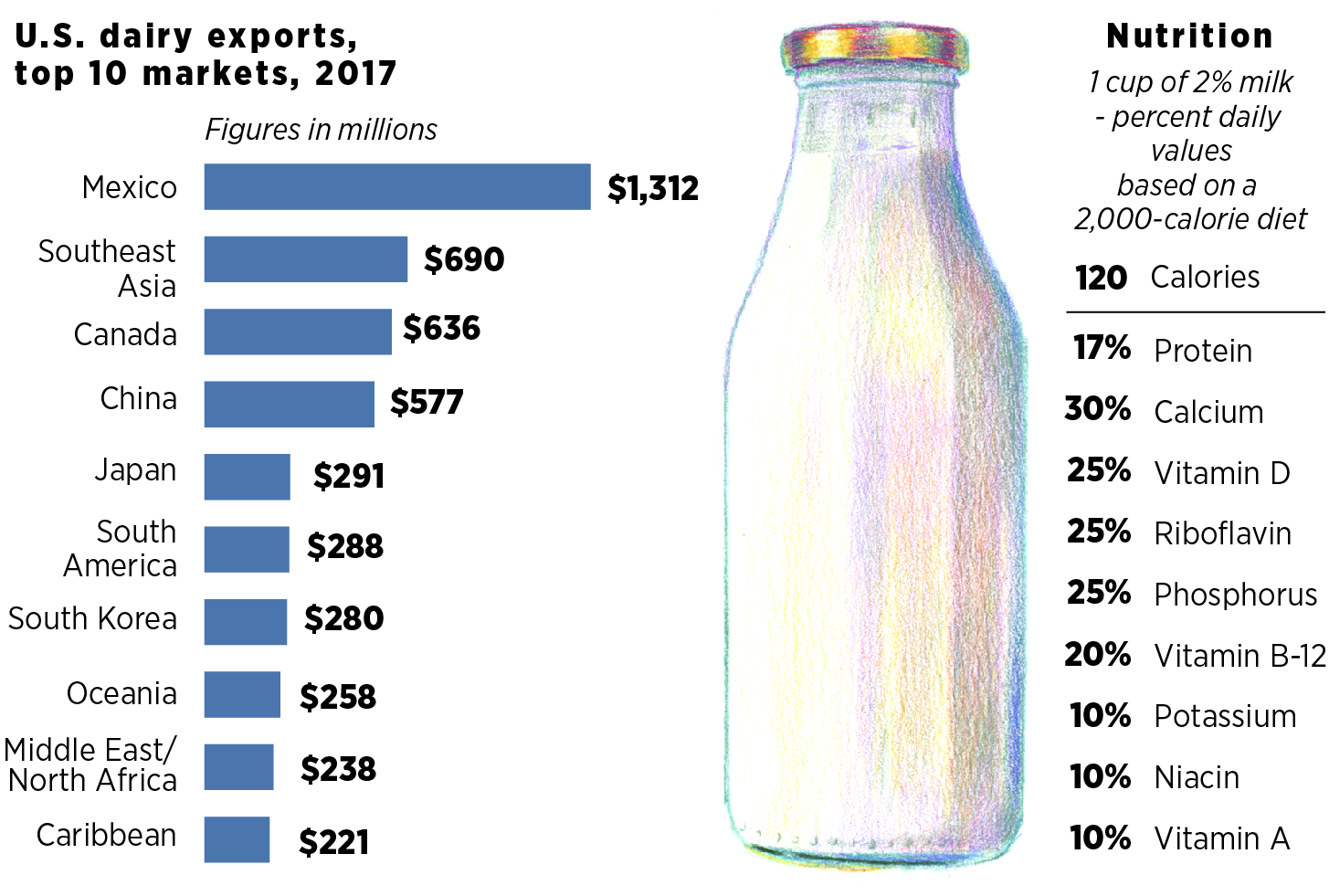 Steve Matzen, the senior vice president of the Northwest Dairy Association, said the farmer members of the organization has declined from about 1,600 in the 1980s to about 465 members today. It’s a business that evolved from the early 1900s, when farmers still milked cows by hand.

While the number of co-operative members has dropped, production has more than quadrupled through advances in automated milkers and advances in nutrition. It’s the story of conventional agriculture as large and successful farms, orchards, dairies and ranchers get bigger to supply a consistent demand for food from a growing global population.

The dairies in the regional cooperative produce about 2.3 million gallons of milk a day. All that milk is trucked by a third-party contractor to the Darigold plants, which produce about 35,000 pounds of butter every hour and 195 million pounds of cheese a year.

About 25 percent of the milk stays in liquid form and the rest gets processed into cheese, butter, yogurt and powdered milk. Of those finished products, some 40 percent are exported to other countries and 60 percent are sold to consumers in the U.S., Matzen said. 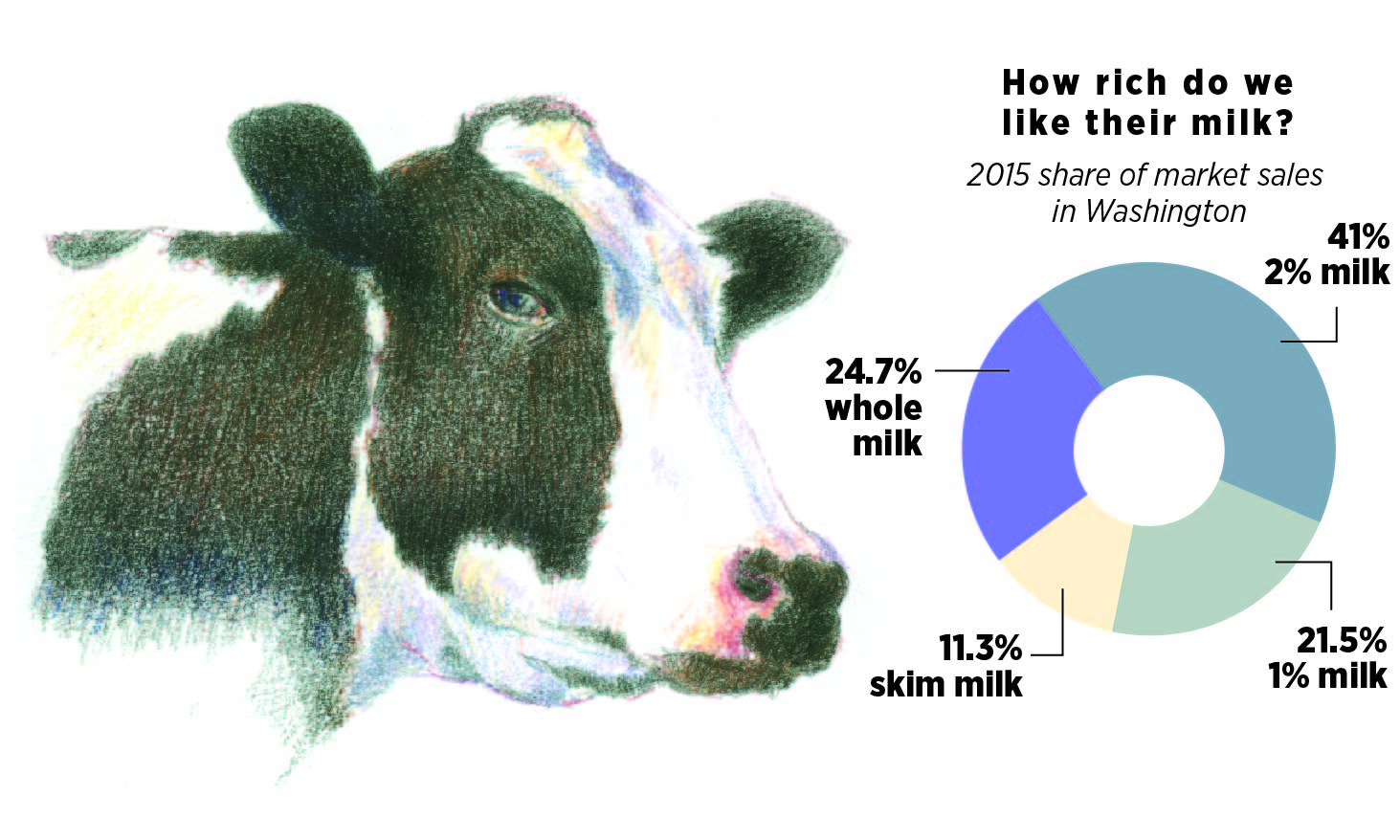 As a result, fluctuations in the markets anywhere in the world likely will affect the price that VanderMeulen gets paid per pound for his milk in Mesa.

“This gets back to the complexity of milk pricing,” Matzen said. “The things that impact milk prices are not so much what happens in Seattle or Spokane. It’s what happens around the world.”

For example, prices fluctuated in 2017 after farmers, including VanderMeulen’s older brother, in the 28 countries that make up the European Union started producing more milk.

“Then we saw a global imbalance,” Matzen said. “So, we had downward pressure on prices.”

During those times, consumers pay less for milk and producers, like Case VanderMeulen, get less money per pound, even though the cost of feed, fuel and employees may continue to rise.

“It’s something that people really don’t understand,” Matzen said. “It’s pretty impressive how hard (producers) work and what they get done. In our society today, there is such a disconnect between food production and what it takes to produce food. The appreciation just isn’t there like it was 50 years ago.”

Those international influences are why farmers get nervous when officials from China and the United States begin threatening a trade war, he said. 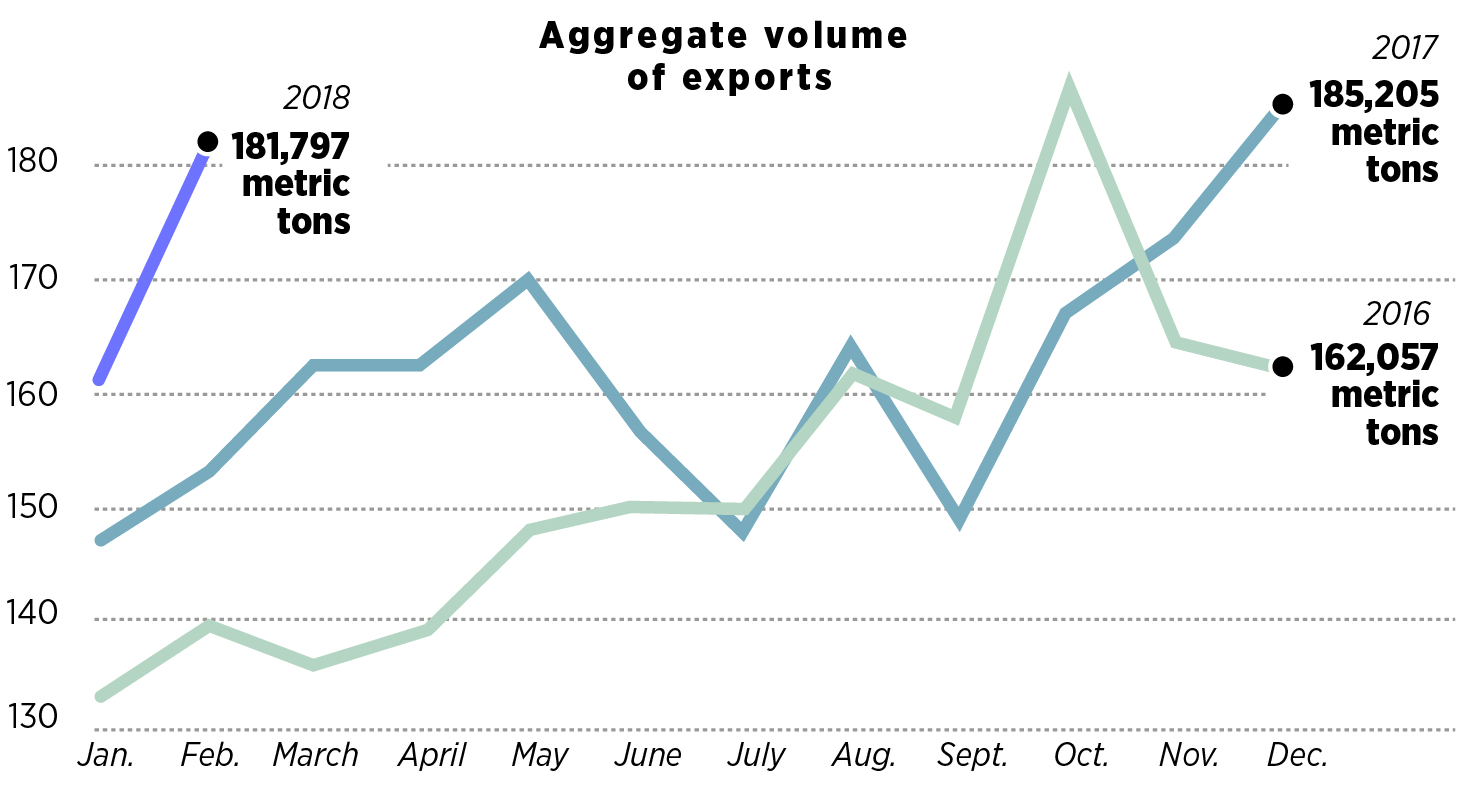 “It could have a negative impact on our farmers,” Matzen said. “If all of the sudden we didn’t have access to international markets, you could imagine the supply-demand imbalance.”

That gets back to the reason why all the producers joined to form the co-operative, which has a staff of 1,600 people who produce, market and promote the dairy products.

“Every one of those 465 farmers are owners of the co-op,” Matzen said. “Our core purpose is to provide a secure market for our member-owners. We’ll be there to pick up the milk and maximize the value.”

VanderMeulen, 52, came to the United States in 1989 and worked in California after it was clear he wasn’t going to get the family dairy in Holland.

In 1991, he moved to Washington and started with a small dairy in Grandview.

He later operated two dairies in Sunnyside before looking for a new home that didn’t have a growing population, as close-set dairies can cause conflict between new neighbors, and cows in confined spaces can generate a powerful odor.

VanderMeulen began looking to relocate to a place that offered a good labor market, quality roads for transporting his product and access to lots of feed. He found the land that would become Coulee Flats in 2007.

As a result, he was able to design the dairy to maximize efficiency in both production and to meet strict regulations that prohibit waste from leaving the site. The dairy is just off U.S. Highway 395, west of the small town of Mesa, and the prevailing wind pushes the smell away from homeowners. It is one of about 480 dairy farms in Washington that collectively milk more than 200,000 cows. 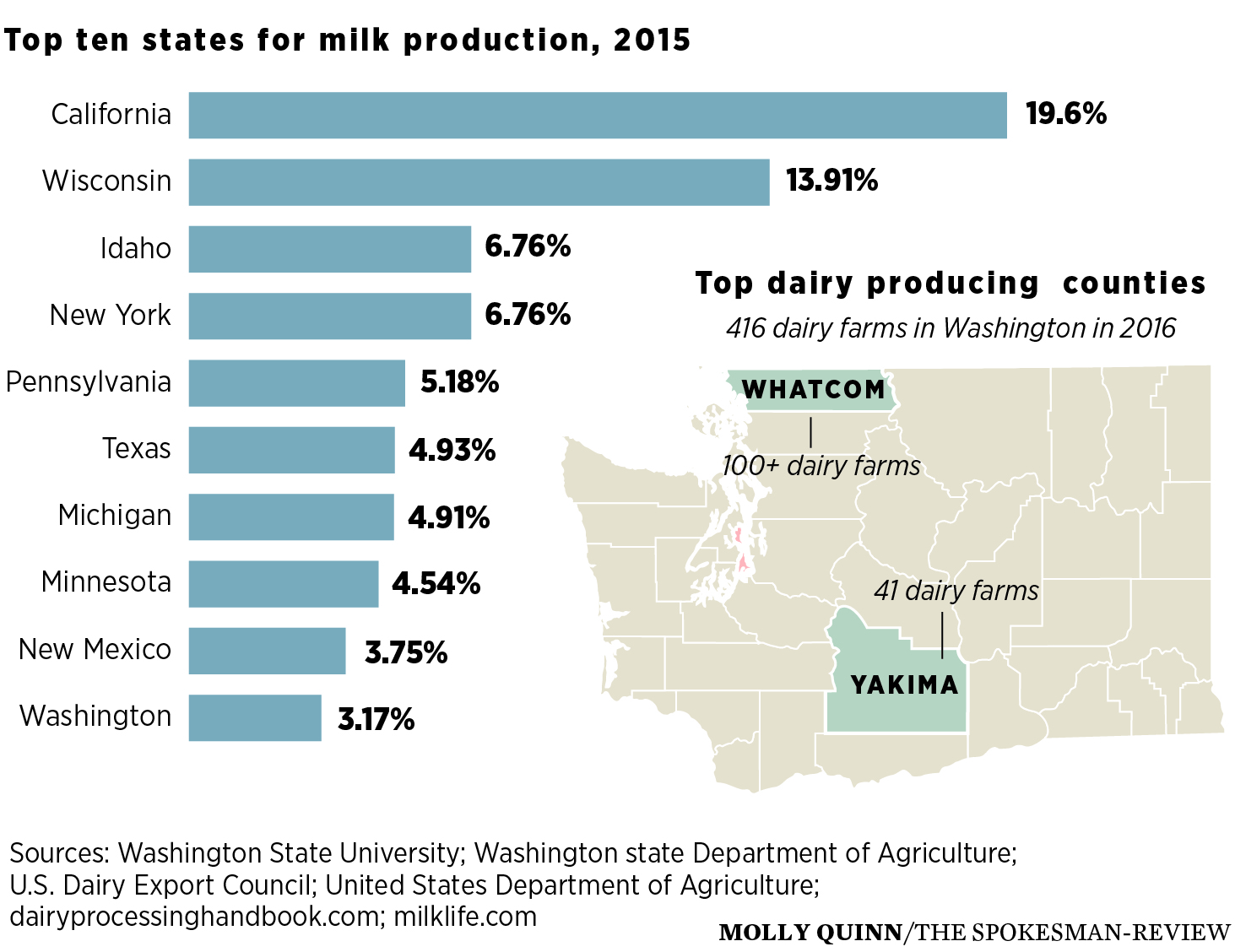 The farm has long rows of steel roofs that provide shade for the cows in the summer and cover from the rain and snow in winter. When the temperature rises above a certain level, computers kick on sprinklers that allow the cows to cool off.

Crews are constantly moving equipment into the pens to break up the soil to make it soft for the cows, which have milking careers that average about five-and-a-half years. After that, he said, they are sold for beef.

When it’s time to eat, the cows walk over to long stretches of concrete slabs that are bordered by the feed bunkers. As the cattle stand and eat their ration, the farm flushes water down the concrete slabs at regular intervals. The water pushes waste downhill into huge steel grates.

That wastewater is then pumped to a treatment facility, which separates out solids and sends the rest of the wastewater to settling ponds where it eventually is recycled back into the system.

“We contain every ounce of water on our facility,” he said.

Front-end loaders load the solid waste into trucks and it’s hauled to another area of the farm, where crews drop it in long rows to compost. A huge machine that looks like a cross between a tank and a combine crawls down the rows and turns the composting waste to ensure it gets enough oxygen.

Within about three months, the compost rows are bagged and sold to landscaping crews or used on the farm as fertilizer.

To keep all those cows producing milk, crews must process and haul 370 tons of feed per day, or about 100 pounds of food every day for every cow.

“A big part of a cow’s daily ration is byproducts” that are shipped by train to the Tri-Cities and trucked to Mesa, VanderMeulen said.

The feed includes what’s leftover from corn after it has been processed for ethanol; mill run, or leftovers from wheat after flour production; and similar byproducts from soybean, canola and cotton seeds.

One bin even had what VanderMeulen said were refried beans that had been rejected by Taco Bell.

All are mixed at varying degrees with silage – chopped, fermented corn or other row crops that are stored under plastic. Crews also add vitamins, minerals and supplements and water to aid digestion as the food is mixed.

“Those (cows) out there are transforming byproducts, things we as humans can’t digest, and making a top quality product for us,” VanderMeulen said.

The portions are all dumped into huge mixing machines that create the “total mixed ration.” The mixers push the feed onto a conveyer belt that transports the mixture into a waiting truck.

But it gets even more complicated. A nutritionist visits the farm every week and suggests changes in the diets of some cows. VanderMeulen installed electronic tags in every cow and he has records that can show what that cow ate yesterday or even a month ago.

“Different groups of cows get specialized feed for where they are at in the cycle,” he said.

Cows produce milk for their calves, so the farm keeps them in a perpetual cycle of pregnancy. The cows are segregated based on where they fall in that lactation cycle.

Some pens hold heifers, or young cows that have not yet had a calf, and other pens hold cows that are ready to give birth. Some cows have orange die on their back, indicating they are not yet pregnant. Others have green, which tells the breeder he’s already inseminated them.

The farm has one employee whose sole job is to manage 30 cows that give birth every day. All those calves join about 1,500 others in separate pens. An employee feeds them off of flatbed trailers containing hundreds of milk bottles.

VanderMeuelen’s operation uses specialized, or “sexed” semen to artificially inseminate all the cows, ensuring that about 95 percent of the calves are girls. Any boy calves eventually get sold for beef.

VanderMeuelen used 4001 as the number on the ear tag for the first heifer calf born on his farm. The latest ear tag, this past week, numbered 42,799.

“That’s how many heifers I’ve produced,” he said.

VanderMeuelen said it’s daunting to think of the advances in the industry since he learned to milk his first cow at his family farm. He said technology is already emerging for devices that can tell dairy owners when a cow is not feeling well or when it needs to be bred, he said.

“In 20 years from now, there will probably be a lot of cows milked by robots,” he said. “It’s already been done, but the technology is very expensive.”