meta New Zealand Farmers lose income as dry weather forces them to stop milking :: The Bullvine - The Dairy Information You Want To Know When You Need It 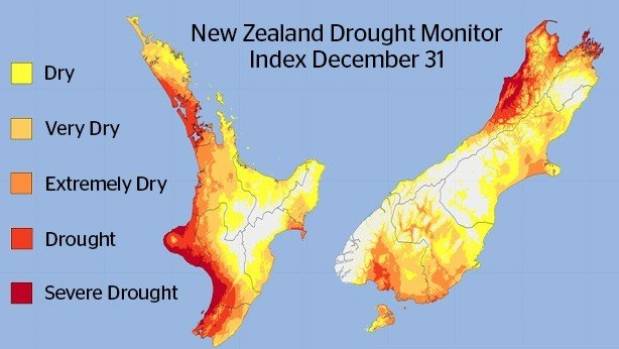 A handful of North Island dairy farmers stand to lose a third of their annual income because they have already stopped milking.

Taranaki, Manawatu/Horowhenua/Rangitikei and Wellington districts are the hardest hit and were declared in drought at Christmas, but Northland and Auckland are suffering from the big dry as well.

Farmers from lower North Island west coast regions with long memories said the last time they had to move dry stock off their farms to find pasture was about 40 years ago.

“They’re not earning income which is the trouble. The cash flows of the farmers really suffering have become very tight, and there are one or two who have even dried off which means two or three months income that they’re not going to receive,” Rural Support Trust chairman for the Manawatu/Horowhenua/Rangitikei region, Chris Hall said.

For most farmers, unless they are winter milking, the season runs from September to May.

Last week Fonterra said New Zealand farmers would produce 4 per cent less milk this season than last because of the dry conditions.

Taranaki Trust chairman Mike Green said “two or three” farmers in his district had dried their cows off.

“The important thing is for farmers to take decisions early, which these people have, and prepare their cows for next season. It’s better to do that than overcook it this year and then have two poor seasons,” Green said.

Hall said farmers faced a multiplicity of problems, from lack of feed, milk being spoiled by high somatic cell counts and pressure from banks.

“A big problem is some farmers have used all their supplementary feed and that’s used  normally in the winter. Because most has been fed now, we’ll have to try and source feed elsewhere.”

A number of farmers had switched to once-a-day-milking but this had caused a spike in somatic cell counts in the milk, so it was no longer fit for human consumption.

“But the milk doesn’t have to be wasted. We’ve been telling farmers to identify the cows separately, retain that high count milk in a separate vat and feed it back to their calves.”

“Quite a few have weaned their calves out onto pasture, but they can put them back on to milk,” Hall said.

Farmers from east coast regions, where rain has been more plentiful, had offered to take dry stock, but some west coast farmers were reluctant to send them to areas where they might be infected with the cattle disease Mycoplasma bovis.

The disease was detected in the North Island, in Hastings, for the first time last month.

“If you’re lucky you might get two good years, but we’ve had six really difficult years. It’s either been drought, floods, low payouts and people can only take so much before they say ‘what am I doing this for, I’m not getting ahead or making headway at all’.”

Rain was forecast for northern areas but it would take weeks for pasture growth to occur.

The loss of confidence in dairy farming is supported by a recent Rabobank survey as well as recent farm sales data, showing a record number of properties on the market but few buyers.

Hall said people had paid high prices for farms in recent years and they had over-extended themselves.

“The number of dairy farms for sale has skyrocketed, it’s not just because of the drought but also lower dairy prices and expenses. There were quite a lot of expensive dairy farms bought and now they [farmers] are wondering if the investment was as good as they thought it might have been.”

“The price they paid was based on production, but it’s now starting to look a little problematic,” Hall said.

He was concerned that when times got tough and people approached their banks for easier terms, there was “some pressure” coming on.

Taranaki farmers were not desperate and not reporting financial pressure. It was generally weather which wore them down, Green said.

The Taranaki Rural Support Trust will hold meetings in Waverly and Patea on January 9, and Manaia on January 12.