meta Nestle dairy supplier accused of animal abuse; cows being punched, kicked, stomped on :: The Bullvine - The Dairy Information You Want To Know When You Need It 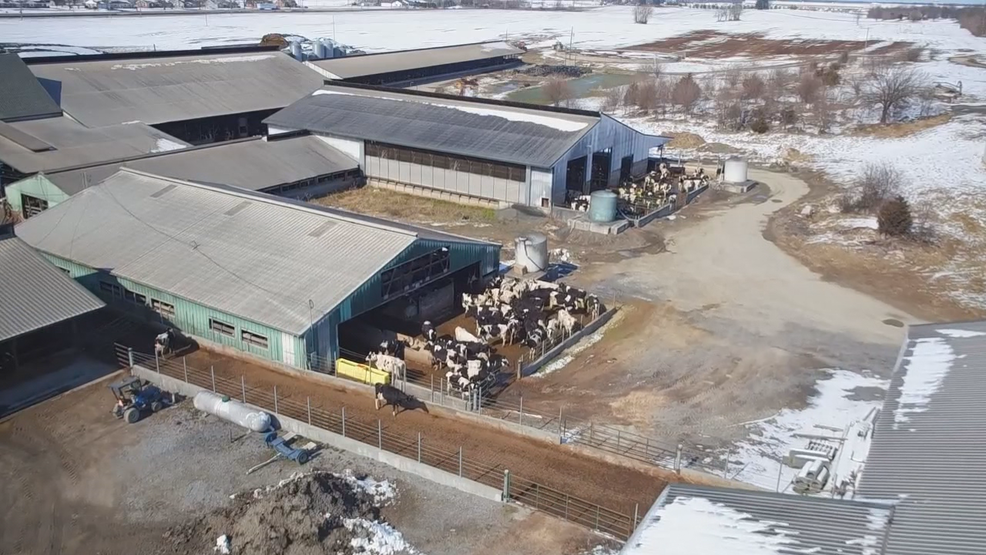 Drone Trak 7 over Martin Farms outside Chambersburg, Pennsylvania. Months before, late last Fall, an undercover investigator with the D.C. based animal advocacy group, Compassion Over Killing or COK, on the ground for six weeks with a hidden camera capturing disturbing video.

Cows being punched, kicked, stomped on and prodded in sensitive areas.

“Why are they shocking her?” asks I-Team Reporter Scott Taylor.

“To get her to move forward into the head trap so she will stay still,” says the Compassion Over Killing investigator who captured the video.

The investigator, who asked not to be identified, posing as a farm worker, capturing what Compassion Over Killing calls eye opening footage that’s heartbreaking to see.

“And they yell, they kick and they buck,” says the COK investigator.

Plus, cows unable to walk hoisted by their hips or feet and then dragged.

“I just remember how heavy her breathing was after that and the scared look in her eyes. At what cost are we getting all these products and who is suffering these animals,” says Johnny.

The video captured on the farm includes cows being sprayed with scalding water to make them move and a botched attempt at putting down a cow. A 2nd shot to the head needed because the first gunshot didn’t do the job.

Who inspects Martin Farms? The Maryland & Virginia Milk Producers Cooperative Association, which is also owned by Martin Farms and 1.100 other dairy farms on the East Coast. The cooperative says animal welfare inspections are conducted every three years, though 7 On Your Side was not given inspection records to confirm that.

After obtaining the video, Compassion Over Killing viewed it and filed an animal abuse complaint with the Pennsylvania State Police, who confirm they are aware of the allegations of animal cruelty. Police say Martin Farms has been fully cooperative and no charges have been filed in the ongoing investigation.

“What we are seeing here is going to be shocking to the public and that’s the key component. When you are there day to day you might become acclimated to what’s happening. It doesn’t make it ok,” says Erica Meier, Executive Director of Compassion Over Killing.

Watch more video of what was captured on the farm.

While the I-Team was off property shooting aerial shots of the farm with Drone Trak 7 dairy owner Joshua Martin, rolled up in front of our camera.

“We can show you the video,” says Scott Taylor.

“Well, I’m not doing anything on camera,” says Joshua Martin.

“Well, you are on camera right now,” says Scott Taylor.

“I am not aware of this, if it is I need to look into it and I’m going to,” says Joshua Martin.

“The very brutal way they did the dehorning of the young calves and the other thing is actual abdominal surgery without any anesthesia, without any pain killers, without any local blocks of nerves and in a filthy environment with a terrified animal,” says Dr. Holly Cheever DVM.

Martin Farms has been raising dairy cows for the past 45 years.

“I don’t want animal abuse. We go through the Farm Program and all that stuff,” says Joshua Martin.

“My boys get trained and all of that,” says Joshua Martin.

They sent four people to watch the video at our ABC 7 studios who declined to answer our questions on camera. Their spokesperson did answer questions on the phone and issued a statement: 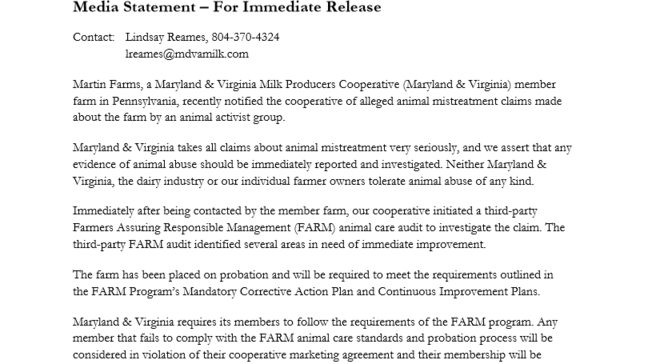 The Maryland and Virginia Milk Producers tell us previously there were no animal welfare concerns at Martin Farms and the Farm had never been placed on probation.

Martin Farms through the Maryland and Virginia Milk Producers issued a statement: 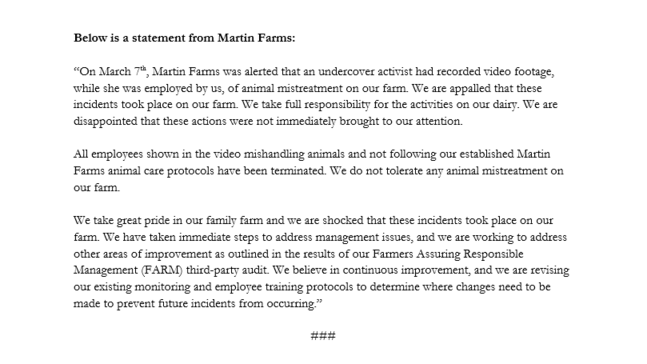 Four employees identified in the video mishandling animals were immediately fired as was the foreman.

We are deeply disturbed and shocked at the mistreatment of dairy cows shown in this video, and strongly condemn it. Consumers trust us to hold our suppliers to strong standards, and these actions violate that trust. As soon as we learned of this issue, we immediately stopped accepting milk from Martin Farm.

Our company is strongly committed to ensuring the highest possible level of farm animal welfare in our supply chain. In addition to complying with our own high standards, we insist that our dairy suppliers comply with the industry-wide Farmers Assuring Responsible Management (FARM) animal care program. When we find non-compliance, we take decisive action. This can include work to eliminate those practices, removing a farm from our supply, and suspending or ending the relationship with a supplier.”