meta Low Milk Prices Sending Some Ohio Dairy Farmers Out of Business :: The Bullvine - The Dairy Information You Want To Know When You Need It 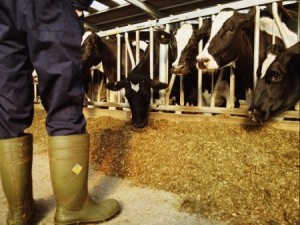 Nervous about the dramatic drop in milk prices, Ohio’s dairy farmers are leaving the business at a higher than usual rate.

Every year, some farmers retire and give up their dairy licenses, but there’s been an uptick recently. In March 2018, there were 2,253 licensed dairy farms in Ohio – a drop of 59 farms in five months.

“Farmers are deciding they can no longer dig any deeper into their equity to pay for what I call ‘the privilege of milking cows,’ ” said Dianne Shoemaker, Ohio State University Extension field specialist in dairy production economics. OSU Extension is the outreach arm of The Ohio State University’s College of Food, Agricultural and Environmental Sciences (CFAES).

Profits for milk are low because the price that dairy farmers get paid for their milk has dipped in recent years. In 2014, dairy farmers nationwide basked in high prices. Worldwide demand was high, and the number of cows producing milk was comparatively low. Since then, milk prices have been steadily sliding, as have dairy farmers’ profits.

“There’s just so much excess milk right now, and it looks like that’s going to continue to be the case for a while,” Shoemaker said.

In Wayne County, the state’s top dairy county, Rory Lewandowski, the county’s OSU Extension educator, is increasingly hearing about farmers selling their farms or their cows. And others are seeking out bank loans to continue operating.

“Nobody is doing really well in this situation,” Lewandowski said. “Definitely people are depressed.”

Some of the dairies in Mercer County that recently closed did so because making more of a profit would have required them to expand, purchase new buildings and modernize their milking equipment. The investment was too great a risk given the low prices, said Dennis Riethman, an OSU Extension educator in Mercer County. About a half dozen farms in that county recently closed.

“And I anticipate there will be more within the next year,” Riethman said.

Some Ohio dairy farmers are having to seek out new markets because Dean Foods, the second largest dairy company in the United States, has announced that beginning May 31, it will cut its contracts with 100 independent conventional dairy farmers in Ohio, Pennsylvania, New York, Indiana, Kentucky, Tennessee, North Carolina and South Carolina.

Also, milk cooperatives as well as independent milk processors have sent out letters in the past two years dropping some dairy farmers due to low demand and an oversupply of milk on the market, Shoemaker said. Previously, farmers typically were only dropped from cooperatives when they produced poor quality milk.

Dairy farmers no longer receive a bump up in pay for producing more milk in the fall, when the demand is typically highest and production lowest, Shoemaker said.

Once a farmer leaves the dairy business, it’s not necessarily easy to get back in when the price of milk improves, Shoemaker said. That’s because the farmer has spent years, even decades, developing a productive herd of cows and replacement heifers, so if they are sold off, it can take just as long to get started again, she said.

Or if a farmer sells off the milking herd and keeps the replacement heifers, there’s no income.

“And you’ve got all these mouths to feed. That’s not usually an attractive option,” Shoemaker said.

Dairy farmers can consider other ventures to make money on the farm, but the switch typically is not easy. A farmer raising field crops for a living needs to plant 1,000 to 2,000 acres to earn enough to rely solely on that income, and with low prices for corn and soybeans, that’s especially tough.

While organic milk and other products have gained in popularity in recent years and typically offer higher profits than traditional milk, the organic milk cooperatives that take on the independent milk suppliers have no openings right now, Shoemaker pointed out.

Like the price of anything, what goes down must come back up – at some point. Demand for milk will increase. Or supply will decrease. Or a combination of the two.

“But,” Shoemaker said, “we’ve been waiting three years for that to happen.”