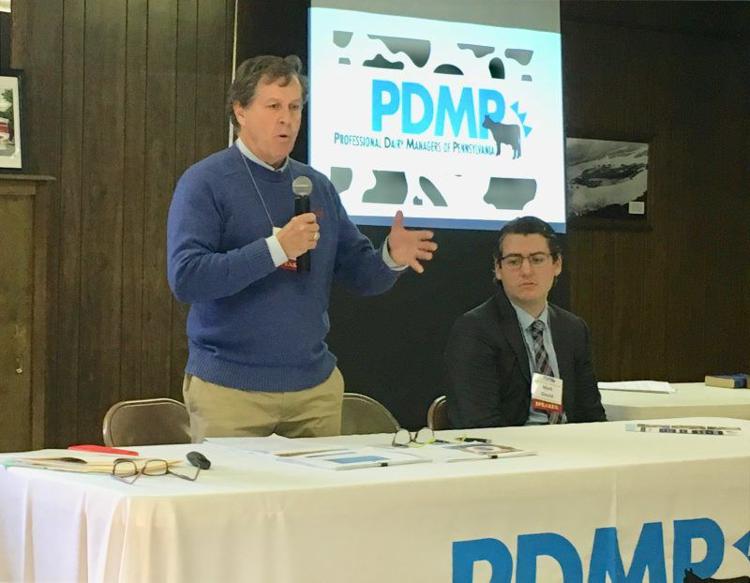 Three experts who deal in dairy products around the world came to Lancaster County on Nov. 14, but could not offer much hope that local dairy farmers’ current financial plight will end anytime soon.

The way out, they suggested, may be to produce niche milk-based products such as organic milk, diet butter, artisan cheeses — even a whey protein concentrate for weightlifters.

Also, seize on the Amish-made and made-in-Lancaster-County branding, they advised about 50 members of the Professional Dairy Managers of Pennsylvania at a meeting in Bainbridge, Pennsylvania.

Producing ever more milk from cows — even though that may be a marvel of Pennsylvania agricultural efficiency — will not solve the current low- or no-profit status of being a Pennsylvania dairy farmer, the panelists said.

“It’s a tough market, and I don’t want to give you any kind of a notion that it’s going to get better,” said Tom Wegner of Land O’ Lakes dairy cooperative.

Speaking at a forum titled, “Getting Past the Spin on Dairy Economics,” the panelists laid out a sobering future for Pennsylvania dairy farmers. The outlook, they said, is driven by:

• Continuing over-production of fluid milk, even while consumer demand retreats.

• An export market that will be centered on the West Coast, not the East Coast.

• A decline in the nation’s appetite for yogurt.

Also threatening the industry is a trade war initiated by the United States.

And the trend toward largescale dairy farms also works against the Lancaster County icon of postage-stamp-size farms, the panel said.

Half the milk now produced in the United States comes from farms of 1,000 cows or more. In Pennsylvania, the average herd size is 100.

All three agreed that dairy prices in the region cannot be increased by building more processing plants or counting on world population growth to increase U.S. exports.

Rather, all three encouraged local dairy farmers to think outside the milk carton and embrace what they called “value-added” milk products.

Consumer demands are changing and those whims will dictate where profits can be made with milk, the panel preached.

“I challenge you to not make milk but find ways to create value in the end product that consumers ultimately will be buying,” said Matt Gould of the Philadelphia-based Dairy & Food Market Analyst.

“You’re producing a drink and you’re getting your butt kicked by flavored water. Consumers don’t want to drink their calories.

“Consumers’ demands will be key, and they are willing to pay for them.”

And those demands can go beyond the product itself, to how it is produced and the impact of that production.

Among the public’s growing wishes is more humane treatment of livestock, down to wanting to see cows and their calves stay together and an end to de-horning, Gould observed.