meta Embryo Transfer Activity in Canada: A Snapshot Look :: The Bullvine - The Dairy Information You Want To Know When You Need It

Embryo transfer (ET) has been commercially available for over 40 years as a means of increasing the number of progeny from a given female. The main objective has always been for breeders to select the best animals in their herd and use ET to produce more daughters as herd replacements and perhaps also sons for entry into A.I. The purpose of this article is to take a snapshot look at the usage of ET in the Holstein breed in Canada.

Figure 1 shows the trend in percentage of registered Holsteins born since 2000 that resulted from embryo transfer. For females, this percentage has been very stable ranging from 3 to 4.4%. On the male side, however, a significantly higher percentage of those registered were the result of embryo transfer. From 2000 to 2013 this percentage gradually increased from roughly 40% to 60% but this trend has been decreasing in recent years to the 50% level in 2016 and 2017. 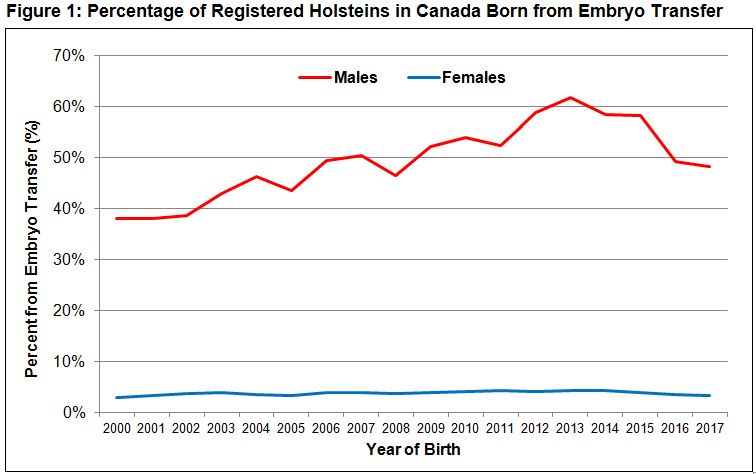 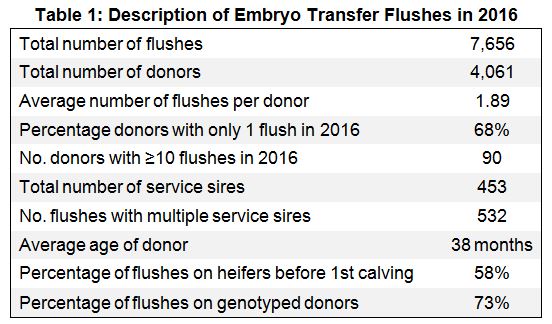 In terms of the service sires used for these flushes in 2016, there were a total of 453 involved and 532 of the flushes involved more than one sire. The fact that multiple sires are more frequently used for embryo transfer flushes stems from the current use of genomics. Each progeny born from such flushes can now have their sire accurately identified as a by-product of genomic testing. Table 2 lists the ten most common service sires involved with the ET flushes in 2016, led by Doorman at 5.7% as a proven sire and Solomon at 3.5% as a genomic young sire. 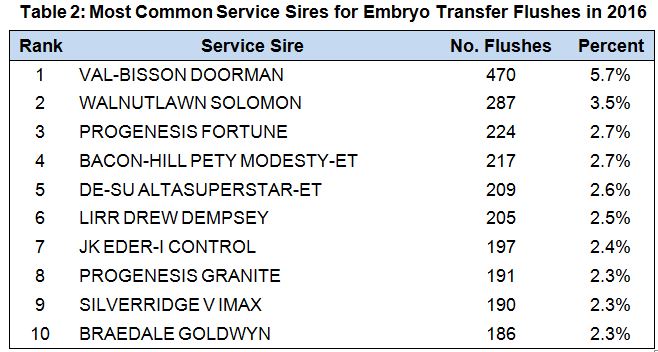 Perhaps one of the biggest changes over time, which has resulted from the introduction of genomics, has been the significant shift towards the use of younger females as ET donors. As shown in Table 1, 73% of the donors had a genomic evaluation and 58% were heifers that had not yet calved for their first lactation. While the average age of all 2016 donors was 38 months, Figure 2 shows the distribution of all flushes by the age of donor. 23% of all flushes involved a donor that was less than 12 months old and another 25% were yearling heifers. This means that almost half of all flushes (i.e.: 48%) during 2016 involved heifers under two years of age. Another 28% of the donors were between 2 and 4 years of age and 25% were 5 years or older. 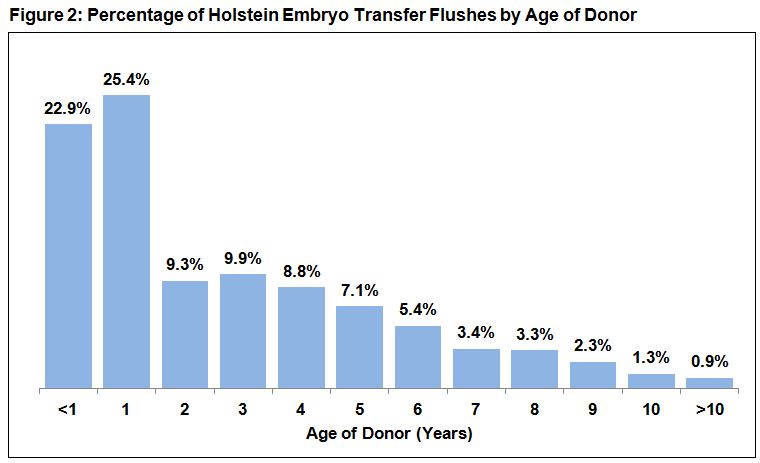 For various reasons, the adoption rate of embryo transfer has not grown for several decades representing less than 5% of registered females each year. Based on an analysis of the 7,656 flushes during 2016, which involved 4,061 donors and 453 different service sires, the impact of IVF technology and genomics are evident. Almost half of all flushes in 2016 were from donors under two years of age and the use of IVF allowed some heifers to achieve over 20 flushes during the year. Since 73% of all donors were genotyped, the use of genomics has helped breeders better identify their genetically superior animals for embryo transfer.