meta Dairy industry has concern about constant talk of its impact on climate change :: The Bullvine - The Dairy Information You Want To Know When You Need It 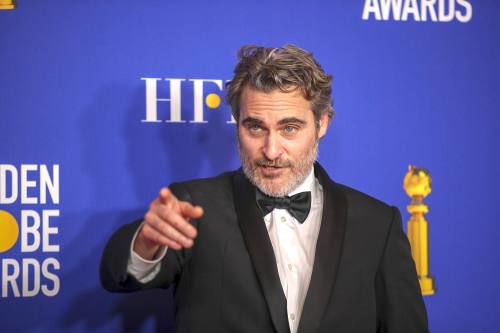 Joaquin Phoenix, backstage at the 77th Golden Globe Awards on Jan. 5. The climate change discussion is not going away and dairy farmers are looking to get out their story out regarding the industry\’s impact on the environment.

The holiday season might be known as the most wonderful time of the year, but shortly after the calendar turns to January, Hollywood enters its awards season.

The Golden Globes, The Screen Actors Guild Awards and finally the Oscars make the early months of the new year the most glamorous time of the year, at least in the eyes of Hollywood. Undoubtedly, some actors use the national attention and the limelight to speak about causes or events they feel are important. This year, the devastating wildfires of Australia have been a popular choice.

In that same vein, so has climate change.

While the actors in question feel they are trying to do good to bring this awareness to the masses, they also are pointing the finger. In particular, some of the finger-pointing is being directed at the dairy and beef industries.

While the claims of actors such as Joaquin Phoenix regarding the role both those agricultural industries have had on climate change are not causing too much concern with local farmers, Missaukee County Farm Bureau President Jodi DeHate said there is always potential these claims could impact policy.

“I think most of my farmers are in the category of they don’t have a reaction if they even paid attention to it,‘ DeHate said. “People, whether it is Ellen (DeGeneres), Joaquin Phoenix or (awards shows like) the Golden Globes, let’s point out the hypocrisy,‘ she said. “They are flying on jets, eating foods from across the globe and wearing dresses or suits only once. But let’s not eat meat or dairy. That seems to be the problem.‘

DeHate said there are always policies that Farm Bureau is working on to help get their message out there. In reality, both the meat and dairy industries are very conscious of their impacts on the environment and have been leading the way in not wasting anything.

Whether it is the beef industry raising cattle on pasture or dairy producers recycling everything for feed such as sugar beet pulp, dry distiller’s grain, cottonseed meal, and canola meal to name a few. Although both industries have been doing these types of things before it was considered hip, DeHate said it is all about the reach of the message and actors have a much longer one when compared to that of either meat or dairy industries.

Regardless if farmers react to what they believe to be nonsense, DeHate said overall it has people in the agricultural industry nervous.

Recently, Starbucks did an environmental assessment and it showed dairy products are the biggest source of carbon dioxide emissions across the coffee giant’s operations and supply chain. As a result of this recent report, the Seattle-based company announced ambitious goals for reducing its carbon footprint and impact on the environment.

By 2030, the cafe chain is targeting 50% reductions in carbon emissions, water withdrawal and waste sent to landfills. Considering in 2018 Starbucks was responsible for emitting 16 million metric tons of greenhouse gases, using 1 billion cubic meters of water and dumping 868 metric kilotons of coffee cups and other waste, that task will be huge.

Starbucks Chief Executive Officer Kevin Johnson has said that will include pushing consumers to choose milk made from almond, coconuts, soy or oats, whose production is environmentally friendlier than dairy. Starbucks also is testing new drinks made with plant-based ingredients and seeking ways to make whipped cream without emitting nitrous oxide, a greenhouse gas. Starbucks also aims to lower the cost of dairy alternatives by helping suppliers boost output.

Michigan State University Extension Dairy and Beef Cattle Health and Production Senior Educator Phil Durst will be the first to say he is not an expert when it comes to beef and in particular dairy’s impact on climate change but he believes agriculture does a good job of being good stewards of the environment.

“I think there is a story we haven’t told. We have been more efficient in dairy. It is not a waste of resources,‘ he said.

Whether it is using the waste of other industries like DeHate said or harvesting natural gas from or using manure as fertilizer, the resources farmers use are used wisely.

Durst mentioned comments made by Dairy Management Inc. CEO Tom Gallagher regarding not only the Starbucks announcement last week but also Brightmark Energy in partnership with four Florida dairy farms.

While the focus of Starbucks’ announcement was discussed already, the announcement by Brightmark Energy has a different tone.

In Gallagher’s comments, he said the energy company and the dairy farms announced a project to convert 230,000 tons of manure per year into renewable gas, reducing methane emissions from Central Florida dairy farms. He also questioned why those in the dairy industry have concerns and/or anger regarding the Starbucks’ announcement.

“While this specific company announcement was a surprise, the fact that more and more companies, organizations and governments will make similar announcements in the very near future should come as a surprise to no one,‘ Gallagher wrote. “Some of these companies are well-intentioned even if they are often misguided.‘

He said all of the companies are doing what they believe is in their financial best interest. If a segment of consumers believes that plant-based foods are better for the planet or healthier for them, companies will play to that perception whether the perception is accurate or not, he said.

Like the beef and dairy industries, they are running a business and they will make decisions based on what they think is best for business. In turn, defense and denial are not strategies for success, according to Gallagher.

He said a better option is to help set the direction of environmental policies and regulations.

“We can engage with companies and thought leaders to understand and value what we do. We can work to assure sustainability and profitability go hand-in-hand for farmers,‘ he said.