meta Cut the wrap! UK dairy farm aims to be first to go single-use plastic-free :: The Bullvine - The Dairy Information You Want To Know When You Need It 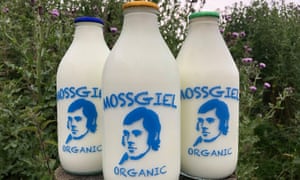 Farmer Bryce Cunningham chose Robert Burns to be the face of his milk bottles. The Scottish poet is said to have worked on the surrounding land. Photograph: Mossgiel Farm

Lying in a field of grass among his herd of dairy cows, Ayrshire farmer Bryce Cunningham picks up and pretends to throw away a plastic carton of milk. This is what we want to get rid of on our farm, he says in a promotional video, as he explains his quest to become the UK’s first single-use plastic-free milk producer.

After raising more than £10,000 from a crowdfunding campaign, he’s managed to replace single-use plastic cartons with 32,000 glass bottles adorned with the face of Robert Burns – who’s said to have once worked on the farmland – which he is able to wash and reuse.

There are, of course, other farms selling milk in glass bottles, but Bryce is now also eliminating single-use plastics from feed, chemicals and other inputs bought onto the farm, as well as finding alternatives to plastic silage wraps used to store fodder for feeding the cows over the winter.

As well as buying glass bottles, he refurbished a milk bottling machine dating back to the 1960s from a local dairy farm that had been left unused after the owner had left dairying.

The milk from Bryce’s 55-cow herd, along with milk from two other organic farms that supply him, goes out to around 8–10,000 people in glass bottles across Scotland.

From January, he will start trialling the supply of milk in two-litre glass containers (the milk is currently distributed in two and five-litre plastic cartons) to the 300 cafes and coffee shops he distributes to in Edinburgh and Glasgow. That was made possible after he sourced the larger containers from a manufacturer in the US as the more common one pint bottles are unsuited to food service outlets with a high turnover of milk. The bottles will come with tin screw caps that can also be washed and reused.

“It is more expensive to produce milk this way because we need to employ a washer to clean the returned bottles and plastic cartons. But the idea of using glass and cutting out single-use plastic fits with what we want our business to stand for. We want to be more aware of waste and our environmental footprint,” said Bryce.

Despite reports of a rise in interest in plastic-free milk, glass bottles have continued to decline to 2.1% of liquid milk sales in the UK, according to the latest industry figures. Back in 2001, glass bottles represented 22.5% of total milk sales.

Dairy UK said the industry as a whole had committed to eliminating unnecessary single–use plastic by 2025. Plastic bottles of the type commonly used for fresh milk are also among the most commonly recycled items in the UK, with 76% of them recycled, according to the Waste and Resources Action Programme. However, the amount of recycled material in new milk containers has fallen to around 25% as the dairy industry has been unable to compete with other non-food companies willing to pay higher prices for recycled plastics.

A wholesale move away from plastic packaging would require government investment to promote innovation, said Dr Judith Bryans, chief executive of Dairy UK. “We must also bear in mind that plastic provides food products with durable and safe packaging, avoiding unnecessary food waste, and can present a more energy efficient form of packaging when compared with other types,” she added.

While switching over to glass reduces potential plastic waste, the benefits in terms of greenhouse gas emissions depends on the number of times the bottles are re-used and whether the milk is sourced locally. The dairy company Arla claims that plastic milk bottles have lower total carbon emissions than glass, with reduced transport emissions per bottle because they can be packed more tightly together.

Glass bottles would need to be reused at least 20 times, concluded a study by researchers at Manchester University, in order to make their carbon footprint comparable to partly recycled plastics.

Bryce thinks he has already beaten that: they are still re-using the batches of glass bottles and plastics that he purchased last year. “A few of the bottles and plastic containers have been broken and had to be recycled, but most of them have gone through 52 washes now and are still being re-used.”

Plastic bottles are not the only potential single-use plastic waste stream on dairy farms. Around 85,000 tonnes of silage wrap and other agricultural plastic waste is generated every year by the farm sector. Silage wrap is used by dairy farmers to store fodder and feed cows over the winter months when the grass is not growing. However, it is often contamination by soil, which makes it more difficult to recycle.

In 2009, the UK government rejected calls to introduce a producer responsibility scheme to ensure all on-farm plastics were recycled. It said the size of the waste stream was too small (at 1.5% of total plastic waste in the UK) to justify such an intervention.

Bryce said he was working with a local company on a biodegradable silage wrap, but that the designers currently lacked funding to bring it to market. He only sources chemicals and other inputs for his dairy from agricultural companies that will take back plastics after use.

Although he’s been contacted by other dairy farmers about going single-use plastic free, Bryce does not expect a large number to follow suit.

“Cheap milk in plastic containers is not going away yet, but I think we will see a second tier of milk production from smaller farms being sold directly to customers at a premium that allows them to farm more closely with nature.

“We see our business being part of a revival of an old-fashioned milk industry that cuts out the big dairy companies and supermarkets and creates a more sustainable model of dairy farming,” he said.