meta Central Pa. dairy families fear losing farms as demand for milk drops :: The Bullvine - The Dairy Information You Want To Know When You Need It 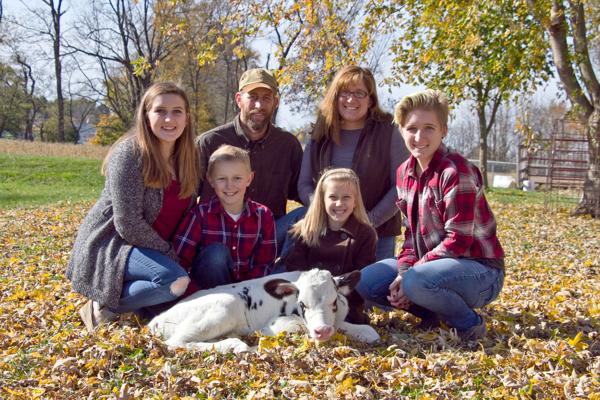 The family of Alisha and John Risser, who are dairy famers in Lebanon County, Pa. (Jennifer Amy Photography and Design/provided by family)

A dozen or more small dairy farmers in Lebanon and Lancaster counties have learned they must find a new milk processor within 90 days.

It comes at a time when processors say there is a glut of milk on the market, and not enough customers.

Two of the affected farmers, Alisha and John Risser of South Lebanon Township, say they have contacted eight processors, with six saying they didn’t need any more milk suppliers, and two not returning the call.

“We’re overwhelmed,” Alisha Risser, 39, said on Tuesday. “We’re setting up an exit plan … We don’t know what else to do.”

She and her husband John, who is 45, milk 80 cows per day on farm that has been in the family for generations. They have four children.

The Rissers received a certified letter on Saturday informing them Swiss Premium Dairy in Lebanon County would stop purchasing their milk after 90 days.

Nelson Troutman, a Lebanon County dairy farmer who does business with a different processor, said he believes between 12 and 15 dairy farmers in Lebanon and Lancaster counties received such a letter. Many are younger farmers with families, he said.

A woman who answered the phone at Swiss Farms on Tuesday said no one there could discuss the situation. Swiss Farms is owned by Texas-based Dean Foods. A Dean Foods spokeswoman didn’t immediately return a phone message on Tuesday.

Dairy Heard Management, a trade publication, published an article Monday reporting that Dean Foods has informed at least two dozen milk producers in Pennsylvania, Kentucky, Tennessee, North Carolina and Ohio that it won’t be taking their milk after May 31.

A Dean Foods spokeswoman told the publication the decision is due in part to “a surplus of raw milk at a time when the public already is consuming less fluid milk and companies assertively entering or expanding their presence in the milk processing business, have exacerbated an already tenuous situation in a highly competitive market.”

Alisha Risser said she and her husband will continue to look for a processor, but acknowledged they are terribly worried and now they must have a plan in place for their cows if they have no processor and income after 90 days.

Troutman said he too fears the affected farmers will be unable to find a processor. He said it’s a problem that has been building for a long time, and he blames it on the fact that Pennsylvania has a price minimum for milk.

“That’s why all this milk is spilling into Pennsylvania from other states. They get more for their milk in Pennsylvania,” Troutman said, adding that the market is being flooded by huge operations with thousands of cows.

He said the price mimimim also cuts into the demand for milk in Pennsylvania.

Risser said she and her husband have been running their dairy farm for 17 years. She said recent years have been hard on them and other smaller dairy operations in Lebanon and Lancaster, putting some of them out of business.

“People are working two and three jobs in order to be able to milk cows,” she said.

She believes there are assorted, complicated problems facing her industry. She further said small dairy farmers such as hers invest their own money in their businesses and strive to produce a top quality produce while also protecting the land.

But they are probably hurt, she said, by the fact that they don’t market those factors, and live by the belief “that you should be satisfied by what you do and not put yourself on a pedestal.”