meta 168 RZG Siemers Merryguy Daughter Tops the 2019 German Masters Sale at € 47.000 :: The Bullvine - The Dairy Information You Want To Know When You Need It

The German Masters Sale 2019 goes in the books as a very successful edition with an average price of EUR 5.525 on the live lots, selling to buyers from 14 different countries and a topseller of € 47.000!

The sale was held in the beautiful facilities of the RUW, the Auktionshalle in Fließem. Almost 1000 people attended the sale which created a great atmosphere throughout the complete sale. There were as well many viewers online who were also active bidders. The online bidders together with the bidders attending the sale created a never seen interaction.

The sale facts are speaking for themselves with a clearance of >95% and an average price of € 5.525, the embryo combinations  averaged € 582 / embryo! Lots sold to no less than 14 different countries!

Topselling female this year was Lot 11. PrismaGen Hailey – one of the highest RZG heifers ever sold on a public auction World Wide, RZG 168, A2A2, BB, sired by the Charley son Siemers Merryguy. PrismaGen Hailey sold for € 46.000 to Mr. Phillipe Arnold from Luxembourg.

One of the best young R&W cows in Europe right now, NH DG Arvis Silky Red noted the 2nd highest price of this auction. With a contending bidders from Spain, Switzerland & United Kingdom, this reigning German Reserve 2yr. Old Champion R&W sold for € 42.000 to Azzopardi from Malta & partners. Silky is a grand daughter of none other then Des-Y-Gen Planet Silk EX-90-CAN. 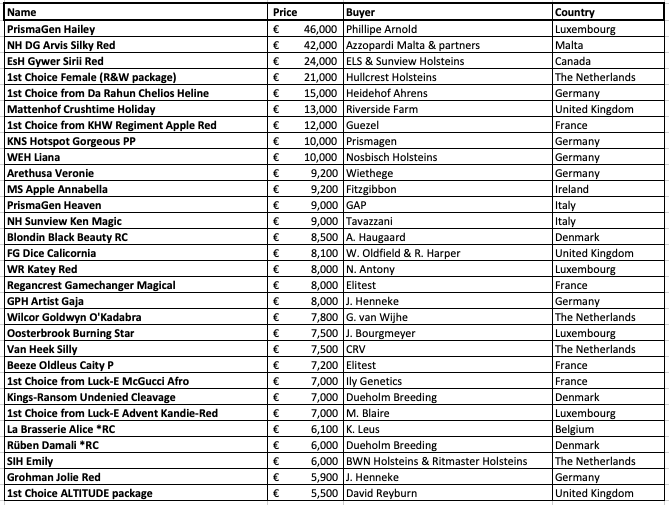