meta Mel and Janelle – the city slickers turned New Zealand dairy farm superstars :: The Bullvine - The Dairy Information You Want To Know When You Need It 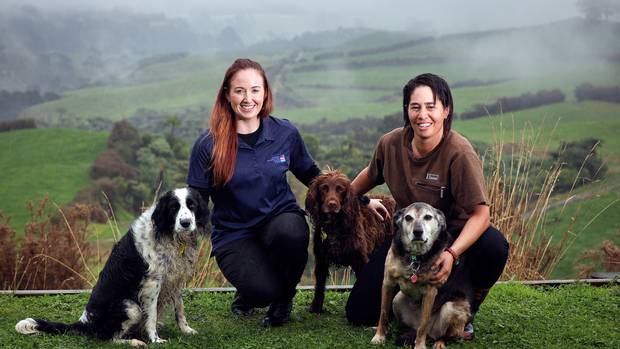 Janelle Nee (left) and Mel McEntyre with three of their furry friends.

After trading in the corporate life in downtown Auckland’s grey streets for the luscious green pastures of a Ōhauiti dairy farm, Janelle Nee and Mel McEntyre aren’t looking back.

The couple took over Nee’s family farm in 2016 and they’ve taken to farming like ducks take to the water, picking up a Fonterra farming award and getting the farm out of a deficit along the way.

“Three years ago if someone had said to me, ‘oh you’re gonna love your cows,’ I would’ve been like, ‘oh whatever’,” McEntyre says, with a flick of the hand and a roll of the eye.

“But I do love my girls. You get to know their personalities. Most of them end up getting nicknames.”

The duo both had a rural upbringing – Nee on the existing farm and McEntyre in Glenorchy – but neither knew the first thing about farming before moving back.

Both had corporate backgrounds, with McEntyre in accounts and operations management while Nee was in private education.

McEntyre learnt the ropes by shadowing the existing farm worker for a year, but the two came in “totally naive,” she says.

The seeds for the move were sown in 2015 when McEntyre picked out the location for their hilltop house on the farm.

Within a year, their Auckland house was sold and they had moved into a newly-built house on the farm in 2016.

She says she never liked corporate work and farm duties are more rewarding.

“I didn’t realise how stressed I was in Auckland until I moved down here and everything eased off. It all felt cluttered there.”

“It shows how if you’re doing what you love, it can make all the difference,” Nee adds, who now works as a vet clinic business manager.

The farm has also been pulled from a deficit to breaking even, but money doesn’t make the couple’s world go around.

“As long as there’s food on the table I’m not fussed,” McEntyre shrugs.

The duo said the farming community and Fonterra were supportive and they could ask for help or advice.

They prioritised being environmentally sustainable, with a farm environment plan to manage carbon emissions and protect waterways.

“We make a real effort to show people that there are farmers out there that care about their animals and the environment,” Nee says.

“You don’t have to pillage the land and get every last drop of profit out of it.”

Aside from enjoying the lifestyle change, they’ve proven themselves to be better than most at farming and recently picked up two Fonterra awards for milk with a low bacteria count and the other was for grade free milk.

This meant they came out with the top 10 in the Bay of Plenty and the top 4 per cent in New Zealand, McEntyre says.

All aspects of farm operations contributed to the win, from what the cows were fed to the hygiene of the cowshed.

“I was pretty chuffed with that,” McEntyre says.

Nee credits the success they have had in the past 12 months to the “business operations” approach McEntyre takes to farming.

“I’m all about working smarter, not harder. I might still clock up the hours, but that’s probably because I’m hanging out with the cows,” McEntyre laughs.

“Considering they are new to dairy farming, this is especially impressive and both Janelle and Mel are a great addition to the farming family.”