meta Holsteins born at Penn State to improve genetic diversity are ‘udderly’ amazing :: The Bullvine - The Dairy Information You Want To Know When You Need It 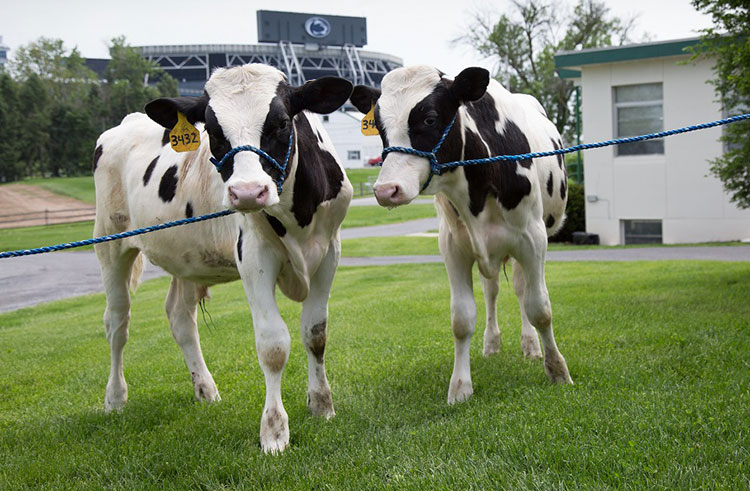 The six bundles of Holstein joy born at the Penn State Dairy Barns in April of last year — the outcome of a research project to improve genetic diversity in the breed — have garnered a fan following.

A story about their birth on Penn State News — subsequently picked up by a number of national and international media outlets — led to interest and well wishes from near and far for the bouncing baby bovines and their faculty guardians, Chad Dechow and Wansheng Liu, of Penn State’s College of Agricultural Sciences.

Now, little more than a year later, folks are still asking, “How are the calves doing?”

“Fantastic,” Dechow shared, adding that nine additional calves, born in November, have joined the first group of three males and three females. “They all are healthy and doing the things young bulls and heifers do — their celebrity status in the ‘dairy world’ has not gone to their heads.”

Though the Holstein breed dates back 2,000 years to the Netherlands, these cattle are relatively new to America — the first Holsteins were brought to the country in the mid-1850s by a Massachusetts breeder named Winthrop Chenery.

An interest in Holsteins led Dechow, associate professor of dairy cattle genetics, and Liu, professor of animal genomics, both in the Department of Animal Science, to research the history of the breed. In doing so, they learned that nearly all male Holsteins alive today can be traced back to two bulls from the 1960s: Pawnee Farm Arlinda Chief and Round-Oak Rag Apple Elevation.

This narrowing of the genetic base is not a good thing for Holsteins because it leads to inbreeding, which has the potential to cause genetic defects, poor health and poor milk production, according to Liu.

The researchers embarked on what they thought would be a difficult task — finding descendants of other lineages. Fortunately, their first call to the National Animal Germplasm Program in Fort Collins, Colorado, a repository under the U.S. Department of Agriculture, proved fruitful — the repository recently had procured semen from two lost Holstein lineages, including samples taken from a bull in 1954.

The samples were used to fertilize eggs to create a dozen embryos from genetically elite Holstein females from Select Sires Inc., a dairy genetics company located in Plain City, Ohio; those embryos were implanted in surrogate heifers at Penn State’s dairy farm, and the rest, as they say, is history.

Now that the older group of siblings have reached sexual maturity, two of the bulls — Les and Charles — named after geneticists from the University of Minnesota that were involved in the development of the genetic line that their sire came from — were transported to their new home at Select Sires in March. There, their semen is being collected for breeding purposes.

As to how these Holsteins differ from their modern-day herd mates, Dechow said the physical characteristics are noticeably different — most obvious is that the older lines are quite a bit thicker or more heavily muscled. They also are a bit shorter than their peers but weigh about the same. Les and Charles weighed more than 800 pounds before they left Penn State.

Another characteristic that is becoming clearer, especially for the second group of calves, is that they are more “spirited” than most of the other cows at the barns.

“That’s just a nice way of saying they are not as easy to handle,” Dechow said. “Of course, there is a range of temperament in modern Holsteins as well, but this group does seem to not like being handled.”

He and Liu have been pleased — and a bit overwhelmed at times — at the number of inquiries received about the cows, and not just from people in the dairy industry.

“We are grateful for the interest in our project and the Holsteins,” Dechow said. “Our ultimate goal is to have them improve genetic diversity in the breed so that future generations will be healthier and stronger. They are a special group of Holsteins, and we are excited to watch their journey.”

Partners on the project include Penn State’s College of Agricultural Sciences, the National Animal Germplasm Program, Trans Ova, Select Sires Inc., the University of Minnesota and ABS Global. Perhaps the most important partners, Dechow noted, are the management team and employees at the Penn State Dairy Barns who care for the cows every day.