meta Undercover footage of violence at British dairy farm prompts investigation :: The Bullvine - The Dairy Information You Want To Know When You Need It 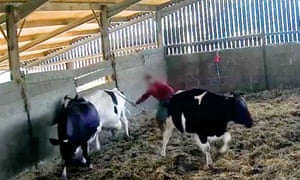 Shot from a video released by Surge exposing mistreatment of diary cattle at a UK dairy farm. Photograph: Surge Activism

The RSPCA is investigating a British farm, after undercover footage which appears to show dairy cows and calves being force fed, punched and beaten was released by an animal rights group.

The footage, taken on a farm in Buckinghamshire, appears to show workers beating and swearing at dairy cows. Later in the footage, workers appear to drag young calves across the floor, and at one point appear to be force-feeding a young calf, as well as beating it. At one point a cow appears to be attempting to tend to a still-born calf.

The footage was obtained over July and August of last year by Animal Rights group Surge. It has been released on their website.

The farm in question has been named by the activist group as C J and G R Carnell dairy farm. The Guardian spoke to the farm, but they said they would not be able to comment as they had not at that time seen the footage. Subsequent attempts to contact them have not been successful.

Ed Winters, co-director of Surge, said: “The footage seen here shows not only a flagrant violation of the safety of these animals, but points to the wider systemic issues found throughout the whole dairy industry.”

He goes on to say that the footage also shows the reality of “the separation of new-born calves from their mothers.”

The investigation follows a number of stories in the last year about cruelty on farms. In November 2018 two men pleaded guilty to charges of animal cruelty on a farm in Lincolnshire.

The footage has been passed to the RSPCA so that it can consider prosecuting those involved.

Sara Howlett, the RSPCA national media manager said: “This footage is distressing and we are looking in to it. We urge anyone with concerns about animal welfare to contact us on 0300 1234 999 as soon as possible so we or the relevant authority can act on the information and alleviate any potential suffering.”

The government’s Health and Safety Executive guidelines (HSE) state that when it comes to handling livestock, workers should “never use sticks and prods to strike an animal,” adding that “this may breach welfare legislation as well as agitating the animal”.

“The language and the body language of these workers with the animals is really not what you want to see,” said vet Paul Roger, chair of the UK-based Animal Welfare Science, Ethics and Law Veterinary Association. “That level of force is not acceptable. These are not the sort of standards you usually encounter in the dairy industry.”