meta Time robotic milking creates a host of new opportunities in Fermanagh :: The Bullvine - The Dairy Information You Want To Know When You Need It 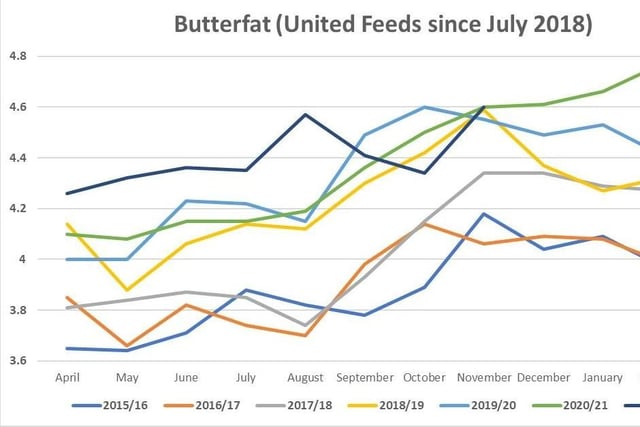 Here in Northern Ireland, approximately 40 farmers switched from another enterprise to dairy within the last 12 months with around 50% of these new entrants having committed to robotic milk production.

For many of these new entrants and others, going down the robot route allows them to milk up to 50 cows while still providing them with the opportunity to work off farm.

Such has been the process followed by Derygonnelly milk producer – Raymond Hassard who now milks a 50-strong herd of elite Holstein cows whilst also working as a joiner.

“The robot was installed six and a half years ago,” Raymond explained.

“Prior to that, I milked 30 cows through a byre and pipeline system.

“The farm is not large enough to provide me with a living. So, it became a case of change the milking system, or get rid of the cows.

“Going down the robotic road provided me with the opportunity to build up cow numbers to some extent, while also allowing me to work off farm.

“I have always been interested in cows. This being the case, I had always been milk recording and I committed to pedigree Holsteins a number of years ago. The herd prefix is Tully Farm.”

Although Raymond does not show, he sells a number of registered bulls to neighbouring dairy farmers on a regular basis. Embryo transfer has also played a part in building up the status of the herd.

The process of building and installation was done over a two-year period.

He explained: “After the design process was complete, the tank was dug and new shed constructed, which was built specifically to suit a robotic milking operation.

“The selection of the robot and getting it installed was relatively straightforward, relative to all the work required to get me to that stage and I chose to put in a DeLaval Voluntary Milking System (VMS).”

Raymond continued:“I rear all my own replacements. Over the years, I have bought in a selection of bloodlines from a number of top Holstein herds.”

“I try not to calve cows during the summer months,” Raymond further explained.

“The current calving index is in the region of 400 days. There is an automated heat detection linked to the robot. And it works well.

“Given the performance that I am getting from the cows, I am not pushing to bring the calving interval figure down. There is potential to get more milk from the cows however I am more than happy with current performance and herd health.”

Raymond inseminates all his cows with a selection of bulls that meet his own specific herd breeding needs.

“Having the DIY option allows me to pick and choose the bulls that I want. Sexed semen is used on both cows and heifers. In fact, I think I was one of the first milk producers in Northern Ireland to actively use sexed straws on mature cows.

“Going down this road means that I normally I have surplus heifers coming through. I am happy to sell a significant number of these on as dropped calves.”

Getting the nutrition of the cows right is a priority for Raymond. And in this context for almost four years he has worked closely with his United Feeds representative Clive Morrison and together their focus over that time has been on improving milk solids, herd health and 305 day yield.

Chart 1 & 2 show the milk quality results for the past six years with noticeable improvements since United Feeds got involved in July 2018.

Clive was a recent visitor to the Hassard farm.

He explained:“Raymond zero grazes the cows during the spring and summer months. Concentrates are offered courtesy of an out-of-parlour feeder, which is topped up to yield by the robot.

“There is no diet feeder on the farm and Raymond makes three cuts of silage annually.

“The cows are currently being fed United Feeds’ Dairy Deluxe 16 nut which is working extremely well with the current silage on offer.

“United Feeds has pioneered the reduction of total dietary protein being fed to dairy cows in order to improve fertility and improve sustainability while at the same time not impacting overall yield. Over the years this has proved successful on many herds including the Tully Herd here in Derrygonnelly.

“The Dairy Deluxe 16% protein nuts currently being fed on Raymond’s farm this winter, like all the rations fed here since United Feeds got involved in 2018 are based on United Feeds’ Cream Maker Technology. These rations, through a combination of digestible fibre and Bergafat protected fat are designed and proven to specifically promote butterfat, without compromising on yield or milk protein.

“We keep a close eye on feed rates and performance of the herd to ensure maximum efficiency is maintained at all times.”

Clive concluded:“The information on individual cow performance that is available from all robot milking systems and indeed many of the newer parlours’ software is excellent and at United Feeds we have great knowledge and experience within our team of how to get the best from each system.

“On Raymond Hassard’s farm specifically, the change to robotic milking has worked extremely well for him and alongside the improvements in his herd genetics getting the nutrition right is paying dividends in terms of milk yield, milk solids and herd health.”

For more information on how United Feeds can assist you with improving milk solids, herd health or feeding systems on your farm contact your local United Feeds representative.