meta The Texan big freeze: how has it impacted on the dairy and beef industries? :: The Bullvine - The Dairy Information You Want To Know When You Need It

The Texan big freeze: how has it impacted on the dairy and beef industries?

Texas is renowned for its arid regions and extensive cattle ranches, holding around 14% of the total cattle population of the US. However, the state has been affected by an extremely cold weather event in recent weeks. But what impact has this had on the largest beef producing state and the fifth largest state in terms of milk production?

Many of the mid-US states have been affected by colder temperatures in recent weeks. Texas has recorded some of thecoldest winter temperatures for more than three decades, with temperatures plunging to -18oc in some areas. Power grid failures due to high demand for electricity, resulted in millions left without power, as well water supplies being disrupted by frozen and damaged pipes. 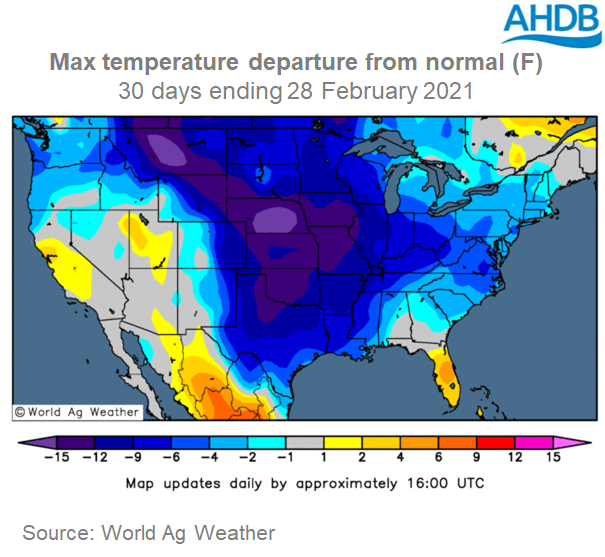 The extreme weather has posed serious challenges to both beef and dairy farmers in these regions. Even meeting basic welfare needs has been extremely challenging, with the conditions so cold that diesel turned to a useless gel. Producers have been opting to use petrol fuelled pick-up trucks to transport hay and bedding. Newborns are particularly vulnerable to cold shock.

The number of animals that have been lost to the adverse weather conditions is unclear at present. However, both milk production and daily growth rates will be affected by the weather as animals re-route energy into thermoregulation.

These power outages have also extended to industry, with both milk and meat processors affected. According to the Texas Agricultural Commissioner, dairies were dumping an estimated $8 million worth of milk daily due to power outages and staffing shortages. However, some cream was reportedly dispersed into the Midwest. Meanwhile, both meat processing plants and feed mills have also been forced to close due to both power outages, and snow affecting transportation links.

This disruption has also caused a ripple effect into retail, with retailers unable to secure shipments of fresh products, including meat and dairy.

At present, it is unclear the extent of the impact of this event on both beef and dairy industries. However, reports suggest that the disruption is likely to be valued in billions of dollars.