meta Lost At Sea – The Cows Who Will Not Be Coming Home :: The Bullvine - The Dairy Information You Want To Know When You Need It

Lost At Sea – The Cows Who Will Not Be Coming Home 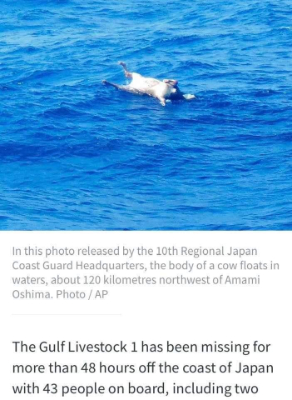 It strikes me as beyond absurd that dozens of dead New Zealand cows are now floating in the East China Sea. Last Wednesday 5,867 cows perished when the Gulf Livestock 1 capsized and sunk west of Amani Oshima in Japan.

If this does not wake us up to the pathological nature of our treatment of animals then nothing will.

The images in the media of bloated dead cows in a turquoise sea are desperately sad. Nobody meant for this to happen, least of all the cows, but it did. And since it did happen, we have an obligation to make sure it never happens again.

The only way to do this is through a complete ban on live animal export in New Zealand.

We must see this as not just a one-off tragic accident, but as an inherent risk of livestock shipping. It is one of the many concerns that this industry raises. Livestock ships are notoriously controversial due to the appalling conditions the animals must endure. The ships have been converted from cargo ships. They pack these animals like sardines on top of each other.

In New Zealand, the live export of animals for slaughter was banned in 2003 following the horrific deaths of 6000 sheep on a ship bound for Saudi Arabia. Despite this, a loophole exists whereby it is still legal to export these animals for breeding purposes. Ultimately the animals will be slaughtered in their new country. And they may be killed by methods deemed too cruel to be legal in New Zealand.

There is no guarantee that the animal welfare standards that we have in New Zealand for animals apply in the countries they are being shipped to. In 2019 hundreds of cows shipped to Sri Lanka from New Zealand and Australia died from disease and poor condition. Agriculture Minister Damian O’Connor then put livestock export under review due to undeniable suffering of animals and the impact it would have on New Zealand branding.

In 2020 there has been an increase in livestock exports from New Zealand, presumably to beat possible restrictions that might come in after the review is finalized.

To return to the cows lost at sea. There is absolutely no doubt that those cows suffered in the lead up and event of their drowning at sea. Packed into pens and in unfamiliar surroundings, and cramped conditions these cows stood no chance.

The drowning must have been a real-life horror story. As the ship pitched and lurched into the storm the cows would have been thrown around in their pens. When the ship capsized and sank they drowned – their nostrils and lungs filling with dank and cold sea water as they plummeted with the ship. To the depths of the ocean. To a watery grave. To their deaths.

Imagine it if you will. I’ve been able to do little else since I read about it.

And now they are popping up like bloated daisies in the East China Sea. It’s a far cry from the pictures of contented New Zealand cows in grassy paddocks that the dairy industry pedals to the world.

I personally think that what happened to those 5,867 cows is indefensible. And yet some of our political candidates and dairy farmers are now defending it. For example. the ACT party’s rural spokesperson and Northland dairy farmer, Mark Cameron, has said that it would be a mistake to ban livestock export because it has so many economic benefits.

Mark Cameron also said that emotion should not get in the way of any decision on whether to ban livestock export or not. Easy for him to say. He is not one of the 5,867 cows.

He is right in one sense. Emotions alone should not govern core decisions made about any serious issue. But emotions can and should help guide our decisions by shaping our thinking about what is fair. A sense of injustice for those cows is perfectly warranted given what they have endured.

In fact, as a thinking person I also have a lot of negative emotions about what happened to those cows, and I am sure this is true for many New Zealanders. I have got good reasons for those feelings – emotions are not isolated from our rationality. To suggest otherwise is foolish.

I don’t want to get into a discussion over the economic pros and cons of livestock export . It is merely an academic exercise in the wake of the significant suffering the animals endured. Nothing justifies it. Besides, I am pretty sure that someone is profiting somewhere or this would not be happening. But if profit is always the last word in any decision made then it is a sad indictment on our society.

Decisions must always be made not just on economics but also on fairness, justice and democratic processes. This has not happened with live animal export in New Zealand.

Now is the time to think deeply about whether live animal export is reflective of our core values in New Zealand. Because right now it is a mad world and one that we need to change. We are not (I hope) zombie – like robots committed to economic gain despite the cost to animals.

Because that would make us monsters.