meta Investors dump Fonterra shares :: The Bullvine - The Dairy Information You Want To Know When You Need It 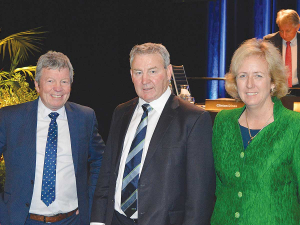 Fonterra’s poor performance is driving institutional investors away from the co-op.

And Fonterra Shareholders Fund chairman John Sherwin says the co-op needs to meet key milestones to regain investors’ confidence in it as an investment proposition.

The FSF annual meeting in Auckland last week heard that institution and private wealth holdings reduced over the 2019 financial year as the co-op struggled with some poor performing assets.

Sherwin says these investors were also waiting for greater clarity on Fonterra’s strategy and earnings outlook.

“While we have seen improved sentiment, Fonterra now needs to meet, and continue to meet, key milestones to regain confidence in it as an investment proposition,” Sherwin told about 100 unit and shareholders.

The drop in institutional investors, however, had little effect on the number of units issued by FSF:  102 million units were issued — 0.6 million less than the previous year

This was mostly due to Fonterra farmers buying more shares for two reasons; a situation described by Sherwin as “somewhat of a dichotomy”.

Fonterra farmers need one share for every kgMS they supply the co-op. Farmers who have reached the upper limit of non-supply backed Fonterra shares they can hold are purchasing shares and converting them to FSF units for future share compliance requirements.

“It appears that due to the historically low unit price, a number of these farmers have proactively acquired units which they will be able to transfer to shares when required,” said Sherwin.

Also, farmers who have ceased to supply Fonterra are converting their shares to units.

Sherwin says these farmers are in varying stages of the mandatory three-year sell down period of their Fonterra shares.

“However, not wanting to exit the co-op at the current price, they have opted to convert their shares to units.

“Some of these farmers would have only been required to sell the first third or second third of their shares.”

Sherwin says this is likely to be the primary driver of the increase in units issued to 111 million in late January. Also, some farmers may simply be choosing to hold units as they want to remain connected to the co-op.

Sherwin says while market sentiment has improved slightly, investors are keen to see how Fonterra’s new strategy will work.

“There are still many questions on what the business will look like in the future. And receiving greater detail on the strategy in FY20 will be instrumental in helping unit holders and farmers looking for more accountability.”

One shareholder, Robert Gray, noted that A2 Milk used to be “a penny dreadful” but now Fonterra exists in its shadow. He questioned why Fonterra has not taken the initiatives A2 Milk has taken.

“They have found themselves a fantastic position in the Chinese market and done pretty well as a result. There’s no point in looking back over that other than taking some learnings.”

He said Fonterra was now part of the A2 milk market.

Another unit holder asked why Tip Top was sold by Fonterra, and whether it was incurring a loss.

Hurrell says Tip Top was making a decent return on the investment, but it was “by and large a confectionary company”.

Shareholder Philip van der Waal questioned why the asset sale review did not include Australian assets.

Hurrell said the Australian business is very important and a lot of milk from NZ ends up there.

“A lot of milk is sent across to the Australian market. They produce a lot of our nutritional powders.”

Van der Waal called for a review of the milk price so that it’s fair to both farmer suppliers and unit holders.