meta Farmers’ naked photo shoot helps to close gate on the black dog of depression :: The Bullvine - The Dairy Information You Want To Know When You Need It 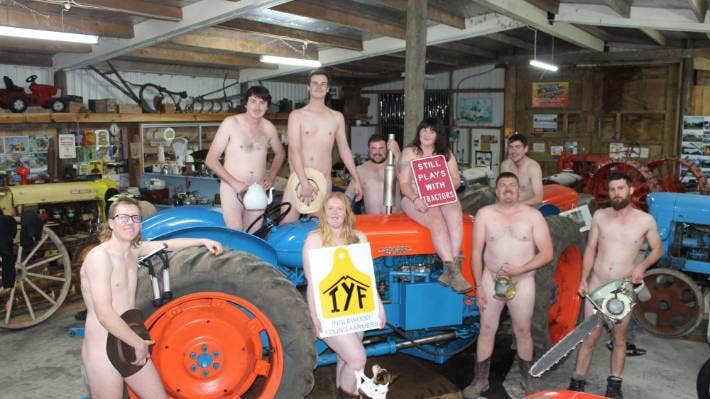 It was when a close relative said “I love you” as he headed off to work one morning that Taranaki diesel mechanic Josh Evershed​ realised something might not be quite right.

“It was out of the ordinary because he’d never said that sort of thing before to us,” Evershed said.

“It was a realisation to everyone close to him that he may have serious mental health [issues], and we needed to chase it up before it got worse.”

Steps were put in place to ease the relative’s workload, get his mind away from the farm, and go back to what he enjoyed doing, Evershed said.

Meanwhile, in July, Evershed and eight friends from the Inglewood Young Farmers’ Club posed naked for a national photo competition organised by Will To Live and Australian-based mental health awareness group, The Naked Farmer.

They recently learned they had won the $1500 first prize, which they plan to give to mental health charities.

Will To Live was started in 2018 by South Island farmer Elle Perriam who organised a national “Speak Up” tour to rural areas to raise rural mental health awareness in New Zealand after her partner took his own life.

Inglewood club members range in occupations, from mechanics to dairy farmers to car painters, and all have been connected with colleagues facing serious mental health issues in rural areas.

Evershed said his relative had struggled after buying his first farm.

“He had finally got his dream and it was crashing down around him after six months.

“The s… was hitting the fan around the farm. It was a very wet winter, the payout was down and he was struggling to cope.

“There were mornings when he would take a two-hour shower because he couldn’t face going out to farm.”

Club treasurer Kenzie​ Bellringer said: “As a club we support raising awareness around rural mental health because we’ve all been connected to it in some way through friends and colleagues.

“We’re lucky we don’t hear more about it because it won’t go away but more and more the awareness about it is becoming wider known.

“There are all sorts of pressures which come from working in isolation, and being a tough Kiwi bloke who doesn’t readily share feelings with anyone.

“There was an era when you were told to harden up and take a concrete pill if things weren’t working out on the farm.

“Now people are more aware of depression and will talk about it more openly.”