meta Canadian Politics: SUPPLY MANAGEMENT MADE THE DIFFERENCE :: The Bullvine - The Dairy Information You Want To Know When You Need It

I didn’t see all the rounds of voting for the new leader of the Conservative Party of Canada, but my ears did ring to attention when the subject of supply management was discussed by the election night panel.  “It affects only 11%.”  That phrase and the notion that it was too small a portion of the electorate to be an election game changer went by very quickly. I remember thinking. “Yes, it’s a small group.  But there are so many others affected by that small group.

Food Chain Lingo Should Not Be Disparaged

“From Farm to Fork” and “From Stable to Table” are popular lingo used in support of the good chain. When analysts decide the group is too small to have national, or political, significance they are writing off a much larger group than just the primary providers. From the stable to the table applies to all the suppliers, consultants, financial institutions, truckers and grocery stores that make a portion of their living from the sustainability of the dairy industry.  And that’s not to mention consumers.  Too often that silent majority also gets overlooked in the hoopla of election forecasting and numbers analysis.

Who is Andrew Scheer?  Why Does He Care About Supply Management?

On May 27th, Andrew Scheer, Regina-Qu’Appelle MP, became the new leader of the Conservative Party of Canada. He pulled ahead of Maxime Bernier to win.  Once again, the modern day election results of “By a slim margin” came into play. A CBC article quoted Franck Groeneweg, a grain farmer from Edgeley, Saskatchewan as saying “It was a nail-biter to the end.”  Hindsight being 20/20 political pundits are now saying that Scheer seemed to have the support of many (dairy) producers” and that made the difference.

The Rural Vote Rallied Around Scheer 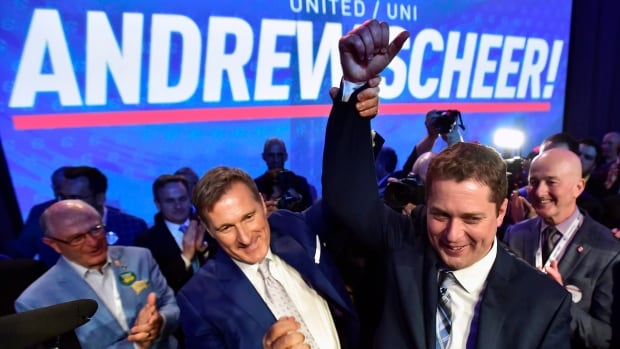 Election platforms come and go and sometimes the ones that win never get put into action, but Andrew Scheer voiced support for supply management and for abolishing Prime Minister Trudeau’s carbon tax.  Rural voters took notice of what he claimed and also were not as supportive of Maxime Bernier’s statements that he wanted to abolish supply management.  Thus the expected winner became the election-night loser.

Who Likes Him Now?

The Dairy Farmers of Canada (DFC) also proclaimed its support for the new leader in a congratulatory post.

“Dairy Farmers of Canada would like to congratulate Andrew Scheer on his win in the Conservative leadership race,” says the DFC post.  “Mr. Scheer was supportive of supply management as a Member of Parliament, and has continued to be supportive throughout this leadership campaign; on behalf of all Canadian dairy farmers – thank you!”

It hasn’t been that long since we wrote about the turmoil, rural interests are causing for US President Trump (Read more: Trump Fabricates False Dairy War with Canada – US Dairy Farmers Stuck Paying the Price). Whenever two or more people gather together to solve the problems of the world, you can be sure that Trump’s position on NAFTA, supply management and Canadian impact on Wisconsin dairy farmers, will be a hot topic. It isn’t surprising then that the Conservative Party had to choose who they felt was ready for that challenge on top of putting their agenda in the forefront of Prime Minister Justin Trudeau’s government.

The Winner Had a Farm Strategy

Over the coming months, there may be many who try to determine how someone from a smaller province like Saskatchewan can rise to political prominence or even become Prime Minister.  As Scheer himself put it in an interview, “John Diefenbaker did it.” and he obviously has his eye on the prize. Ag supporters noted that, throughout the campaign, he valued the needs of farmers.  He campaigned in Quebec where he met directly with dairy farmers and earned the support of many of them. His strategy worked, and now he will be using those insights to power his opposition in Parliament.

So Who’s TOO SMALL Now?

We all love to read statistics that confirm that our position – political or otherwise – is the most popular.  I know I’m not the only one who is wondering why election polls seem to be missing the mark more and more often these days.

I think pollsters are asking the wrong questions of the wrong people.  They are so immersed in the take and take of traditional politics that they are missing the shifting mood of the times.  No one would ever call election campaigning and international politics as “normal, ” but we keep trying to look at modern issues through the distortion of the past.  Bluster, bravado, and name-calling have risen to new heights.  In the real world, there are many who don’t conduct themselves this way.  Nevertheless, they want their position to be acknowledged on the world stage.  That’s when what they would do themselves is sublimated, and they vote for the candidate who can get the job done.  If they think it takes bluster, they mark the “X” for that manner of candidate. If they are against smooth, big money politics, they put their vote where the candidate doesn’t spout those values. It doesn’t make a huge number to make the winning difference in an election. Twenty-five percent of the population is a landslide in most modern elections. Winning agricultural support is not often considered a mainstream election platform. Yet it is a good strategy when it brings out the passionate group who is ready to challenge mass production, mass advertising and mass conformance to money issues. The average voter – him or her— are ready to take the unlikely route when choosing who best represents what satisfies their average needs. That’s where majority wins are made.

Speak Up and Stand Up for Agriculture

There are so many times when headlines regarding agriculture broadcast the negative (Read more: Country vs. City – Bullying, Rejection, and a Total Lack of Understanding). It is refreshing to see a high-profile opportunity to celebrate the positive values of producing healthy food products. The challenge for Andrew Scheer will be where he goes with this foundation of support.  He saw the sector and recognized that they wanted their voice heard.

It wasn’t a landslide victory for Andrew Scheer, but many analysts feel his insight into supply management did make a difference!  Now let’s see if he will continue to do so on Parliament Hill.

4-H Canada's Volunteer of the Year - John Drummond “A Passion for the Program”
12 Lessons You Can Only Learn From Growing Up On A Dairy Farm!
High Heels and Work Boots – You are what you wear!