meta Why the dairy industry will struggle to meet the EU’s organic targets :: The Bullvine - The Dairy Information You Want To Know When You Need It

The EU Farm to Fork (F2F) strategy is part of the Green Deal and provides a high-level ambition for the EU food ecosystem.

While many goals in the F2F strategy impact the dairy sector, the target to have at least 25% of all farmland under organic farming in 2030 particularly catches the eye. Although the dairy sector is an important user of agricultural land, only 4% of the current dairy herd is organic.

Major dairy companies have yet to embrace the organic target, encompassing a large shift of supply and demand. Proposed policy measures in the F2F tend to focus on developing supply, implying it’s mainly up to dairy companies and retailers to stimulate demand for organic products. This only works if consumers are willing to pay a premium or if the EU compensates dairy farmers for their additional efforts.

1 Support from EU countries and the (dairy) sector

From the beginning, the F2F strategy has received mixed support from farmers, industry organisations and agricultural ministers due to concerns over farm income, competitiveness and food security. The organic target receives mixed support within the dairy sector because it could offset earlier progress on lowering CO2 emissions and land use.

Changing food systems requires the integral support of several departments such as agriculture, health and the environment and an interlinked set of measures at the national and European level. However, the discussion on the reform of the Common Agricultural Policy budget shows the difficulties of redirecting EU funds from conventional farming practices towards those which are more linked to sustainability.

While the number of organic dairy farmers is growing, transition-related costs and risks are a major hurdle for more farmers to follow suit. If society expects farmers to change tack, the bill for their extra efforts must be paid by someone in the end.

4 Creating consumer awareness and willingness to pay a premium

It will take continued effort from companies and policymakers to ensure consumers value sustainability-related efforts made in agriculture. Currently, only one in five EU consumers is willing to spend more on sustainable food, according to a survey by BEUC – the European consumer organisation. On top of that, limited demand for organic dairy in the export and commodity markets is a bottleneck because that’s where many dairy companies are earning a large share of their revenue.

Many of the targets in the F2F and related policy proposals impact the dairy sector. But the one that probably has the biggest economic impact is the target to use at least 25% of total farmland for organic farming by 2030. It’s also a complex target to reach because it involves commitment from every stakeholder in the value chain. While it’s the first time such a quantitative target has been set, the interest in organic is not new.

For example, the first EU action plan on organic dates back to 2004 and the EU organic sector in general. The organic dairy sector, in particular, has been growing over the past two decades.

25% organic farmland, an ambition but no hard target

It is worth noting that the 25% organic target is set for all EU farmland, and it seems highly unlikely that there will be a specific target for dairy farming. Still, the dairy sector is an important agricultural land user for grazing livestock and the production of feed crops. Given that around 4% of all the dairy cows in the EU were organic in 2019, it’s clear that the sector will have to think about how it can contribute.

EU officials like vice-president Frans Timmermans and Agricultural commissioner Janusz Wojciechowski have indicated that the 25% is an EU average and that every country is supposed to go the extra mile regardless of their current share. What’s also clear from the outset is that if agricultural heavyweights such as Germany, France and Spain remain far from the intended target, it will be quite impossible to reach.

The organic dairy herd is relatively small in most EU countries 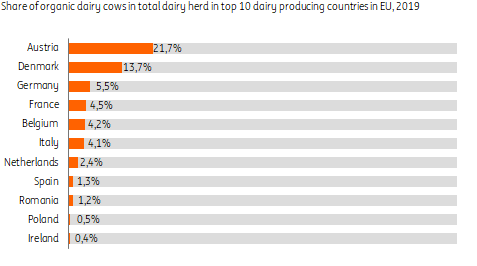 There are big differences between EU countries as far as organic production in the dairy sector’s concerned. Austria is the frontrunner as almost a quarter (22%) of the dairy herd is organic. In major dairy-producing countries like Germany, France and the Netherlands, the share lies between 2.5% to 5.5%.

Although the organic share in the EU dairy herd has been growing from 2012 to 2019 (Compound Annual Growth Rate: 6.7%), a simple continuation of that growth rate wouldn’t be sufficient. In that case, the share would end up around 8% in 2030, nowhere near the Farm to Fork ambition.

Reaching the target involves every part of the value chain

To support the growth of the organic market, every stage from farm to fork is important.

The share of organic farmland will only increase when there are farmers who want to produce, dairy companies that are able to process the milk and create added value, retailers and caterers who see opportunities to market these products and consumers who are willing to pay a bit extra.

While the F2F strategy proposes measures that can influence everyone involved here, they tend to lean more heavily on influencing the supply side and less on demand related measures. This can prove difficult as a balanced development of both supply and demand is needed.

EU projections show a slight decrease in the dairy herd this decade. With that in mind, assuming a 25% share for organic in the dairy herd means the number of organic dairy cows would have to multiply by almost six to around four million in 2030. We estimate more than 100,000 dairy farmers would have to convert from conventional to organic farming in such a scenario. There is definitely interest among dairy farmers to make this step, but the transition period of at least two years and uncertainty about future organic milk prices also pose additional risks for farmers.

Once converted, the financial perspective can become more attractive because organic milk trades at a premium. In Germany, this premium was on average 15 cents per litre in the last five years and in Austria eight cents per litre. Whether this premium is enough to compensate for lower milk production on organic farms (on average more than 20% lower) and a higher cost price per litre differs from farm to farm. 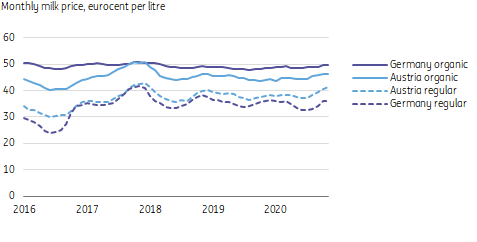 Dairy companies need to have balanced supply and demand growth

The EU Green Deal and F2F have far-reaching implications for dairy companies. While the reduction of CO2 emissions has become an explicit target in the sustainability strategy of major dairy companies, increasing organic production is often not yet, at least,  part of this strategy. Still, dairy companies play a decisive role in the development of the market. Dairy companies actively coordinate the supply of regular, organic and other added value milk (such as genetically modified or GMO-free), and some have been making a foray into plant-based drinks.

Simultaneously, they can stimulate demand either individually or in coordination with retailers and food service clients. The challenge lies in making sure the supply of organic milk is in line with demand. Higher cost prices can be successfully passed on to customers to ensure a profitable business model for themselves and associated farmers.

While total dairy supply in the EU is expected to grow towards 2030, an acceleration of organic farming could hamper this trend. And that, in turn, could put pressure on the capacity utilisation at dairy processing plants.

Retailers acknowledge the need for greening their supply chains but are also wary of losing price-sensitive customers to competitors. General sales of organic products in the EU reached 41.4 billion EUR in 2019, and conventional supermarkets have introduced more branded and private label organic products across all categories.

An assessment of fifteen major EU retailers shows that more than half of them have earmarked organic as an important element within their sustainability strategy. However, our analysis also finds that hard targets on sales of organic products are uncommon. Given the prominent position of retailers towards European consumers, it would boost the F2F goals when retailers finally incorporate these targets into their sustainability strategy. However, it remains uncertain whether this will happen without more directive policies.

The Farm to Fork strategy in a nutshell

In May 2020, the EU Commission presented the Farm to Fork Strategy for a fair, healthy and environmentally-friendly food ecosystem. The Commission charts an ambitious course in which longer-term sustainability gains are favoured over short-term productivity gains in the strategy. The strategy includes promoting organic farming and reducing nutrient loss, use of antimicrobials and pesticides in agriculture towards 2030, plus a set of broader policy actions.

While the ‘what’ is clear, the ‘how’ is still a topic of fierce debate in Brussels. Due to concerns about farmers’ income, competitiveness and food security, it’s not clear how much support the Commission will get from the European Parliament and the member states to effectively carry out the F2F strategy.