meta Why Indian dairy giants fear disruption from New Zealand companies :: The Bullvine - The Dairy Information You Want To Know When You Need It

India’s top dairy giants, from Amul and Hatsun Agro to Mother Dairy, have got into a defensive huddle, apprehensive that New Zealand’s smaller milk makers may soon disrupt domestic prices by exporting their produce here.

Discussions on a free trade agreement (FTA) with milk-producing countries such as New Zealand and Australia under the proposed Regional Comprehensive Economic Partnership (RCEP) may open up India’s sprawling dairy sector to foreign players from these countries.

India may be the largest producer of milk globally, but all of it is consumed by its huge population. “Around 40% of India’s milk is consumed in villages. One third of the surplus comes to the organised sector and the rest goes to the unorganised sector,” said R S Sodhi, MD of Amul.

In comparison, New Zealand, which is the world’s seventh largest milk producer, exports 90% of its dairy because its population of 42 lakh people is too tiny to sustain demand. Indian cooperatives and private companies fear that even if one-fifth of New Zealand’s dairy exports reaches Indian shores, domestic companies will be forced to reduce prices. 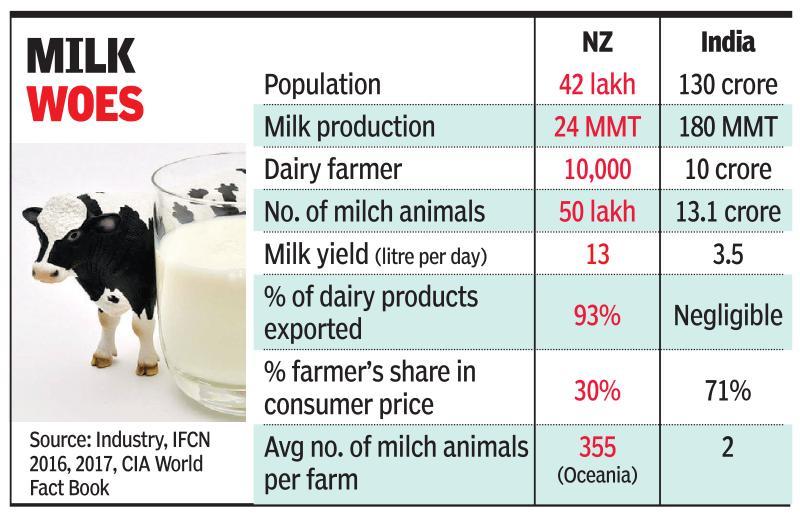 “New Zealand is selling milk powder at Rs 160 per kg. We are selling it at Rs 280 per kg. To make 1 kg of powder, we need 10.5 litres of milk. So, tomorrow, if they come to India with such low prices, why will other companies buy milk from us,” said Sodhi.

Cooperatives and private dairy companies in India buy milk from small farmers at around Rs 31 per litre. With NZ’s proposed entry into the sector, that amount could plummet by Rs 10, warned industry experts.

“Farmers will be devastated. Agriculture accounts for around12% of India’s GDP and a major portion of that is from milk. Milk provides liquidity to farmers for their day-to-day needs,” said R G Chandramogan, MD of India’s largest private dairy, Hatsun Agro.

Value of milk output for 2016-17 was Rs 6.14 lakh crore at current prices, which was higher than combined value of paddy and wheat and sugarcane, according to data from NDDB (Mother Dairy).

“Any decision to reduce the tariff barrier would encourage import of cheap milk powder in the country. Our country will be pushed into a state of import dependence, jeopardising our nutritional security as is the case in many Asian, particularly, South Asian and South East and Far East Asian countries,” said NDDB chairman Dilip Rath.

While domestic dairy companies argued that India is self-sufficient in dairy, with milk production in the country having increased with a CAGR of more than 6.5% in the last five years, New Zealand dairy farmers have a different opinion.

“In India, local dairy demand is outpacing dairy supply and some analysts have estimated that by 2025 India will represent 39% of the world’s dairy consumption. We believe that there is a role for New Zealand dairy exporters in India alongside domestic processors. Our diversified product offerings also allow us the ability to play a complementary role in helping to meet India’s dairy demand like exporting proteins, advanced ingredients for sports & active and medical nutrition applications,” said Kimberly Crewther, executive director, Dairy Companies Association of New Zealand (DCANZ).

“New Zealand’s milk production is highly constrained due to a number of factors, including our geographic size and commitment to farming within environmental limits. This means that New Zealand production is unlikely to grow significantly from current levels in the future,” Crewther added.