meta White County (IL) bids farewell to its last dairy farm :: The Bullvine - The Dairy Information You Want To Know When You Need It 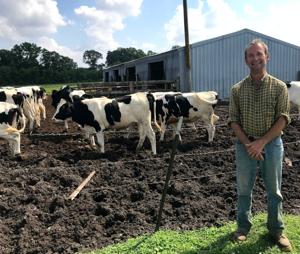 The last dairy farm in White County has squeezed its last drop of milk and dispersed its milking herd in preparation for retirement.

Reiff Farm started in 1870 and has been passed down six generations.

Howie Reiff, 64, grew up in the same house in which he currently lives in Burnettsville, where he raised cows with his father, a fifth-generation farmer.

“I’ve milked cows ever since I was big enough to handle the milkers,” Reiff said.

Reiff decided to prepare for the “dairyman’s retirement” over a year ago. Early last week, he sold the remainder of his milking cows at the Topeka Livestock Auction.

Reiff’s wife, Cheryl, explained in a Facebook post that the farm will still have a few black and white critters for the next 18 months or so. The remaining cows are all heifers, female cows that have not yet birthed a calf.

The cows will remain at Reiff Farm until their first birth. After that, they will be milked for five days to provide colostrum to the calves. Once all the heifers deliver a calf, Reiff Farms will simply be a harvest farm with corn, soy and hay.

Dairy farming across the nation is declining quickly, Reiff said. In the past five years, drinking milk has been produced at capacity. This results in low income for the dairy farmers as producers do not have to pay much to receive the milk.

At Reiff Farm’s peak, about six years ago, they had a two-man workforce — Howie and his brother-in-law, Glen McCracken, with roughly 115 cows to feed and milk. Reiff said he is proud to have been the last milking operation in White County — and he is going out by choice.

Several dairy farms have gone out of business due to outside factors such as bankruptcy, poor economic conditions, a lack of land or other uncontrollable factors. Reiff managed to defeat these obstacles, he said, giving him the opportunity to stop on his own time.

Howie and Cheryl’s four children — Grant, Harrison, Brittainy and Taylor — have all shown great pride to the family farm through Facebook posts and gestures to their parents. A theme within their message, “winners drink milk.”

Grant Reiff said in his June 11 Facebook post, “I’ll celebrate my 35th birthday on Friday, and it’s so sad to think that when I was born, there were 31 dairies in White County. By the time I turn 35 there will be ZERO!”

The children suggest that growing up on a dairy farm is crucial to who they are now as adults.

“I was once told by a business executive that the most qualifying experience on a resume that you could have for any job is dairy farming,” Taylor Reiff said. “They know that if they hire you, they will have just hired the hardest working individual in the company.”

Dairy farming was more than a career for the Reiff family; it was a lifestyle, Harrison Reiff said.

“We learned that life is gonna kick you and might even crap on you from time to time, but it is how you respond to that and move forward from those experiences that will help define you,” he said.

Since selling the remainder of the dairy cows, Howie Reiff is adjusting to the “dairyman’s retirement.” According to Cheryl, this means going from an 80-hour work week to a 50-hour work week. Those 30 extra hours will allow Reiff more time with family and friends.

On the day the Reiffs sold the rest of their dairy livestock and returned to their car, the two had no idea what to do with their free time, they said.

With no rush to return home for milking, the couple visited friends who had set them up on a blind date 38 years ago.

The following morning, Howie was able to sleep in until 6:30 a.m., an unusual experience for a farmer who was accustomed to rising at 4:30 a.m. for milking.

He still tends to the remaining cows but looks forward to more time with family and old hobbies such as playing the keyboard.

As for the remaining heifers, they will stay on the Reiff property until they are ready to be sold as dairy cows to other farms. The milking corridors are “scary silent,” Howie said, but family members can already see the weight lifted off his shoulders.

“He just has more color and more life to him already,” Harrison said.

Cheryl and Howie are spending more time with one another now than they have in the past 36 years, and, they’re still married even with the added time, Howie joked.

The two will continue working — Cheryl is a teacher at Logansport High School and Howie harvests the farm crops. Full-time retirement is not arranged for the couple at this moment in time.

The last dairy farm in White County has officially seen its last days. And, though the decline in the industry is shaping other dairy farms across the nation, the Reiff family considers their time in the business a success.