meta What’s the average number of days a cow spends in milk? :: The Bullvine - The Dairy Information You Want To Know When You Need It

What’s the average number of days a cow spends in milk?

The number of days a cow spends in milk affects how much milk it produces in a season, and long term shifts across the whole herd will influence national production.

Over the last ten years, the trend has generally been an increasing number of days in milk[1]. There were some bigger swings in the 2010-2015 period and relative calm in the latter part of the decade. As of the 12 months ending June 2021, the average days in milk was 314.3 using Kingshay data, and 315.0 using Promar data. This is up from about 310-311 days in milk ten years before. Changing farm practices could account for this. 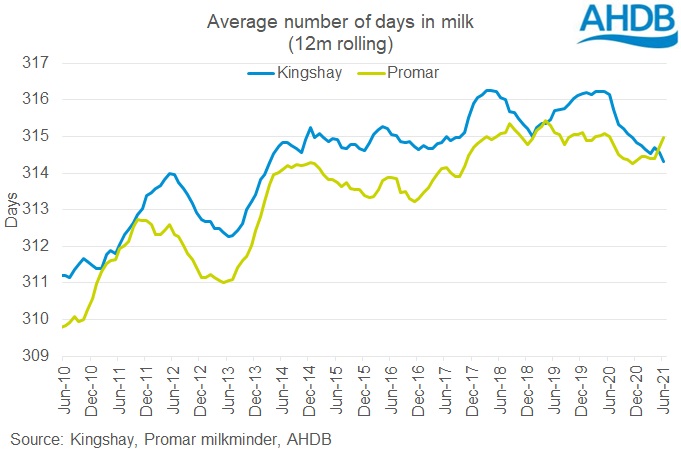 Our estimates based on Kingshay data have been trending downwards since June 2020. Efforts to curb milk production are likely to have played a role in this, as drying cows off earlier is one way to achieve lower production. As the data uses a twelve month rolling average, it will impact the figures for a while after the initial period of action is over. However, our estimates based on the Promar data have a much less decisive trend. Although there is also a dip from June 2020, it is less steep and has since recovered. This difference between the two will be down to the specific mix of farms included in each company’s datasets.

How much does this impact milk production?

We discussed this topic at the latest Milk Forecasting Forum. It was mentioned that another thing that might influence the average days in milk is the calving system a farm is using. For a block calving farm, in order to maintain a strict block, cows would need to be dried off on schedule. The average days in milk for a block calving farm would, theoretically be around 305 days. As this is lower than the current overall average, a substantial shift to block calving, would drop the average days in milk, and may impact production. However, it was also noted that for all-year-round herds, improvements in conception rates will mean cows getting back into calf sooner, and therefore being dried off sooner. At the moment, there are far more AYR herds than block herds in GB.

If we add GB milk production to the graph, we can see that there is correlation between production and days in milk – though it is weaker in more recent years. This implies that it is a factor to consider, but not the only one. This will be true at both the national and farm level. 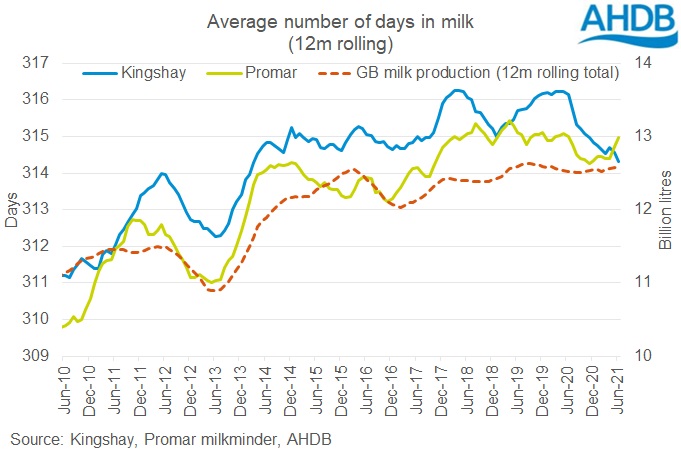