meta Vegan protesters storm ETHICAL supermarket for selling meat and dairy :: The Bullvine - The Dairy Information You Want To Know When You Need It 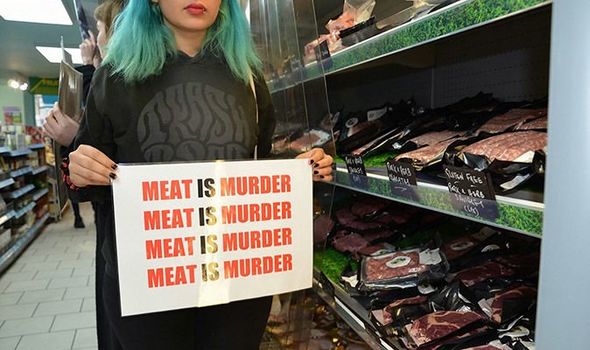 HISBE in Brighton, East Sussex, prides itself on selling “thoughtfully sourced from small, local producers and brands that trade responsibly, fairly and sustainably”. HISBE, which stands for ‘How It Should Be’, works with farms who treat animals with care and respect, and only sells locally sourced and free range produce. But that didn’t stop activists from Direct Action Everywhere (DxE), who attempted to intimidate staff and customers in the York Place store when they recited slogans from the vegan manifesto with the use of megaphones.

About 30 protesters lined the aisles and stood outside holding signs with messages such as ‘local doesn’t mean ethical’.

Another poster inside the shop read ‘Animals’ lives are their right. Killing them is violent and unjust, no matter how it’s done’.

The mob of angry vegans accused the business of “unethical” practices and “false advertising” because it claims to sell “happy” meat, eggs and milk.

According to one protester, the “whole ‘happy’ exploitation movement is not baby steps, they are big steps in a seriously backward direction”.

Another activist said: “‘Free range’ and ‘local’ are labels that make people feel more comfortable about animal exploitation and murder. But there is nothing ethical about farming and killing animals, there’s no such thing as ‘happy’ meat, milk or eggs.

“Animals are not products and using them for our greed and appetite is unethical and irresponsible.”

Ruth Anslow, who owns HISBE, said the group’s demonstration raised “an interesting clash in ideologies” but that their statements were “completely false”.

“We are committed to ethics-led sourcing and, to us, this means we sell local and high-welfare meat, eggs and dairy products.

“On the other hand you have these vegan activists, who think that it is morally wrong for HISBE to sell animal products, full stop.

“To the vegan activists, slaughtering an animal for food is the same as murdering a person – it’s irrelevant to them how the animal lived its life if that life is ended prematurely.

“We thoroughly disagree with this because of the vast difference between the living conditions on factory farms vs small high-welfare farms like ours.”

HISBE had originally allowed the activists promote their message as “everyone has the right to demonstrate” but the East Sussex shop “won’t be doing that again because they were shouting through megaphones and some of our staff and customers felt intimidated” after having been assured that the demo would be “peaceful”.

Ms Anslow claimed it is the second time her shop has been targeted by animal rights activists.

It added that “protesters will be back”.