meta Up to 100,000 sheep killed in Kangaroo Island fires, as farmers tally livestock losses :: The Bullvine - The Dairy Information You Want To Know When You Need It

Up to 100,000 sheep killed in Kangaroo Island fires, as farmers tally livestock losses 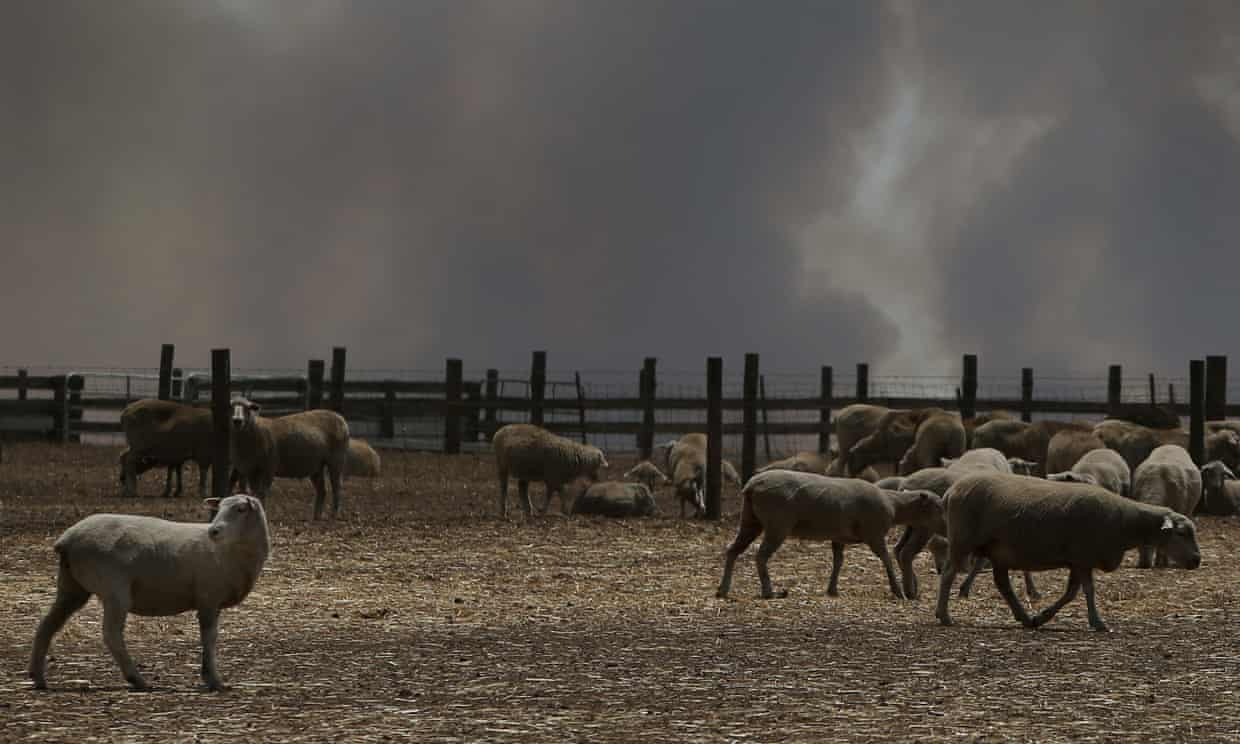 Up to 100,000 sheep were killed in bushfires on Kangaroo Island and at least 25,000 more livestock perished in fires on mainland Australia, farming groups have said.

Kangaroo Island farmers ordered thousands of rounds of ammunition to shoot animals that were critically injured in a catastrophic bushfire that has burned through half of the island’s landmass, devastating a significant koala population and thousands of other wildlife and killing up to one-sixth of the sheep population.

“A gun dealer was told to get as much ammunition as he could to shoot sheep and wildlife,” said Kevin Butler, the founder and president of the volunteer rural bushfire recovery organisation BlazeAid. “He left [mainland SA] with 50,000 rounds and he ran out of ammunition.

BlazeAid has volunteers standing by to go to Kangaroo Island, once the fire, which is still flaring up, has been declared safe. It organises between 20,000 and 100,000 volunteers nationally to help farmers replace fencing and other infrastructure.

Similar volunteer camps will be set up in East Gippsland, and north-east Victoria, southern New South Wales and other regions hit by the New Year’s Eve fires. Eighteen other camps have already been established to help rebuild after earlier fires in the Adelaide Hills and northern NSW.

“I have got farmers ringing up now that have just walked in with a rifle from shooting sheep,” Butler said. “If we don’t get help in there quick, something bad is going to happen.”

Butler said he needs more volunteers and more donations to cope with demand.

The Kangaroo Island mayor, Michael Pengilly, said the exact number of sheep killed had not been counted, but “I don’t think there’s any doubt that we have probably lost 100,000 sheep”.

The cattle population fared better, but some were still found burned.

Pengilly said ammunition ran low in the days immediately following the fire, but the department of primary industries helped ensure animals were euthanised in a timely manner.

There were between 600,000 and 700,000 merino and crossbred sheep on Kangaroo Island. Some farmers lost their entire flock when the fire flared up on 2 and 3 January.

“I know one bloke who is my age, he lost every head of sheep on the place,” Pengilly said. “He lost 9,000. And that is pretty common.”

Pengilly said he feels guilty that his own farm did not burn.

At least 13,120 head of livestock have been euthanised or confirmed dead as a result of bushfires in NSW, the NSW Farmers Association said. Early estimates from Victoria are for a similar number of losses, but both figures are expected to rise.

The oyster industry is also facing losses due to water quality and transport issues and the horticultural industry is still assessing the level of damage to orchards.

About 10,500 tonnes of fodder has been distributed to farmers in fire-affected areas, including dairy farmers on the south coast.

Much of that fodder was sent from Victoria, where the Victorian Farmers Federation (VFF) has begun a fodder drive to support farmers in East Gippsland and the upper Murray region.

“The generosity of some of our people who are in drought themselves and have offered to send fodder from all over the state is amazing,” the NSW Farmers Association president, James Jackson, said. “There’s a real community and a unity of purpose if you like. These crises bring out the best in people.”

That included dairy farmers in the southern highlands who clubbed together to donate $1m to the bushfire effort, and a schoolgirl in Victoria who raised $500 from a cake stall and donated the proceeds to the VFF’s fodder fund.