meta Two Tools to Reduce Calving Difficulties in Your Herd :: The Bullvine - The Dairy Information You Want To Know When You Need It

Two Tools to Reduce Calving Difficulties in Your Herd

Difficult calvings are costly to dairy producers. Not only do they often impact the dam’s subsequent production ability and health but they can also negatively affect the growth, health and survival of the newborn calf. First time calvers and smaller cows are at highest risk of having a difficult calving so producers tend to pay special attention when selecting a sire to mate them. Today, with the widespread use of genomics and the availability of sexed semen, Canadian producers have two tools to help reduce the incidence of calving difficulties in their herd.

As part of the genetic evaluation services offered by Canadian Dairy Network (CDN), each sire receives an evaluation for both Calving Ease and Calf Survival. These are combined together into an index named Calving Ability, which is often a key trait of interest when selecting mating sires for heifers. Daughter Calving Ability is a similar trait but reflects the ability of each sire’s daughters to calve easily and produce calves born alive. Prior to genomics, the only reliable way to identify “Calving Ease” sires was to wait for them to have a progeny-based proof following the birth of several progeny, both male and female. With the adoption of genomics, all young bulls in A.I. now have a genomic evaluation for Calving Ability so this trait can be used to select mating sires to avoid calving problems nine months later.

In a recent analysis, CDN examined how well these genomic assessments predict the eventual progeny-based proof. A group of 461 A.I. genomic young bulls born in 2013 or 2014 were included and their evaluation for Calving Ability as a young bull was compared to the official progeny proof of December 2017. Table 1 shows that the average evaluation for these bulls was consistent at 104 regardless of whether they were simple Parent Averages, Genomic Parent Averages or official progeny proofs after accounting for the annual genetic base updates. The fact that this average is 104 means that A.I. organizations are selecting more “calving ease” sires to purchase rather than simply looking for breed average bulls at 100.  Genomics, however, resulted in an increase of 39% in the average Reliability, moving from 31% for Parent Average to 70% for Genomic Parent Average. Once progeny proven, these bulls increased another 19% to an average Reliability of 89%.  Without genomics, Parent Average values had a correlation of 52% with the eventual progeny proof but genomics increased this relationship significantly to 74% (Table 1).

Looking closer at how well genomics identified superior bulls for Calving Ability, the Genomic Parent Averages correctly predicted 88% of the bulls that ended up with an official progeny proof with a rating of 100 (breed average) or higher and also correctly identified 85% of the bulls expected to be below breed average (Table 2). In terms of predicting the highest ranking sires for Calving Ability, with a rating of 105 or higher, the genomic evaluations correctly identified 61% of them (i.e.: 111/182) as shown by the shaded corner in Table 2.

As sexed semen technology continues to develop and improve, especially in terms of the negative impact of conception rates, the use of sexed semen steadily increases.  In addition, the combined use of sexed semen and genomic testing of females is a herd management strategy being adopted by more dairy producers.  The primary goal of using sexed semen is to increase the percentage of heifer calves born on the farm, from the usual 50% to over 90%. A secondary benefit of the fact that more heifer calves are born is the associated reduction in calving difficulties. Figure 1 shows the percentage of calvings from heifers that are expected to be “Unassisted” or “Easy Pull” depending on the Calving Ability evaluation of the calf’s sire. 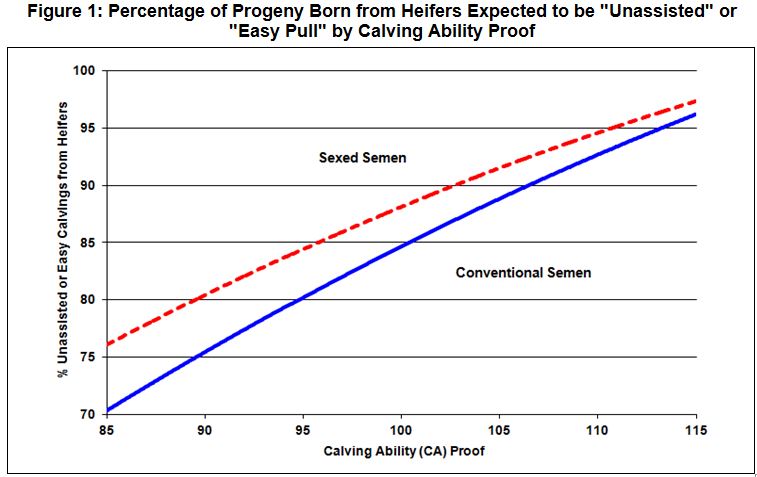 In general, a sire with a Calving Ability rating of 100 is expected to have 85% of their progeny born from first calf heifers without any problem at calving. The percentage of “Unassisted” or “Easy Pull” calvings increases to over 93% for sire’s rated 110 or higher.  These expectations are associated with the use of conventional semen, whereby 50% of the progeny born are expected to be males. As shown by the dashed line in Figure 1, calving problems can be reduced further by the use of sexed semen. For an average bull with a Calving Ability of 100, the use of sexed semen reduces the expected degree of calving problems from 15% to 12%. The benefit of sexed semen is amplified for sires that are below average for Calving Ability while this advantage is lessened for sires that are already highly rated for this trait (Figure 1).

Producing healthy herd replacements is an important component of profitable dairy farms. The calving process plays an important role in terms of the number of calves born alive and the ability of the dam to have the best possible start to her subsequent lactation and reproductive cycling.  For this reason, dairy producers have always paid special attention when mating heifers and smaller cows in an effort to reduce the likelihood of calving difficulties nine months later. With semen from genomic young bulls now representing 70% of the market share, genomic evaluations for Calving Ability can be used as an improved tool for identifying “Calving Ease” sires compared to what was previously possible based only on Parent Average values.  In addition, the growing popularity of sexed semen in the market place also provides a second tool to reduce the incidence of calving problems in your herd.