meta Trump’s trade war is hurting the dairy industry :: The Bullvine - The Dairy Information You Want To Know When You Need It 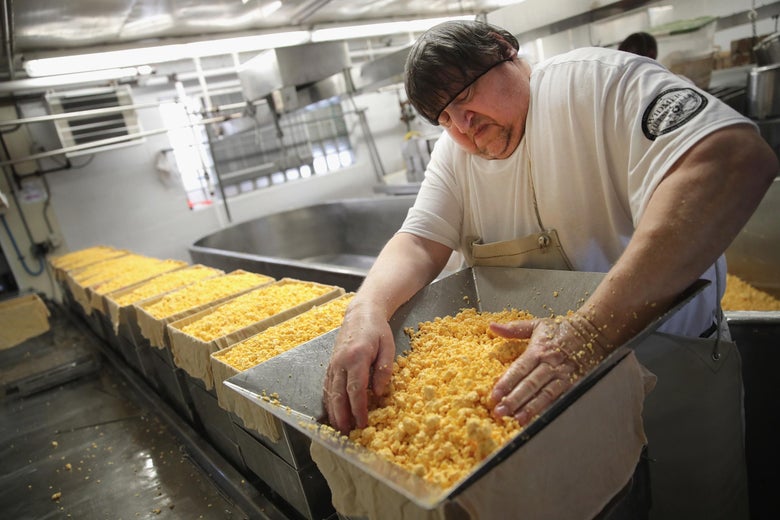 A man packing cheese curds into blocks in Wisconsin.

Donald Trump talks a lot about America’s dairy industry. Specifically, he likes to go on about how Canada’s tariffs on milk products put our farmers at a disadvantage. This appears to be his main rhetorical justification for starting a small, but diplomatically bruising, trade skirmish with our northern neighbor, which has led to new tariffs on both sides of the border. For instance, you may remember:

It’s a little ironic, then, that America’s milk and cheese producers are becoming casualties of Donald Trump’s sundry other trade battles. As the Wall Street Journal reports Thursday, Mexico and China have decided to target up to $986 million worth of American dairy exports with tariffs as retaliation for the Trump administration’s protectionist moves. Mexico is increasing its duty on cheese, while China is hitting cheese and whey. With their growing middle-class populations, both countries have become important markets in recent years for the U.S. dairy industry, which has found itself struggling with overproduction in the face of declining domestic milk consumption. Milk futures for July are down since Mexico announced its tariffs earlier this year—the last time the country imposed similar tariffs on U.S. cheese, shipments fell by 26 percent—and companies are already fretting. The president of Wisconsin’s BelGioioso Cheese called the situation “a nightmare.”

This is part of a larger pattern for the Trump administration, which the New York Times documents at length. So far, the administration’s efforts on trade and regulation have ended up hurting the very industries they claim to be helping. The 10 percent tariff Trump placed on aluminum, for instance, has made raw materials more expensive for most of the companies that actually produce aluminum products in the U.S., since they’re generally in the business of importing those raw materials and shaping them into more valuable upstream products. Steel tariffs have made pumping crude more expensive for oil companies by adding to the cost of building rigs and buying equipment. Soybean prices are crashing in response to Chinese tariff threats. Detroit’s car-makers are worried about potential tariffs on foreign autos, with executives warning about possible retaliation. The law of unintended consequences is playing out, or about to play out, in sector after sector of the economy.

The Trump administration has argued that businesses should accept this sort of “short-term pain” while it tries to rewire the entire global trading system to its advantage. But that’s little comfort to the industries that are suffering now, and hard to take seriously when the White House has demonstrated little in the way of a long-term strategy or vision on the issue. The only companies Trump and his Cabinet seemed to have a clear plan for helping was steel—prices are up thanks to the administration’s tariffs—which is unsurprising, since two of the president’s top trade advisers have deep connections to the industry. Other than that, Trump has mostly appeared happy to use industries as props when it fits his needs, while largely ignoring the actual problems his policies have created for them, or the deeper issues that ail them. That’s something everyone should keep in mind when judging his moves on trade: In isolation, they might make some sort of sense, but taken together, the approach is creating a much longer list of American losers than winners.