meta Trade war could milk US dairy profits :: The Bullvine - The Dairy Information You Want To Know When You Need It 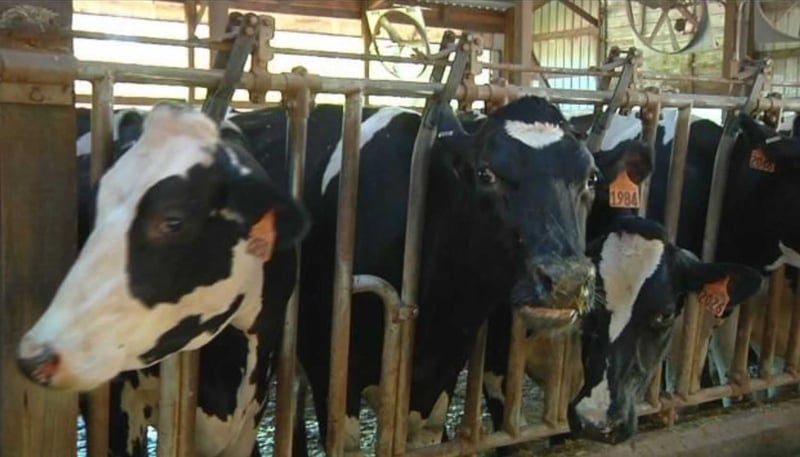 The trade war the U.S. is waging is starting to hit our homegrown dairy industry. (Source: KBJR via CNN)

The fallout from the trade war the U.S. is waging against various friends and foes is starting to hit Wisconsin.

Nations including Mexico and China have retaliated after President Donald Trump imposed several different tariffs on imports to America.

Down a dusty dirt road in rural northwest Wisconsin is Penokee Range Holsteins, a dairy farm owned by Morgan Peck.

Peck, his wife and their two sons have operated the farm for three and a half decades. It produces roughly 1 million gallons of milk annually, which is turned into cheese.

“It’s everything, I guess. It’s our career, it’s our passion,” Peck said.

That passion recently took a big hit, as Mexico and China announced big tariffs against the U.S. – Mexico with a 25 percent tariff on cheese, and China with tariffs on more than $34 billion on U.S. goods, including cheese.

“It feels kind of limiting,” said Peck, who added that it’s too early to tell the exact dollar impact it will have on his farm, but the long-term outlook isn’t great.

“If it doesn’t change from what it is now, we’re going to have a lot less dairy farms,” Peck said.

He said dairy is cyclical, running in three-year downturns.

But this year, he said, is the fourth year in a row dairy has been down – and the tariffs could prolong that downturn.

“It’s going to cycle back, but how many of us are going to be left when it’s done?” Peck said.

He said as it sits right now, the tariffs will stagnate his business; and he can’t afford not to grow, because upkeep on a farm and buying new equipment isn’t cheap.

“Things are so tight. There’s no room to buy a tractor or update a piece of equipment,” Peck said.

He said his family will find a way to work around the tariffs, but that doesn’t mean he isn’t concerned about the long-term fiscal health of his dairy farm.

“It’s rather disheartening, especially for our younger generation that wants to come into these farms,” Peck said.

At 60 years of age, that’s a real concern for Peck, as he expects his sons to take over in the not-so-distant future.

Jason Fishbach, a northwest Wisconsin agriculture agent who spends his days touring family barns like Peck’s, said the current economic situation could absolutely lead to the closure of any number of family dairy farms that pepper America’s dairyland.

“Absolutely. You know, dairy farms right now do not need any more stressors, and this is a bad time,” Fishbach said. “And again, we just don’t know, and that’s part of the problem.”

Together, Mexico and Canada’s tariffs could impact nearly $1 billion of U.S. dairy goods, among other products.