meta The Fertility Challenge :: The Bullvine - The Dairy Information You Want To Know When You Need It

The reproductive performance of your farm has a major impact on its profitability. Each cow’s lifetime profitability is dependent upon repeated cycles of pregnancy, calving, production and dry period. Optimizing fertility levels of a dairy herd requires outstanding management practices in combination with good genetic selection. Due to its complexity, achieving and maintaining high conception rates year over year remains a significant challenge for many dairy producers.

While most conversations about fertility focus on the final outcome of pregnancy, it is much more complicated in reality.  Fertility starts with a successful calving free of any subsequent disorders such as retained placenta, metritis or cystic ovaries. Then there is the onset of cycling and expression of heat, which requires extensive effort for dairy producers to monitor and record. After insemination, we have generally measured the fertility success by examining subsequent insemination records. Traits frequently used are 56-day non-return rate, total number of inseminations, interval between first and last insemination, also known as days open, with the assumption that the last insemination date is also the conception date. In recent years, Canadian Dairy Network (CDN) also incorporated veterinary pregnancy confirmation data collected from herds enrolled on DHI to better identify true conception dates. Even once pregnant, herd fertility levels are also affected by early embryonic loss, which ultimately delays the timing of the next calving and therefore calving interval. Simply stated, fertility cannot be defined by any single trait or measurement and is, in fact, a combination of several different factors.

One effective option for Canadian dairy producers to confirm pregnancy is the Milk Pregnancy Test offered through CanWest DHI and Valacta (i.e.: GestaLab). This low-cost option uses the DHI milk sample to confirm pregnancy at 28 days after insemination with a very high degree of accuracy. For the future, one significant opportunity that exists for the dairy cattle industry is the use of sensor data to collect improved measures of fertility across the various stages from heat detection, pregnancy and embryonic loss. As such data becomes available from herds with the technology on the farm, research will need to be done to identify measures of fertility that have sufficient accuracy for the provision of improved herd management information for producers as well as for use in future genetic and genomic evaluations calculated by CDN.

There is no doubt that dairy farmers agree on the fact that maintaining high levels of reproductive performance in the herd is not an easy task.  There are so many variables to manage, not the least of which is a top-notch nutritional program for both transition cows and those near peak lactation.  In an attempt to eliminate one of the important factors affecting the reproductive performance of their herd, some producers have decided to introduce heat synchronization protocols, also known as timed A.I., to facilitate or even eliminate heat detection activities for the farm. Accurate data is not readily available to quantify the degree of uptake of this herd management practise since it is not routinely collected from Canadian dairy farms. As an indication of the usage of heat synchronization protocols on dairy farms, CDN conducted an analysis examining the percentage of cow inseminations that are done on each of the seven days of the week.  Without synchronization, it is expected that breedings are approximately spread across all days.  Figure 1 shows the trend in the percentage of herds for which at least 50% of all inseminations were carried out on two specific days of the week for the time period from 2000 to 2017.  While this may not be an exact measure of the usage of heat synchronization protocols, it can serve as an indicator.

Fifteen years ago, less than ten percent of dairy herds in Canada had at least half of their cows inseminated on only two days of the week.  This statistic has now reached 30% for inseminations done in 2017 (Figure 1). Controlling the expression of heat used synchronization protocols therefore appears to be a growing trend, even though it is unlikely to be well accepted by the general public and consumers. 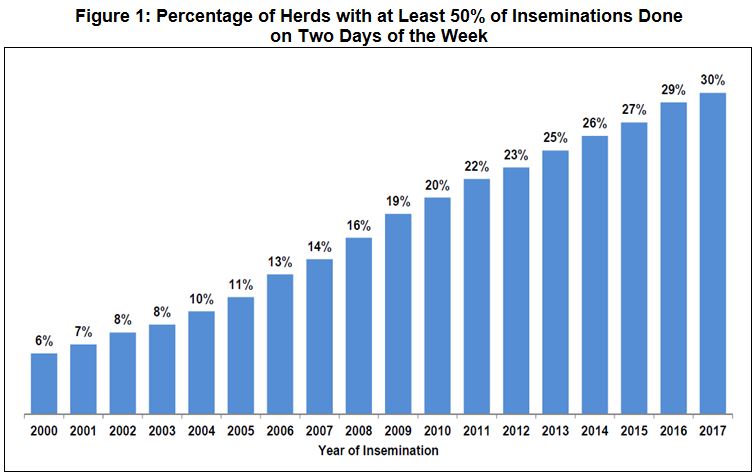 In addition to the complexities of herd management practises for optimal reproductive performance in dairy herds, there are also genetic considerations to take into account. Figure 2 shows the proof correlations that various traits have with Daughter Fertility and includes only traits with a correlation of at least 10%, either positive or negative. On the positive side, it is logical to see that traits such as Herd Life (48%) and Daughter Calving Ability (38%) are the most highly correlated with female fertility and these translate to indirect positive correlations with other traits such as Body Condition Score (25%), Metabolic Disease Resistance (22%) and Mastitis Resistance (21%). In terms of indexes, the Health & Fertility component of LPI is closely related to Daughter Fertility (92%) due to the significant weighting of this trait in the index, but LPI and Pro$ are also positively correlated at 25% and 20%, respectively. When traits of interest have positive correlations, it is easier to make progress for them all. A challenge with Daughter Fertility is that it also is negatively correlated with other traits such as Body Depth (-37%), Angularity (-33%), Dairy Strength (-26%) and Milk Yield (-14%).  Breeders interested in selecting for these traits will also have to directly select for Daughter Fertility or otherwise risk lowering the reproductive performance of their herd. 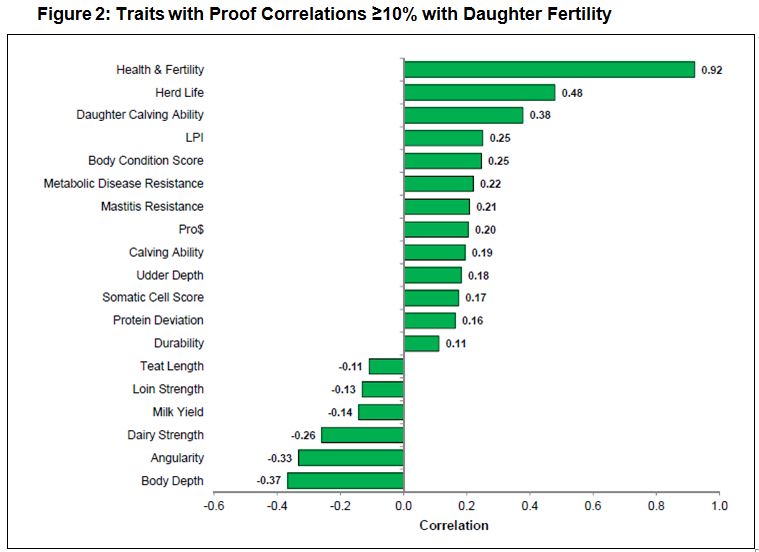 There is no doubt that maintaining high levels of reproductive performance in a dairy herd is a difficult challenge, yet an important one to address given its significant impact on herd profitability. The dairy cattle industry lacks accurate measures of the various components of female fertility. A growing trend towards the use of heat synchronization protocols is unlikely to be the answer in the eyes of the general public and consumer. In addition, genetic selection for improved reproductive performance requires special consideration due to relationships with other traits. Without any quick fixes, female fertility will continue to be a significant challenge requiring a concerted industry effort towards longer term improvements.