meta Tennessee Dairy farmers forced to sell cows after losing big business :: The Bullvine - The Dairy Information You Want To Know When You Need It 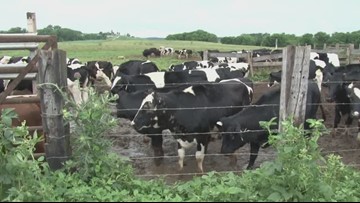 Some East Tennessee dairy farmers are having to sell their cows and leave the dairy business after losing contracts with bigger corporations.

Well, too much milk and not enough buyers means local dairy farmers are being cut out of the equation.

Watson Dairy has thrived in Sweetwater for over 90 years.

Since the 1990s, they’ve sold their milk to Dean Foods, the largest dairy company in the U.S.

That ends Thursday, May 31.

“You have 90 days to find another market for your milk, and after 90 days you’re not bringing it down here anymore,” said Watson.

He said that was the gist of the letter he got in the mail three months ago.

It reads, “Unfortunately, the situation is bigger than all of us – as an industry, we are producing more milk than people are drinking.”

Watson said he understands their decision to stop working with them, but that doesn’t make it any easier for his business.

Over a year, with extra dividends paid here and there, Watson said his dairy makes about $1 million from Dean Foods.

That’s the case for other dairy farmers in Sweetwater, too.

“The other farmers that haven’t gotten a letter, they don’t know if they’re getting a letter next,” said Watson. “They’re just scared. And that’s one reason they’re scared to buy our cows and we can’t get rid of the cows because they’re scared they may get a letter.”

Watson said he’s put his family through a lot working on this farm and making it what it is.

He knows the cows by name, knows their lineage and cares for them all.

Now, as the cows go up for sale, he’ll have to move on.

“We’re gonna do soy beans, do crops, corn, we’re gonna do beef cows,” said Watson. “We will make a way to survive. We have no problem with that. But we love doing the milk cows.”

Watson hopes he can start his own milk business and creamery with the cows that don’t get sold.