meta State yanks operating permit for troubled Oregon mega-dairy :: The Bullvine - The Dairy Information You Want To Know When You Need It 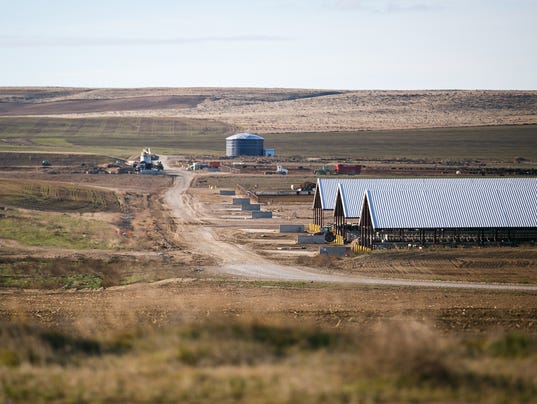 Greg te Velde’s Lost Valley Farm, Oregon’s second-largest dairy, on Sunday, March 18, 2018, near Boardman. The dairy, which plans to expand up to 30,000 cows, has had continuing issues with violating its wastewater permit and obtaining water rights.

The troubled dairy near Boardman has 60 days to remove about 13,000 cows and clean up the manure and water treatment lagoons, where waste has continued to overflow despite multiple regulatory and court threats.

Contamination has been seeping into the soil in an area where groundwater is endangered and legally protected.

Just six weeks ago, California-based owner Greg te Velde was threatened by the Oregon Department of Agriculture with a contempt hearing for failing to comply with a court settlement that was supposed to put an end to more than a year of environmental violations.

Te Velde opened the dairy in April 2017. Just 10 months later, Oregon filed a lawsuit seeking to effectively shut it down. The dairy had failed numerous inspections, had been cited four times, had been fined for environmental violations and was endangering nearby drinking water wells, the state noted.

In March 2018, the state settled the case after te Velde agreed to remove 75 acre feet, or about 24.4 million gallons, of manure and wastewater from the lagoons by June 1, and to report any system failures within 24 hours.

ODA officials expected the dairy would shut down anyway.

Tillamook County Creamery Association, which buys all the dairy’s milk for its Boardman cheese factory, had said it would cancel its contract, leaving te Velde with nowhere to sell his milk. And the dairy’s cows were scheduled to be auctioned off April 27, as part of a bank foreclosure proceeding. 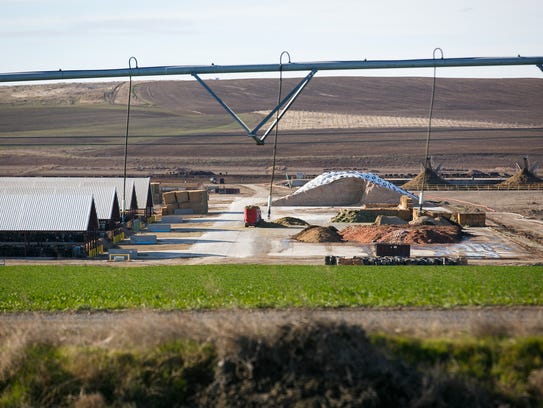 But none of those things have happened.

Te Velde filed for bankruptcy the day before the auction, putting the cattle sale on hold indefinitely.

According to testimony submitted by ODA and others in his bankruptcy case:

Te Velde has claimed in court that Tillamook can’t cancel his contract. The company continues to buy his milk while it waits for a judge to decide the question.

Te Velde has not removed manure and wastewater from the lagoons.

Instead, shortly before he declared bankruptcy, te Velde leased out more than a quarter of the land where the manure was supposed to be spread to another farmer, making it impossible to apply it.

Manure continues to overflow from the lagoons.

On May 2, ODA also discovered system failures that released more manure and wastewater, Wym Matthews, who oversees dairies for the department, told the court. Those were not reported within 24 hours, as required by the lawsuit settlement and by state law.

“To date, we have no evidence that spills have reached surface water or contaminated groundwater,” Cantu-Schomus told the Statesman Journal.

Despite multiple requests, te Velde has not submitted a complete annual report, as required by his permit. The report should prove that the dairy applied manure to crops at proper rates, to avoid contaminating groundwater.

Te Velde told the Statesman Journal Tuesday he is continuing to try to resolve the problems at the dairy. He said he feels things have taken a positive turn, but declined to comment further.

“I just want to stay low and work on these issues,” he said. “They’re not really public issues.”

They show that dairy manager Travis Love, who worked for te Velde for 17 years, has resigned. He is continuing to work part time as a consultant.

The Oregon Water Resources Department took control of a groundwater well te Velde had planned to tap under a stock-watering exemption, after te Velde refused to install an accurate flow meter to measure the water taken out of the endangered aquifer.

Now, the dairy has a severe water shortage, meaning it has had to bring in portable toilets, ask workers to provide their own drinking water, and truck in water to flush stalls and wash equipment, at a cost of $11,531 per week.

Te Velde also is a defendant in a wage and hour lawsuit.

Claimants are asserting they are entitled to class action status, and have asked for $1.5 million. Te Velde also is named as a respondent in a Cal/OSHA case relating to the claimed wrongful death of a worker at one of his California dairies. An award would be covered by insurance.

Te Velde has listed the dairy for sale for $95 million.

In the court filings, te Velde admits he began building the dairy without proper permits, and says he intended to finance construction with operating proceeds, meaning he did not plan to complete the facility before beginning operation.

He says the facility still could be completed quickly and with a minimal investment.

But Rabobank, the Dutch agricultural lender that is trying to foreclose on Lost Valley Farm and te Velde’s two California dairies, argues that the facility is not in good enough condition for another operator to take over.

Instead, it told the court, the cows should be removed and the facility rebuilt.

“ODA’s analysis is that Lost Valley Farm’s problems are far more serious and require major construction such as emptying and reconstructing the lagoons to design specifications, disposing of the lagoon contents, the manure and the vegetable waste from the tenant, and redesigning and rebuilding the sand lane,” Rabobank told the court. “Realistically, this cannot be done with 12,000 head of livestock at the dairy.”

Asked whether this is accurate, ODA’s Cantu-Schomus said enforcement documents filed with the court speak for themselves.

Te Velde has been in and out of drug rehab since March, after multiple arrests for methamphetamine possession.

He is getting treatment at Capo by the Sea in San Juan Capistrano, which describes itself as a luxury and executive drug and alcohol rehab where clients “can take in a round of golf, a deep-sea fishing excursion, tennis, surfing, private training at a nearby health club, or simply lounging by the pool — all while practicing the principles of recovery.”

The facility’s owner, John Kahal, told the court te Velde could conduct business for three or four hours a day while remaining in treatment.

“Our program has a great deal of flexibility,” he wrote.

But Rabobank called the idea that that would suffice “literally an unrealistic ‘pipe dream’ of an addict that glosses over Lost Valley Farm’s severe environmental and economic problems.”

“… Rabobank is not willing to finance the drug-addled fanciful dreams of this debtor during a lengthy Chapter 11 case that involves about 24,000 cows, 28,000 other head of livestock, three dairies in two states and about $160 million in total debt,” the bank told the court.

Greg te Velde’s Lost Valley Farm, Oregon’s second-largest dairy, on Sunday, March 18, 2018. The dairy opened a year ago without necessary permits for the nearly 1 million gallons of water per day that it uses; it used a loophole in Oregon law to pull water from an underground aquifer that’s been off limits to new wells for over 40 years.

As problems at the dairy mounted, the Tillamook County Creamery Association, which makes Tillamook Cheese, began getting negative publicity and determined its reputation was at risk, Patrick Criteser, the association’s president and chief executive officer, told the court.

The company already had notified te Velde it was “not pleased” he had violated a provision of his contract that required him to keep secret the fact that he supplied milk to the association.

“Accordingly, on March 23, 2018, (Tillamook) gave written notice to te Velde that it would stop picking up milk from the Oregon dairy as of April 22, 2018,” Criteser wrote.

Tillamook continued picking up milk on a temporary basis during auction preparations, so the cows would not go dry. It notified te Velde that its final pickup would be May 31.

But te Velde threatened to sue, saying the contract could not be broken because of bad publicity.

In response, Tillamook has noted that the dairy provided milk with unacceptably high bacteria counts more than 60 times over a one-year period, which is a valid reason for breaking the contract.

That required Tillamook to separately process and properly pasteurize the low-quality milk for consumption, at additional cost, Criteser wrote the court.

Tillamook County Creamery Association spokeswoman Tori Harms did not respond to interview requests for this story.