meta NZ dairy farmer set to lose thousands after disease shuts border :: The Bullvine - The Dairy Information You Want To Know When You Need It 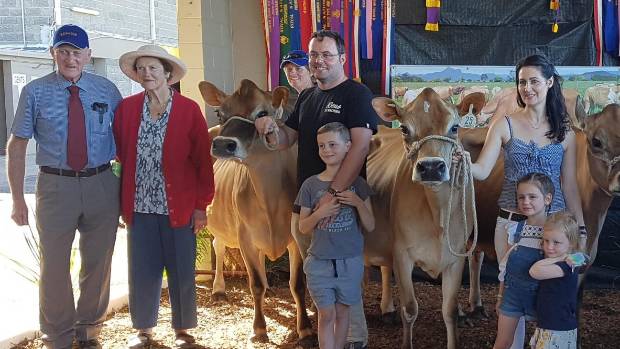 The cattle disease Mycoplasma bovis has claimed yet another victim – this time a farmer who claims to have spent almost $50,000 trying to import four champion jersey cows from Australia.

Rangiora dairy farmers Peter and Claire Hansen of Lilac Grove Jerseys had planned to import the cows for years but Mycoplasma has put paid to that.

Their bid for compensation of $300,000 has also failed, after they said Ministry for Primary Industries (MPI) officials assured them they would receive some.

The claim related to quarantine and opportunity costs if the Hansens had managed to import the cows and breed from them.

The Hansen’s misfortunes began on July 21 last year when Mycoplasma was first detected on a South Canterbury farm owned by Aad and Wilma van Leeuwen.

MPI director readiness and response Geoff Gwyn says the Hansens’ case does not meet the criteria for compensation.

Two months before then, on May 26, the Hansens bought four lots at the Kenarie, New South Wales ‘Sale of the Half Century’, for $22,000.

Each of the four was a champion in her class, including the most expensive buy, four-year-old Kenarie Inline Vinnie EX92, which sold for $8500.

The Hansens invested an additional $25,000 for the cows’ flights to New Zealand, including the quarantine testing for diseases such as M bovis and lodging at an export-accredited facility in Sydney.

This was disputed by MPI who said it received a claim from Hansen of $10,500 for vet testing, lodgings and shipping arrangements.

The cows were only 10 days out from leaving Australia and had passed all their tests when the New Zealand border was closed on July 22. The cows were also close to calving.

MPI refuted this, saying the import health standard was suspended on August 7.

The Hansens offered to undergo further M bovis testing, and Kenarie Jerseys offered up a “herd of origin” test for M bovis, which was negative. The cows also all tested negative for M bovis, but MPI said it had not received confirmation from Australian authorities.

“When they shut the border MPI said we wouldn’t normally get compensation but because we’d done our research, we’d spoken to MPI and followed all the protocols, we’d receive it on moral grounds. That came from two of the head people within animal imports,” Hansen said.

MPI said Hansen had not been given this assurance regarding compensation. MPI officials had advised him he was able to submit a claim for compensation, but did not say he would receive it.

“The permit for importing cattle does not guarantee that the animals will be given biosecurity clearance. The animals still need to satisfy the provisions set out in the import health standard, which can change over time – rapidly if it needs to,” MPI said.

It had been difficult to get any answers for the first six months, with officials not answering letters or returning phone calls.

“If you run a business like that you’d go broke after a week, the way they were to deal with was very unprofessional.”

“It’s a lot of money to flush down the toilet. The disease has probably come in through someone bringing something through the back door, whereas if you follow the rules you get punished.”

“We believe little more could be done to prove the disease-free status of any animal for any disease and we asked that MPI re-consider. It was considerably more testing than required previously by the Import Health Standard and by the standards required for other risk items such as germplasm, which were still being imported and they had not met the testing standards we offered.”

MPI disagreed about not answering correspondence or calls, saying they were replied to in a timely manner. The Import Health Standard required that all cattle are tested negative for M. bovis.

In a letter signed by MPI director-general Martyn Dunne on February 26, the Hansens were informed they would not be eligible for compensation.

“Under Section 162A of the Biosecurity Act 1993, compensation may be payable for losses that arise from an exercise of power that damages or destroys the claimant’s property; or restricts the movement or disposal of the claimant’s goods,” the letter said.

Peter said it was clear the movement of his cattle had been restricted and therefore he should have been entitled to compensation.

MPI director readiness and response Geoff Gwyn clarified in a statement that “after lengthy discussions with Mr Hansen, and careful consideration of his claim, MPI has determined that he did not meet the criteria to receive payment for his losses.”

“Compensation is only for verifiable losses as a result of MPI exercising its powers under the Biosecurity Act for the purpose of control or eradication of an organism. None of these powers were exercised on Mr Hansen.”

“This is taxpayers’ money and the criteria for compensation is detailed in under section 162A of the Biosecurity Act, and this is the key test,” Gwyn said.

On Thursday MPI officials told a Parliamentary select committee the total cost of Mycoplasma was projected to be almost $100 million. To date $2.6m had so far been paid out to affected farmers, and they predicted a further $60m of liabilities.

The disease has been detected on 26 properties, and a total of 43 farms were now under restricted place notices; 51 claims for compensation had been made and 10 farmers had been paid either in full or in part.

The Hansens are not the only ones affected by the unexpected turn of events. Jersey breeders had also been keen to get new bloodlines into the country.

In the meantime the cows are being well looked after by a “very kind” family in New South Wales.