meta NZ calf sells for $35,000 – Once-in-a-lifetime opportunity :: The Bullvine - The Dairy Information You Want To Know When You Need It 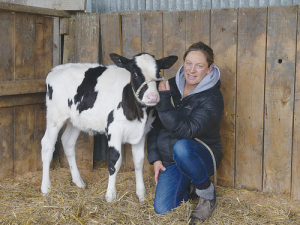 Born at Duntroon’s Busy Brook Holstein stud from an imported embryo, she is the daughter of the two-time World Dairy Expo and Royal Winter Fair Grand Champion RF Goldwyn Hailey.

Sherriff said he will make a detailed plan of how best to use the heifer, to be renamed Hailey, but will probably start flushing her for embryos from 14 – 16 months age.

“We’ve had three lots of NZ enquiries already. Because she’s the only progeny of that cow family in the southern hemisphere there’ll also be Australian interest. That’s where we can market the embryos.

“We’ll keep some of her first embryos as insurance in case something goes wrong.

“There’ll be some on the market and then we’ll calve her and hopefully she will be as good as her mother.”

Under the North American classification system, the calf’s mother, RF Goldwyn Hailey, has been rated three times as excellent 97. Sherriff says that is the highest any cow’s been classified in the world and to get it three times is “unheard of”.

“It’s also unheard of for a cow to win twice at that type of show; that’s the best of the best.”

“What you’re buying is potential — marketing ability,” he says. “There’s certainly nothing wrong with her; she’s extremely correct. If she wasn’t, if she didn’t look right, we wouldn’t have bothered buying her.”

Sherriff says he is not known for going out and buying stock.

“This is a once-in-a-lifetime opportunity really, to be able to get a calf like this.”

While proud of his purchase, Sherriff is just as proud of another calf, born in April on his own farm from genetics best described as historic.

He said he has three straws of semen still in storage, dated 1969, from MMB Linmack, a bull he described as the number-one in Australasia in the 1970s. Linmack is known to have sired at least 100 cows rated as excellent.

He decided to give one straw a try and the result is a healthy female calf, which he has dubbed Sherraine Linmack Molly.

“Our focus is on larger, high-producing cows,” he said.

It’s a small and intensive farm on which nutrient leaching is no more than 20.

“We keep all our young stock. Everything’s grazed and produced onfarm including maize; we buy in only wheat that we feed in the shed.”

Sherriff says the industry has been “under the hammer” with its push to high stocking rates, but environmental challenges will cause a return to valuing production per cow.

His philosophy is that one heavy cow could produce as much milk as two light ones, and with less environmental loading.

“I’m really enthusiastic about the future of the Holstein Friesian breed.”