meta No-deal Brexit ‘would be best thing’ for dairy business :: The Bullvine - The Dairy Information You Want To Know When You Need It

No-deal Brexit ‘would be best thing’ for dairy business

The chairman of Scotland’s largest independent dairy remains undeterred – optimistic even – about the prospect of a no-deal Brexit. Gemma Mackenzie finds out more 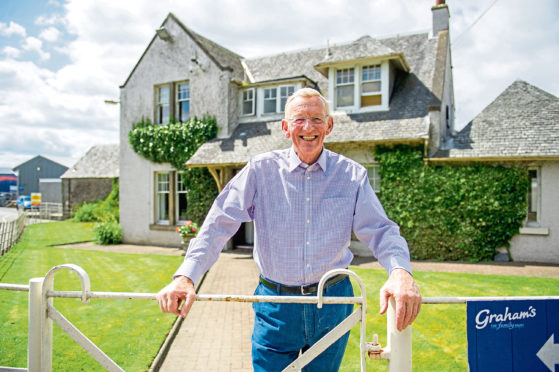 Graham’s The Family Dairy has grown from its humble beginnings as a cow and cart milk round in Bridge of Allan to the No2 food and drink brand in Scotland, second only to Irn-Bru.

As the company celebrates its 80th anniversary, company chairman Robert Graham reflects on its growth and plans for the future.

“My father started (the business) 80 years ago,” said Mr Graham.

“He came here to the farm in 1939. He had 12 cows and they were milked by hand. The milk was put into a churn and it would go on to the pony and trap.

“He would then take it down town and the housewives would come out and get a jug of milk.”

Fast forward to the current day, and the company now has a 300-cow herd of pedigree Jersey cows and 105 farmer suppliers from all over Scotland, and one in Penrith.

“All the farmers that supply us are specifically selected,” said Mr Graham, who works alongside his wife Jean and the couple’s two children Robert and Carol.

The company’s main base remains at Airthrey Kerse Farm in Bridge of Allan, and it also runs processing plants in Nairn and Cowdenbeath, Fife.

Key milestones in the company’s 80-year history include the purchase of the firm’s first pasteurisation plant, to meet customer demands as shoppers moved away from raw milk, and a major rebranding of the business from Graham’s Dairies Limited to Graham’s The Family Dairy in 2006.

“The big change came for us when the university came to town in the late 1960s and we then had more people come from the south,” said Mr Graham.

“When our drivers went to their door and asked can we supply milk, they would ask if it was pasteurised. That was a big change for us.

“Jean and I said we need to change, so we started to sell pasteurised milk and that opened doors for us.”

The company’s product range has expanded significantly since then and comprises everything from liquid milk, cream and butter, to yoghurt, ice cream, cottage cheese and quark.

And to commemorate the firm’s special anniversary this year, and to meet customer demands to move away from plastic, Graham’s has launched a range of glass milk bottles from its Nairn processing plant. These are available for home delivery or through various retail outlets.

“People are talking about recycling, which we are into ourselves, so we have put our money where our mouth is,” said Mr Graham.

Looking to the future, Mr Graham says the family is still pursuing planning consent for a housing development and £20 million new dairy facility at Airthrey Green on the outskirts of Stirling.

Admitting his frustration at the planning application process, which has involved an appeal to the Court of Session to overturn the Scottish Government’s decision to refuse consent, Mr Graham said: “We are still committed (to a new dairy).”

And while the planning process continues, Mr Graham says continuing to develop new products and growing the domestic customer base is key. The firm is the main Scottish supplier to Aldi, Lidl, Spar, Starbucks, Costa and Cafe Nero.

He has no plans to recruit new farmer suppliers, but instead wants to encourage existing suppliers to increase production.

“We are committed to the plans in the different areas,” added Mr Graham.

“It’s better business-wise if it’s not all in the one plant.”

When asked if he was concerned about the continued decline in Scottish dairy herd numbers, and the prospect of crashing out of Europe without a deal, Mr Graham remained upbeat and optimistic.

“The ones (dairy farmers) that are staying in are getting larger and there’s still people getting into dairying,” he said.

On Brexit, contrary to the views of his peers in other sectors of agriculture, Mr Graham sees no deal as a huge opportunity as the introduction of tariffs could put the brakes on dairy imports to the UK.

“It would be the best thing for the dairy business,” he said.

“Britain is the largest importer of dairy products in the world, other than China. We have all the conditions to produce more.”

The catch, according to Mr Graham, is the lack of processing facilities in the UK – a case the firm will be arguing when pursuing permission for its new plant.

Source: The Press and Journal