meta New dairy cattle breeding method increases genetic selection efficiency :: The Bullvine - The Dairy Information You Want To Know When You Need It 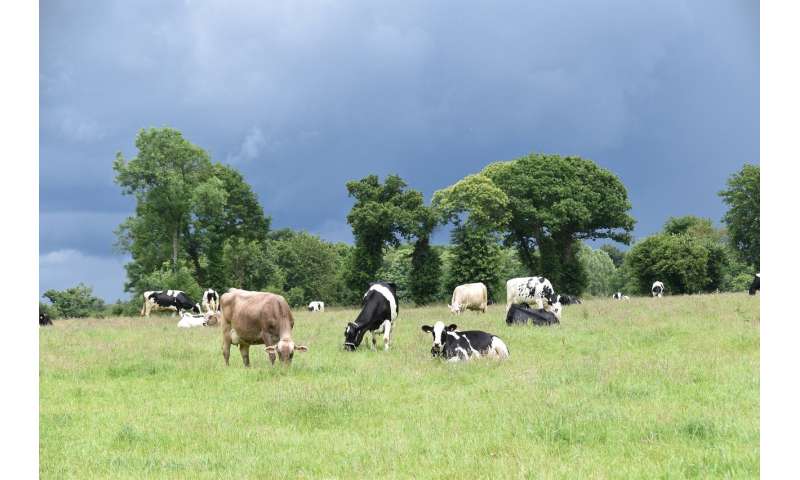 Brazilian scientists at São Paulo State University (UNESP) collaborating with colleagues at the University of Maryland and the United States Department of Agriculture (USDA) have developed a dairy cattle breeding method that adds a new parameter to genetic selection and conserves or even improves a population’s genetic diversity.

The study, which is published in Journal of Dairy Science, was funded by the São Paulo Research Foundation—FAPESP and USDA.

Besides genetic value associated with milk, fat and protein yields, the new method also takes into consideration the variance in gametic diversity and what the authors call “relative predicted transmitting ability,” defined as an individual animal’s capacity to transmit its genetic traits to the next generation based on this variance.

“Not all progeny of highly productive animals inherit this quality. The new method selects animals that will produce extremely productive offspring,” said Daniel Jordan de Abreu Santos, who conducted the study while he was a postdoctoral fellow at UNESP’s School of Agricultural and Veterinary Sciences (FCAV) in Jaboticabal, São Paulo State.

Santos is currently doing more postdoctoral research at the University of Maryland in the United States. This is his second stint at Maryland, where he was previously a research intern with a scholarship from the FAPESP.

“Gamete diversity variance is generated by the separation of homologous chromosomes and the rate of recombination between genes linked to them. It isn’t accounted for by the traditional selection method,” Santos told.

The new method estimates the probability of the transmission of traits to the next generation on the basis of the genetic data of a parent or the possible combinations in a given mating.

Although it was developed for the selection of any species, in this study, the method was applied to Holstein and Jersey dairy cattle because of the volume and quality of the available data.

In computer simulations, the method produced genetic gains of up to 16 percent in ten generations of Holstein cattle, compared with a control group for which gamete diversity was not a factor.

The study was possible because matings can now be simulated using large genomics databases with genetic details for the animals involved, including genes associated with certain traits of interest in breeding programs.

Based on these data, scientists can estimate the possible combinations of the parents’ genetic material and predict the traits of their progeny. However, traits are not uniformly distributed among offspring.

Animals with the desired traits may produce offspring with very high or low levels of these same traits. As a result, the predicted traits of progeny in terms of milk, meat or fat yield are only an average of the parents’ traits. The new method enables scientists to estimate the substantial variation around this average.

“It’s now possible to predict which animals will produce highly productive offspring, above the expected average, before they mate. Gamete diversity is the factor that generates this estimate, determining the animal’s capacity to transmit the traits of interest to its progeny,” Santos said.

To apply the theory to an actual breeding program, Santos used data for over 160,000 Jersey cattle and approximately 1.4 million Holstein cattle from the database of the USDA’s Agricultural Research Service.

Holstein is the world’s major dairy breed and accounts for 90 percent of all US dairy cattle.

Software developed by the researchers was used to calculate the variation in all possible chromosome combinations and enabled them to separate individual animals with more or less gamete diversity variance.

“These variations can be used to select animals for specific purposes,” Santos said. “You can select animals to have more homogeneous progeny, which you might want to do in order to obtain traits such as birth weight, or more heterogeneous progeny and hence some offspring that are more productive than the expected average.”

Beyond guaranteeing that successive generations are as productive as their parents, the new parameter promises to produce major genetic gains in progeny bred from the same source animals.

The researchers also investigated the possible impact of the method on actual dairy herds. The match between variance based on genomic data and the actual variance observed in adult female progeny reached 90 percent in the case of 400 offspring per sire.

“This is cutting-edge science and will take some time to arrive in Brazil, but its current significance for us is that we import a lot of genetic material from US Holstein for breeding purposes and a large proportion of the Holstein genetic base in Brazil comes from semen produced in the US,” said Humberto Tonhati, Full Professor at FCAV-UNESP and principal investigator for the study in Brazil.

The new parameter also helps mitigate the reductive impact of selection on a population’s genetic diversity. In the case of livestock such as cattle, genetic variability tends to be low because of inbreeding.

“The new method offers a means of maintaining genetic variability. Individuals considered better by the traditional method will often be endogamous—offspring from the same gene pool—but when the new parameter is taken into account, they can no longer be classed among the best,” Santos said.