meta Net Merit Improved to Maximize Cow Profitability :: The Bullvine - The Dairy Information You Want To Know When You Need It

The revised formula for Net Merit was implemented with the triannual evaluations on August 10, 2021 – delivering an improved tool to dairy producers to breed more profitable and efficient cows.

The 2021 revision is quite significant, with three new traits and important updates to economic weights based on new information.

“The goal of Net Merit has remained constant – to select for a balance of traits that maximize profitability,” stated João Dürr, CEO of CDCB. “We want the next generations of cows to be healthier, longer living, more resilient, more efficient, and ultimately more profitable than the current generation. That is what Net Merit is designed to do.”

What are the key takeaways of the Net Merit 2021 revision?

The figure above shows the relative emphasis of the traits and composites in Net Merit. Relative emphasis considers that traits have different reliabilities and ranges of genetic variation – particularly beneficial when adding new traits with high economic importance and lower reliability, such as Feed Saved and Residual Feed Intake (RFI). 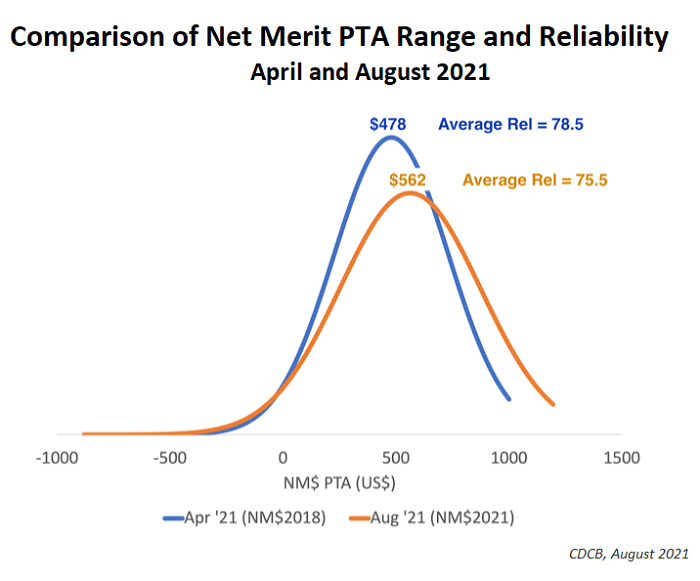 The figure above shows the distribution of NM$ Predicted Transmitting Abilities (PTA) for A.I. bulls*, comparing the 2018 and 2021 Net Merit versions. NM$ 2021 (in orange) has a wider distribution – or larger variance – and a higher mean PTA ($562, compared with the mean of $478 in April). As expected, the inclusion of residual feed intake (RFI), which is a trait with high economic value and low average reliability made the NM$ mean reliability decrease from 78.5% to 75.5% among the A.I. bulls. (*Includes all A.I. bulls with NAAB status of Active (A), Foreign (F), Genomic (G) or Progeny-test (P), August 2021, approximately 7000 bulls.

In summary, Net Merit has always been based on the best available research to provide unbiased estimates of expected lifetime profit. The 2021 update incorporates newer traits of significant economic importance and revises previous assumptions. Using a comprehensive index like Net Merit – which accounts for all traits appropriately and without bias – is the best way to maximize profitability through genetic improvement in all evaluated traits.