meta MSU animal science professor uses genetics to find answers in dairy cattle disease :: The Bullvine - The Dairy Information You Want To Know When You Need It 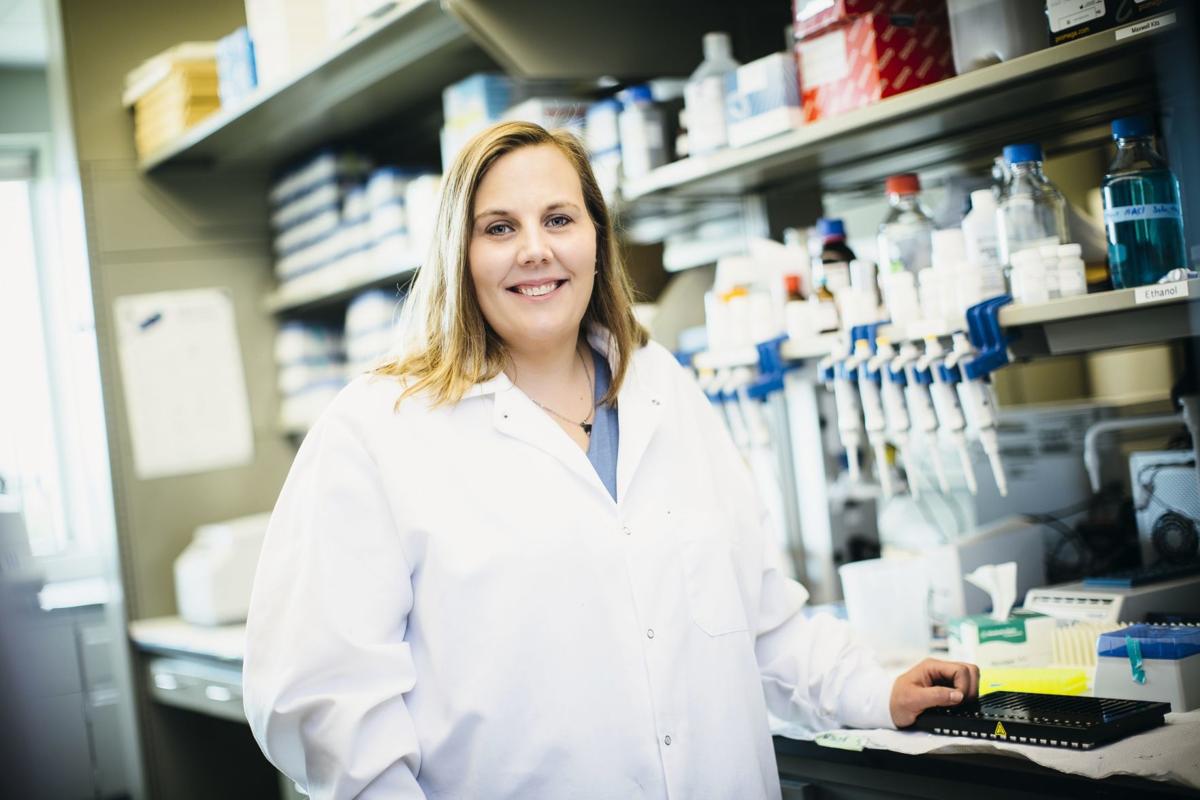 Jennifer Thomson, assistant professor of livestock genomics in the Department of Animal and Range Sciences in the College of Agriculture, has been the principal investigator researching dairy cows’ digestive system sugar level respond to various cattle feed.

An international team of scientists that includes a Montana State University animal geneticist may have discovered why some dairy cows get sick from a particular diet while others don’t.

The unique genetic makeup of a cow can influence the microbial populations that live inside its stomach to help digest food. Therefore, each cow varies in how it utilizes feed, said Jennifer Thomson, associate professor of animal genetics and genomics in the Department of Animal and Range Sciences in MSU’s College of Agriculture and co-author of a paper explaining those findings. The paper was published earlier this year in the journal Frontiers in Genetics.

Calling the genetic-microbial connection a significant discovery, Thomson said the paper is the first “that’s really quantifying how an animal’s genetic make-up affects the microbial population of the rumen.”

“The implications of this paper are that we may ultimately be able to select cows with a rumen microbial population more adept and efficient at using high energy diets,” said Patrick Hatfield, head of MSU’s Department of Animal and Range Sciences.

The rumen is the largest of four compartments in a cow’s stomach and the place where microorganisms are involved in digestion. Another focus of the study was acidosis, the buildup of acid in blood and tissues that can lead to a decline in milk production.

“The genetic makeup and diversity of rumen microbes in a cow’s stomach is critical to optimum nutrient digestion,” Hatfield said. “Unlike humans in which acid and enzymatic digestion is the first process to take place in the human digestion track, microbial digestion of the feeds and forages a cow consumes is the first line of digestion.”

Thomson was asked to join the project by Ian Lean, an Australian researcher who is a leading authority in the medicine, nutrition and management of dairy cattle and winner of the Gilruth Prize, the most prestigious award given by the Australian Veterinary Association. He is founder and managing director of Scibus, an Australian company that conducts research and provides consultation services to dairy and beef producers. Thomson was the only geneticist and American on the team.

Lean said he had been working on ruminal acidosis for about 15 years and had, along with his students, developed a more precise diagnostic test for acidosis. However, they recognized a need to explain a marked variation in the way individual animals responded to dietary challenges.

He said the groups’ vision was to link the host animal genome to the composition of microbes in the animal’s gut and then to the digestive functions of the animal’s gastrointestinal track.

“These differences in response are important to understanding health risks and productivity of ruminant livestock,” Lean said.

Researchers in the dairy cow study fed diets high in grain and sugar to heifers (15 to 21 months old, all but four pregnant) in an effort to induce acidosis. Although many large dairies have nutritionists, and dairies do a lot to prevent acidosis, it can still develop, Thomson said.

“We feed a fairly concentrated diet to meet their requirements for milk production,” she said. “That might predispose them to acidosis.”

Thomson noted that there’s a “huge variety in diets fed to dairy cows.” Sources of sugar added to their feed for energy for milk production, for example, might include such things as cakes, cookies and chocolate candy bars that are considered unfit for humans, beer-soaked grain, grape skin and seeds, orange juice pulp and potato waste from making french fries and hash browns.

“We (the general public) are big proponents of cost-effective feed sources that use something that was a byproduct of human food products,” Thomson said. “By-product feeding, using products that aren’t fit for human consumption, allows us to make nutritious animal food for healthy livestock production.”

The dairy project was a fairly small pilot study involving 40 Holsteins, but it provided the rationale for a larger field study, Thomson said. The same researchers that conducted the initial project are now carrying out the expanded study with 300 Holsteins, the most common breed of dairy cows.

“I’m thrilled. I think this is a really exciting area of research,” Thomson said.

She added that the results of both studies should apply to other breeds, including the beef cattle that are much more common in Montana than dairy cattle.

“I think this will definitely have applications for feedlot cattle,” Thomson said.

Dairy cows are the focus of these studies, in part, because they are fairly genetically uniform. “They have been selected heavily for milk production,” Thomson said. Also, significant data had already been collected from these cows.

As they did in the first study, the Australians are collecting DNA from Australian heifers and microbial information from their rumens. They will send samples to MSU for DNA extraction and then the DNA samples will go to Neogen, an agricultural genomics laboratory in Lincoln, Nebraska, for analysis. Thomson will then interpret all the data, a time-consuming process since she usually receives — for each animal — about 150,000 genotypes and 100 different data points about the microbial community that lives in its rumen.

“From the time all the samples arrive, it will probably take me six months,” Thomson said.

She will run her analyses while continuing to teach and work on other research projects, Thomson said. Her primary research involves beef cattle. She is also part of an MSU team that studies Rocky Mountain bighorn sheep in Montana and Wyoming and just published a paper about evaluating sample sizes in wild populations.

The first author of the paper titled, “Genetic Markers are Associated with the Ruminal Microbiome and Metabolome in Grain and Sugar Challenged Dairy Heifers,” was Helen Golder, a doctoral student at Scibus and the University of Sydney. Co-authors, in addition to Thomson and Lean, were Stuart Denman and Chris McSweeney from the “Agriculture and Food” research area of the Commonwealth Scientific and Industrial Research Organization (CSIRO).