meta Lying Time of Dairy Cows: Importance of a behavioral need :: The Bullvine - The Dairy Information You Want To Know When You Need It

Lying Time of Dairy Cows: Importance of a behavioral need

Resting is a strong behavioral need. Mid-lactation dairy cows should spend roughly half of the day lying down (Cook et al., 2007). 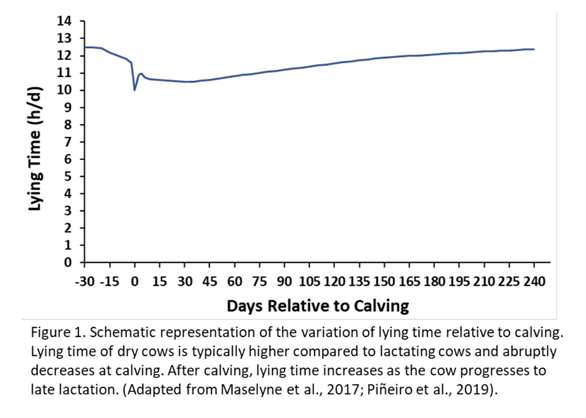 Insufficient lying time leads to increased stress, alterations in feeding behavior (decreased feeding time) and lameness in dairy cows (Galindo and Broom, 2000; Huzzey et al., 2006). In turn, lameness decreases milk production and reproductive performance and increases the risk of cows exiting the herd. Management practices and environment (i.e., extrinsic factors) will determine the lying time of cows. These are factors we can control and optimize to meet the behavioral needs and time budgets of dairy cows. Working with best management practices and providing an appropriate environment will prevent lameness and stress in dairy cows and, consequently, increase milk production and health and reproductive performance.

Best management practices include best grouping and regrouping strategies such as having appropriate stocking densities in pens (especially pre-fresh and fresh pens), avoiding excessively frequent regrouping and avoiding commingling of cows in different lactations to decrease competition between cows. In addition, cows should not experience excessive time away from the pen for milking or restraint for long periods of time. Time milking varies depending on milking frequency, pen/parlor size, pen stocking density, distance from the pen to the milking parlor. In practice, to achieve the goal of <3 hours away from the pen, one could assess the time when the first cow leaves the pen to be milked until the last cow returns from the parlor and it should not take more than one hour if milking three times daily. 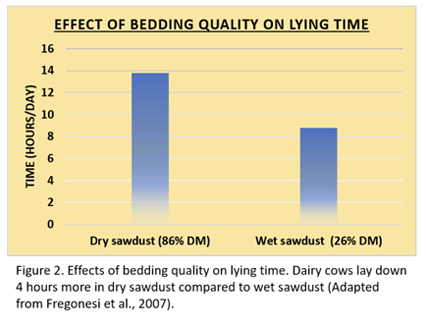 Stall base type and design and maintenance of the lying surface affect lying time. Dairy cows from herds with sand-bedded stalls showed significantly higher lying time compared to herds with mattress stalls (12.7 vs 11.5 h/d, respectively; Gomez and Cook, 2010). Furthermore, herds with deep-bedded stalls have a significantly lower prevalence of lameness compared to herds with mattress stalls (Espejo et al., 2006). Lying time of Holstein cows housed in free-stall barns increased by roughly one hour when increasing the width of stalls from 42 to 47 inches or when removing the brisket board from the stall (Tucker et al., 2004). However, brisket boards help to allocate cows with their back close to the rear curb to avoid cows defecating or urinating on the stalls and should be located 95 inches from the rear curb and not more than 4 inches high to allow cows to launch their front leg forward when rising (Cook., 2007). Several studies showed that appropriate management and maintenance of deep bedding stalls will increase lying time. Drissler and collaborators (2005) showed that for every inch of sand lost below the rear curb lying time decreases 28 min/d. In

Heat stress decreases lying time. Results from Allen et al., 2015 suggest that during periods of heat load and after reaching a threshold body temperature cows stand up to better dissipate their body heat. The period from when a cow stands up until transitioning to lying down again is defined as a standing bout. In this study, standing bout duration increased by roughly one hour when initial body heat increased from 100 to 105°F. In turn, increased standing time increases the risk of lameness. This partially explains why there is a significant association between heat stress and lameness in dairy cows. Providing appropriate heat abatement when the Temperature Humidity Index, THI, is ≥68 (THI corresponding to 78°F and 10% RH or 72°F and 50% RH), especially in the lying area of cows, will increase lying time, decrease lameness and increase health and reproductive performance and milk production of dairy cows.