meta Live shipment of 5,000 Australian cattle halted over alleged ear tag tampering :: The Bullvine - The Dairy Information You Want To Know When You Need It 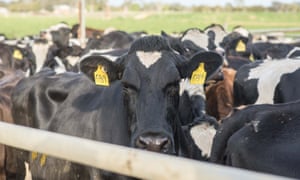 A shipment of 5,000 cattle due to leave Victoria for China on the live export ship Yangtze Fortune has been halted by Australian officials. Photograph: Caroline Duncan Photography/AAP

Australian officials have halted a proposed shipment of 5,000 cattle over allegations that ear tags had been tampered with to circumvent China’s strict import protocols.

The dairy cattle were scheduled to leave Portland in southern Victoria on the live export ship Yangtze Fortune on 23 August, bound for China as breeding stock.

Instead they spent weeks in feedlots as federal agriculture officials told the live exporter to halt the consignment following allegations of tampering.

“This decision was due to the department’s concerns that elements of China’s strict export protocols had not been adhered to in relation to this specific consignment,” a Department of Agriculture spokesperson said. “This issue does not relate to any type of disease outbreak in Australia.”

The department said it was conducting a joint investigation with Agriculture Victoria and providing regular updates to authorities in China. It said it would not comment further while the investigation was under way.

The Portland Observer newspaper reported that the cattle were filling up local feedlots, but the department said they could be moved.

“There are no current restrictions on the domestic movement of the cattle,” a spokesman said. “This is a commercial decision for the exporter.”

It was understood that ear tags, used to trace the origin of cattle, were tampered with.

He said that halting the shipment was a “drastic action” that reflected the seriousness of the incident.

“Compliance with our integrity systems is paramount and if there has been a breach we hope the department investigates that thoroughly,” Harvey-Sutton told Guardian Australia. “But we would also like the department to conclude their investigation as soon as possible because it obviously does come at a significant cost to the exporter when consignments are held up.”

It comes amid calls for an urgent review of the live export supply chain system after Guardian Australia reported that another live exporter was under investigation for a supply chain breach in Indonesia.

Four Australian cattle, exported by Perth-based International Livestock Exports, were filmed being held down by ropes and slaughtered in a mosque car park. ILE said it believed the cattle had been sold by a “rogue person” at one of the 140 Indonesian facilities in its supply chain, and had suspended that facility.

The RSPCA’s senior policy officer, Dr Jed Goodfellow, said the incident was a stark reminder of the inherent risks of live export, and criticised attempts to shift blame onto Indonesian facilities.

“RSPCA Australia is also concerned about a trend in [exporter supply chain assurance system] non-compliance investigations where blame is being shifted to the in-market abattoir or facility, which is then periodically suspended to allow the exporter to simply move to the next abattoir down the road,” Goodfellow said.

“Given the number of breaches recorded against this exporter, this shows that there is simply no effective deterrent under the current ESCAS system. It is has become a system of managing animal cruelty incidents rather than stamping them out.

“At the end of the day, the exporter must be held accountable for such breaches as it is ultimately their decision as to what supply chains the animals are sent into.”