meta ‘I wouldn’t wish what we went through then on my worst enemy’: Wisconsin dairy crisis focus of Farm Aid 2019 :: The Bullvine - The Dairy Information You Want To Know When You Need It

‘I wouldn’t wish what we went through then on my worst enemy’: Wisconsin dairy crisis focus of Farm Aid 2019

Dairy farmer Paul Rozwadowski came to Farm Aid 2019 to help city folks better understand what farmers have gone through in a vicious downturn that’s lasted nearly five years – and he came away inspired by how much they cared.

People from Chicago, Milwaukee, all over, showed genuine concern for the plight of farmers caught in a maelstrom of low milk prices that only now barely started to turn around, said Rozwadowski, from Stanley.

They came up to thank him for being a farmer as he worked a National Family Farm Coalition booth in Farm Aid’s Home Grown Village, an assortment of mostly nonprofits intent on spreading their message to the public.

“It was very genuine. And, as a farmer, it meant a lot to me,” Rozwadowski said.

Farmers in Wisconsin, and across the U.S., have had a tough time with extreme weather, low commodity prices and relentless economic forces driving them out of business.

“Farm income has been cut nearly in half since 2013,” said Farm Aid Executive Director Carolyn Mugar.

For dairy farmers, a worldwide glut of milk has driven prices down to the point where many have lost money for the last five years. Nearly 3,000 U.S. dairy farms folded in 2018, about a 6.5% decline. 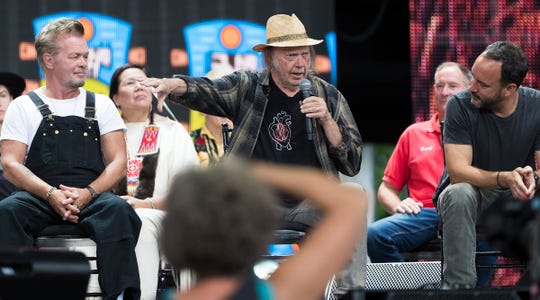 Though the milk price has improved some in recent months, Wisconsin has been losing more than two dairy farms a day, wreaking havoc on the rural economy. Many families have exhausted their savings and credit to remain in business; some farmers have committed suicide.

Rozwadowski, 64, says he should be close to retirement. But the downturn in dairy that began in late 2014, coupled with other difficult years, hasn’t allowed him to put money into retirement savings.

“My wife and I have been able to pay our bills but that’s about it,” he said.

They went through the farm crisis of the mid-1980s when thousands of farmers across the U.S. were forced out of business from a lethal combination of low commodity prices and high interest rates.

Then, Rozwadowski said, he kept a long list of people he owed money to. One by one he paid them off, but it took a while and was stressful.

“I wouldn’t wish what we went through then on my worst enemy,” he said.

This time around, he doesn’t have that kind of debt. But he does have his herd of 54 cows up for sale, and he would like to ease out of dairy farming in the next year or so.

So far, there haven’t been any takers in a marketplace that has a lot of cows available as farmers quit under duress.

“A lot of people have told me to sell my cows for slaughter. But I’m not going to do that. I just don’t want to do it,” Rozwadowski said.

“I am going to see how it plays out. I am in a position where I can do that.”

Driving the back roads to Alpine Valley Music Theater, the site of Farm Aid 2019, you wouldn’t know the farm economy was in trouble. Mile after mile, the fields of corn, soybeans, hay and other crops appear to be flourishing.

But the reality is different.

“We’re proud of the farm families who are coming together in the face of adversity to stay on their land. Now is the time to rally behind them and show our appreciation for all they do for our country and for each of us.”

This was only the second time in its 34-year history that Farm Aid has been held in the Dairy State; the first was in 2010 at Miller Park for Farm Aid’s 25th anniversary.

The music lineup this year included Nelson, Neil Young, John Mellencamp, Dave Matthews, Bonnie Raitt, Luke Combs and 11 other acts. Nelson, Young and Mellencamp organized the first Farm Aid concert in 1985 to raise awareness about the loss of family farms and to raise funds to keep farm families on the land. Matthews joined the Farm Aid Board of Directors in 2001.

Every artist playing Farm Aid performed without pay and covered their own travel expenses. An event like this, long sold out, attracted a whole lot of people — 30,000 to be exact. There was a ton of traffic, too.

Since 1985, Farm Aid has raised $57 million. Its 1-800-FARM-AID crisis line provides services to farm families in crisis, and its Farmer Resource Network connects farmers to organizations across the country.

The daylong festival kicked off with a news conference featuring a handful of Wisconsin farmers as well as Nelson, Matthews, Mellencamp and Young.

Farmers, Matthews said, should be “paid what they’re due.”

Dairy farmer Sarah Lloyd, from Wisconsin Dells, made an urgent plea for the public to get behind farmers’ efforts to change government policies and get farmers a bigger share of the food dollar.

“My husband and I are dairy farmers, and we’re going broke,” Lloyd said. “We need the federal government to take action on pricing.”

“We need legislation to make sure that all farmers follow sustainable practices and not destroy the earth,” he said. 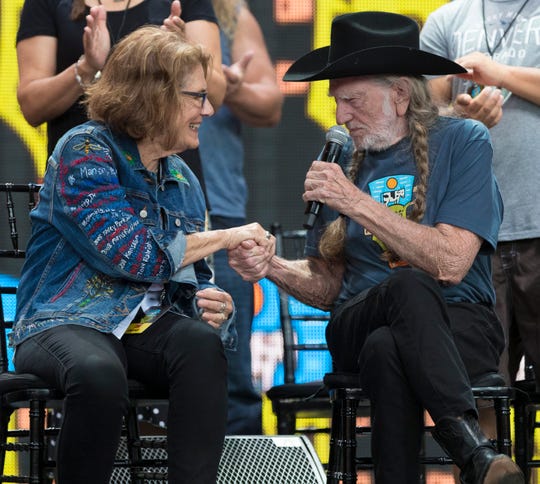 The news conference highlighted the work of farmer-led coalitions Dairy Together and Soil Sisters. And at a time when uncertainty has contributed to farmer stress, and suicides, Farm Aid introduced a partnership with the American Psychological Association to advocate for farmer access to mental health support.

The number of calls to Farm Aid’s Crisis line has doubled in the last couple of years.

“Stress in the farm community is a very real issue,” Mugar said. 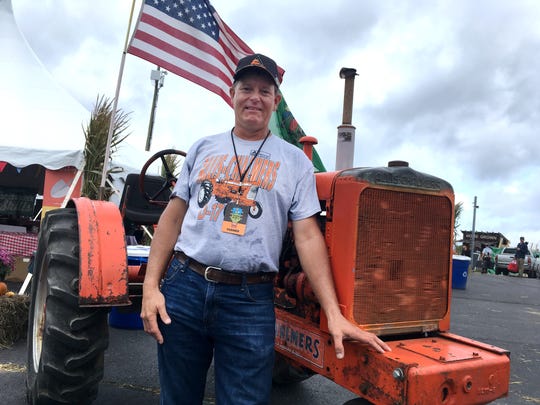 Dairy farmer Joel Greeno arrived at the festival on his 85-year-old Allis Chalmers tractor, an elegant machine that he still uses on his farm in Kendall.

It was only fitting, Greeno said, that his tractor had rolled off the assembly line in West Allis during the Great Depression, when thousands of American farmers were forced off the land and Wisconsin dairy producers, in 1933, engaged in deadly strikes over low milk prices. 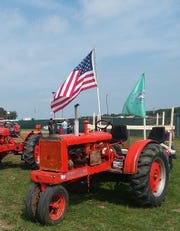 When the financial strain became too much to bear, Greeno quit milking cows a few years ago.  Now he raises heifers, steers and organic crops. And like many farmers these days, he has an off-farm job to help make ends meet.

For many folks, “You can choose to be a farm employee or you can get a job in town,” he said.

Farmers at the music concert said over and over how appreciative they were of Farm Aid’s efforts.