meta How the U.S. Ended Up With Warehouses Full of ‘Government Cheese’ :: The Bullvine - The Dairy Information You Want To Know When You Need It

How the U.S. Ended Up With Warehouses Full of ‘Government Cheese’ 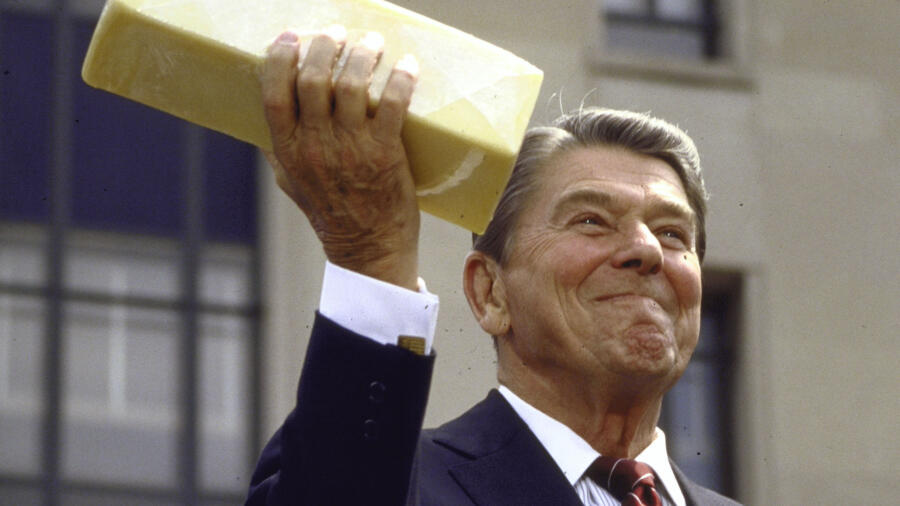 President Ronald Reagan holding up a block of cheese given to him after speech on tax reform, 1985.

If you’ve ever tasted what’s known as “government cheese,” you won’t soon forget it. Its flavor was described as somewhere between Velveeta and American cheese and smacked of humiliation or gratitude for the people who couldn’t afford not to eat it. Its color, an almost neon orange, was eye-catching. And it came in iconic stacks of five-pound blocks that made it immediately clear it wasn’t your standard cheddar or Camembert.

The cheese, distributed by a federal program during a time of volatile milk production in the 1980s recession, is iconic to this day, forming fraught memories among those who had to eat it and those who never got a taste.

The cheesy story all started in 1949, when the Agricultural Act of 1949 gave the Commodity Credit Corporation, a government-owned corporation dedicated to stabilizing farm incomes, the authority to purchase dairy products like cheese from farmers. The CCC had been around since the Great Depression, when it was created as part of the New Deal’s attempt to stabilize prices and help farmers.

During the 1970s, as Americans sat in long gas lines and watched the economy tank, they faced another crisis: an unprecedented shortage of dairy products. In 1973, dairy prices shot up 30 percent as the price of other foods inflated. When the government tried to intervene, prices fell so low that the dairy industry balked. Then, in 1977, under President Jimmy Carter, the government set a new subsidy policy that poured $2 billion into the dairy industry in just four years.

Suddenly, dairy farmers who had been hurting were flush with cash—and producing as much milk as they could in order to take advantage of government support. The government purchased the milk dairy farmers couldn’t sell and began to process it into cheese, butter and dehydrated milk powder. As dairy farmers produced more and more milk, stockpiles ballooned. As anthropologist Bradley N. Jones notes, eventually the stockpile hit over 500 million pounds, stored in hundreds of warehouses in 35 states. 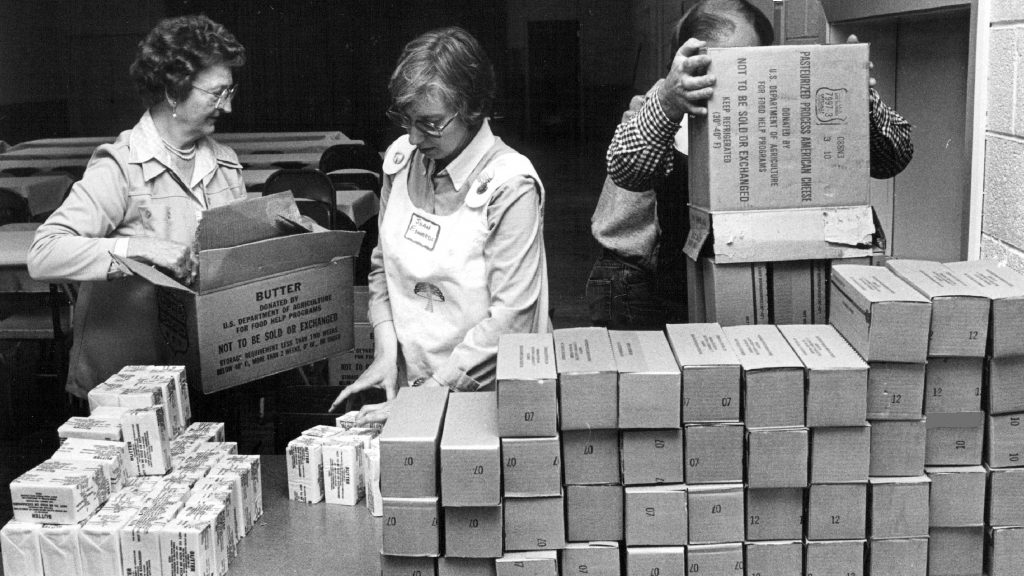 Butter and cheese being stacked and distributed during a surplus of dairy products, circa 1983. (Credit: Dave Buresh/The Denver Post via Getty Images)

The huge supply was a problem, but there was another catch: The government had no idea what to do with all that cheese. “Probably the cheapest and most practical thing to do would be to dump it in the ocean,” a USDA official told the Washington Post in 1981. There was also confusion as to how long the processed American cheese—designed to be stored for long periods of time—really lasted.

As officials scrambled behind the scenes to figure out how to deal with the cheese, the cheesy conundrum became public when Agriculture Secretary John R. Block showed up at a White House event with a five-pound block of greening, moldy cheese and showed it to the press. “We’ve got 60 million of these that the government owns,” he said. “It’s moldy, it’s deteriorating … we can’t find a market for it, we can’t sell it, and we’re looking to try to give some of it away.”

As the public got wind of the existence of all that surplus cheese, it began to sharply criticize President Ronald Reagan. He had been elected in part by bandying about inaccurate stereotypes of “welfare queens” and poor people who gamed the system, and earlier in 1981 had pledged to reduce the federal food stamp program. There were hungry Americans still suffering from the aftereffects of the recession. Why not give them the cheese?

In December 1981, Reagan relented. “At a time when American families are under increasing financial pressure, their government cannot sit by and watch millions of pounds of food turn to waste,” he said in a public address. As a result, he said, he’d free 30 million pounds of cheese from the country’s stockpile. He created the Temporary Emergency Food Assistance Program, which began handing out the blocks of processed cheese to the elderly, low-income people and organizations that served them. 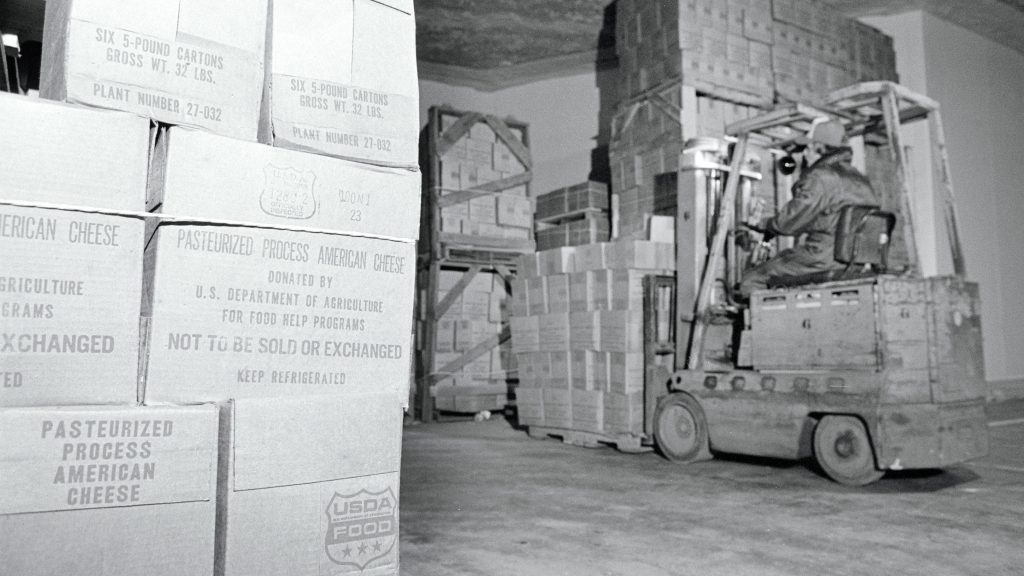 President Reagan ordered that the surplus of cheese be held in federal storage in warehouses across the country and given to needy Americans. Here the cartons are seen in an underground storage warehouse near Kansas City. (Credit: Bettmann Archive/Getty Images)

Now known as “government cheese,” the pungent-smelling (and, according to Jones, often moldy) cheese was ultimately distributed to the tune of 300 million pounds. The cheese became associated with hard times. While some were grateful, write historians Kristen Lucas and Patrice M. Buzzanel, others hated the ways in which the cheese advertised their socioeconomic status.

Today, some people recall the cheese fondly. Food writer Tracey Lynn Lloyd recalls how its weird texture made it good only for macaroni and cheese or grilled cheese sandwiches. “If someone made me a grilled cheese with government cheese today, I probably couldn’t eat it—it would be far too salty for my current taste,” she writes. “But I’d still take one bite, just for the memories.”

The government finally got out of the cheese business in the 1990s, when dairy prices calmed down once more. Decades later, the CCC, the government-owned corporation that made government cheese possible, entered the news again as the Trump administration announced it would provide large subsidies to offset the impact of its trade war with China, Canada and the European Union.

The U.S. Department Agriculture secretary Sonny Perdue announced this week that the CCC will be used to pay farmers up to $11 billion for their losses. And maybe—just maybe—the cheesy crisis of the early ‘80s is about to rear its ugly head once more. Last month, the national cheese stockpile hit an all-time high, with 1.39 billion pounds of surplus cheese sitting in American warehouses.