meta Hertfordshire dairy fire: Blaze ravages listed, derelict buildings in Codicote again :: The Bullvine - The Dairy Information You Want To Know When You Need It 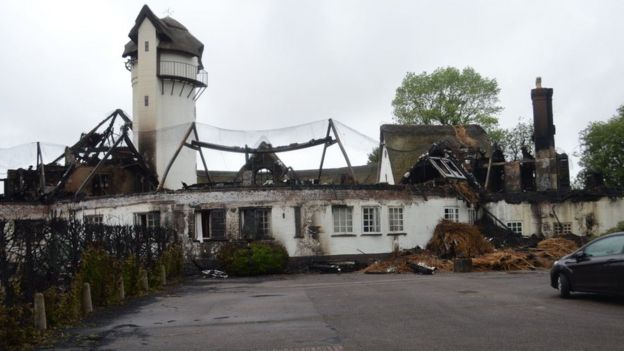 A blaze has ravaged a thatched Grade II-listed property – for the second time in four years.

More than 50 firefighters were sent to Node Court in Codicote, Hertfordshire after an alert at about 00:15 BST.

The building has been derelict since a fire several years ago.

The 1928 detached property was partially gutted by arson in 2015 which caused £3.5m of damage and was described at the time as “the largest [fire] of its kind in the UK”.

In 2017, a 24-year-old man was jailed for more than three years after admitting setting it on fire.

Crews remain in the scene damping down on Friday and an investigation into the cause will begin shortly.

According to Historic England, the building was constructed in 1928 for an American businessman as a model dairy, which at the time “set standards for hygiene and efficient dairy farming in England”.